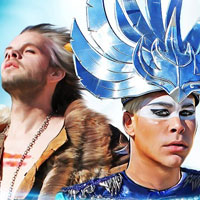 So few people dress up for music videos anymore. Thank goodness for Empire of the Sun, an Australian band that goes all out in their video for “Alive.” Sure, their sound is predicated on yanking slogans from motivational posters and regurgitating them over derivative yet infectious synth beats, but some freaky spandex-clad god of future antiquity has given them David Lynch’s key to the costume shop from Dune. (In fact, their forthcoming album, due out June 18, is called Ice on the Dune.) The result looks like an episode of Mighty Morphin Power Rangers directed by Alejandro Jodorowsky.

Have we mentioned that Empire of the Sun is huge in Australia? Really.

When so many recent videos feature performers doing little more than partying, preening, and pouting for the camera (Kendrick Lamar’s “Bitch, Don’t Kill My Vibe,” Colleen Green’s “Taxi Driver,” Lissie’s “Shameless“), isn’t it nifty to see a bunch of grown-ups running around in winged helmets? Doesn’t it make you feel just a little bit more “alive”?