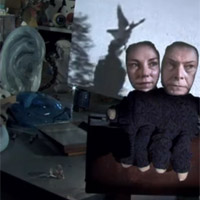 Last week on his 66th birthday, David Bowie dropped the brand new video for “Where Are We Now?” in which he seems to be revisiting his time in Berlin in his mind. The clip is by CalArts alum Tony Oursler, who has collaborated with Bowie on other projects, most notably on the video for “Little Wonder,” which was directed by Floria Sigismondi.

Then there’s “Little Octopus Climbing Over Rock,” a simple but incredibly catchy tune devoted to an intrepid cephalopod. Written by Parry Gripp (the internet genius known for “Space Unicorn“), it’s less than one minute long, but it delivers exactly what its title promises: an octopus climbing over a rock. And it leaves you wanting more.

Which is the more trenchant deconstruction of the music video as an art form? You be the judge.