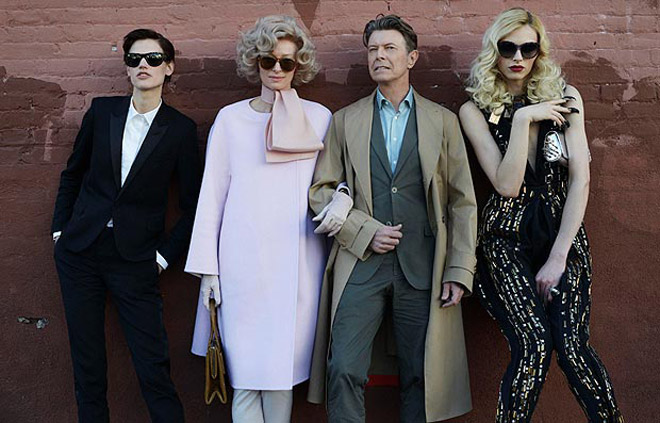 If you’re looking for an onscreen avatar for otherworldly, gender-bending rock star David Bowie you couldn’t find a more perfect fit than otherworldly, gender-bending actress Tilda Swinton. The resemblance is so striking it’s like they were separated at birth. But in Floria Sigismondi’s video for “The Stars (Are Out Tonight),” the two aren’t siblings or emissaries from an alien race, they’re a fossilized married couple.

In the video for the second single (check out the first one here) from the Thin White Duke’s new album, The Next Day (it doesn’t hit stores unti March 12 but the entire album is streaming on iTunes for free), Bowie plays an aging version of himself and Swinton is his bouffant-topped wife. They’re content with their dull lives in their dull mansion — until they’re tormented by some teenage wildlife. Are the kids in their house or merely in their heads? The video spoofs clichés about Los Angeles, celebrity, and tabloid culture while casting a nostalgic look at the chaos of youth. On a meta-level, it’s also a cautionary tale about an alluring music video paired with an exceedingly forgettable song. In “The Stars (Are Out Tonight)” Bowie is shown doing something he’s never done before: asking the neighbors to turn the music down.