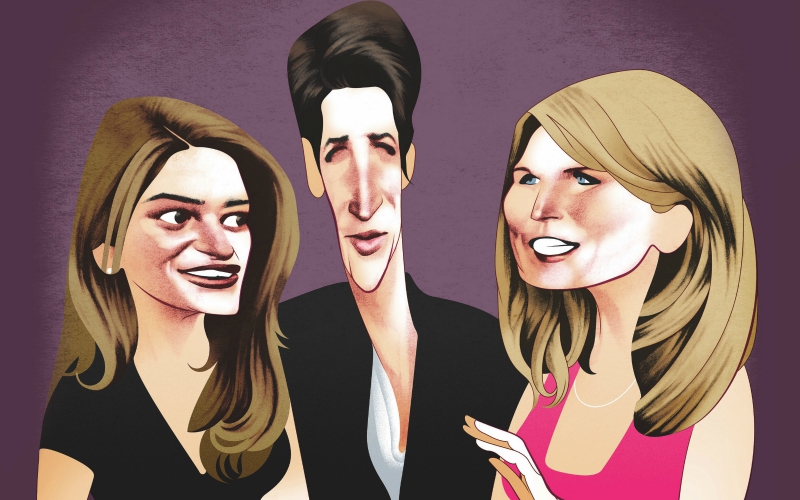 Since January 20, 2017, no movie or TV show has been able to compete with the spectacle of American self-abasement. As the 45th presidency descends into psychodrama for which the price of admission is national shame, MSNBC has edged perennial front-runner Fox to become the top-rated cable news network by some metrics, and last fall, when politics, journalism, and entertainment were swept up in revelations of sexual abuse—with one of the most egregious offenders being the one who lives in the White House—what was conspicuous was the extent to which MSNBC’s resurgence has been driven by women.

The dominance of MSNBC’s female reporters, anchors, and commentators is more striking when compared with competitors CNN, with its all-male prime time, and Fox, whose few formidable women such as Megyn Kelly have bolted, telling tales of sexual predation by Fox’s late mastermind, Roger Ailes, and loudest mouthpiece, Bill O’Reilly.

The growing feminism of MSNBC doesn’t seem part of any grand scheme. Over the past couple of years MSNBC has increasingly featured all-female roundtable analyses, such as those that followed the 2016 national conventions, not as a gimmick by which the patriarchy amuses itself with the ponderings of the gentler sex but rather as a straightforward convergence of talent and tenacity. To paraphrase an old TV ad that only an old magazine writer would remember, the women on the set got there the old-fashioned way: They earned it.

Which is to say they triple-earned it, since that’s how worthy women get any-where. To be sure, MSNBC is hardly a man-free zone, what with warhorse Chris Matthews, whose own comments about a pretty face or two have gotten him into some trouble lately, and suave Brian Williams, redeeming himself from a scandal a few years back when he gilded his résumé with a few too many battle heroics.

But the network’s female dominance has evolved by way of intrepid Kristen Welker, Kasie Hunt, and Hallie Jackson covering the White House and Congress; Joy Reid, the most incisive commentator in TV news and the one least inclined to put up with nonsense; and influential Mika Brzezinski in the morning and the departed Alex Wagner, now at CBS after establishing at MSNBC a prototype for smart daytime political talk.

With due respect to all of them, however, the keepers of MSNBC’s current identity are Rachel Maddow, Nicolle Wallace, and Katy Tur, each distinct from the others while forming a gestalt in the resistance to the ongoing degradation of the American idea. The network’s star, Maddow is the daughter of an Air Force captain and a California school program administrator. The first openly gay Rhodes scholar, she likes to say her politics are progressive in the manner of Eisenhower-era Republicanism, but you have to wonder what Eisenhower Republicans would have made of her.

Maddow has a wit and sense of narrative no other anchor has. Her lead stories open with long-ago-and-far-away historical nuggets that inevitably unfold into the day’s headline. It comes as a shock to learn that she deals with depression since on air she’s irrepressible, which has gotten the better of her judgment now and then. Her reputation as the left’s ever-trusted Edward R. Murrow took a hit last spring when she hyped acquisition of the president’s tax returns and kept viewers waiting from one commercial break to the next only to finally reveal a single sheet of a single return from a single year.

But what distinguishes Maddow besides a sweeping intelligence is her graciousness: Republican ex-senator Rick Santorum goes on her program because he knows he’ll get a fair hearing that never degenerates into character assassination; and that Maddow can be civil to White House hack Kellyanne Conway is grounds for a Nobel Peace Prize. Maddow counts among her early mentors both the aforementioned Ailes at Fox and left-wing psycho Keith Olbermann, once MSNBC’s raging pooh-bah, which explains the congenital courtesy that paved the way for appearances on her show by Nicolle Wallace, communications director for George W. Bush. Wallace was also senior advisor to John McCain’s 2008 campaign against Barack Obama, declining to vote at the last minute when day-in and day-out proximity to her candidate’s running mate convinced her Alaska Governor Sarah Palin couldn’t be placed a heartbeat from the presidency.

How you know you’re getting through, I guess?https://t.co/R3mg2JubDf

Following that election and subsequent publication of a novel about the first woman chief executive, Wallace now hosts Deadline: White House, cable’s best political show. As a former operative who dealt with the media on an hourly basis, Wallace assembles a consistently impressive array of reporters, politicos, and brainier pundits and offers a bracing understanding of what’s going on in the government these days to the extent it can be understood.

Wallace is important because she’s not exactly a Bolshevik, whatever may be MSNBC’s liberal reputation and notwithstanding its history composed of Pat Buchanan, Ann Coulter, Tucker Carlson, Peggy Noonan, and George F. Will. Before many Republicans, Wallace suspected that if you cracked open the soul of the billionaire who would lead the free world, a swarm of locusts would emerge, and her sunny humor off sets a seething sense of disgust that occasionally leaves her sputtering and her guests barely getting a word in edgewise.

On her show she’s often surrounded by fellow exiles of a disenchanted center-right that doesn’t believe conservatism excludes the ability to morally distinguish between white supremacists who run a woman over and the people protesting them. Among them is old McCain campaign buddy Steve Schmidt, whose dismay at what’s happened to his party and country is expressed with the quietly eloquent fury of a prairie preacher.

When the sex-abuse scandal broke in October, no one better negotiated the alternating demands of indignation and perspective than Wallace. Sometimes sitting next to her on those broadcasts was Katy Tur, who was a weather reporter and freelancer with a semi-legendary if nameless French boyfriend when fate put her in the right time and place.

Watch Tur interview anyone for more than three minutes and you wonder whatever possessed a swaddled real estate swindler turned reality-TV racketeer to suppose he hadn’t met his match. Relentlessly covering Donald Trump’s terrorism against Latinos, POWs, and the physically disabled, not to mention the women he threatens to sue for having been his victims, Tur frequently stared down howling minions at events when the candidate enlisted the mob against the girl kicking his butt every night. As described in her book, Unbelievable, Tur also figured out sooner than anyone else that in presidential politics, zeitgeist beats demographics and that a grim surprise might be in store on election night.

It’s a small consolation that long after the 45th presidency is blown off its hinges by its own gusts of duplicity, betrayal, and dementia, Katy Tur, the Christiane Amanpour of campaign coverage, will still be reporting from the front line of the second American civil war. By then it may be time for someone else to knock the women of MSNBC off their pedestal in the name of a free and vibrant press. But that time isn’t now.