Home Dance The Mr. Darcy of Your Dreams May Be in Pasadena 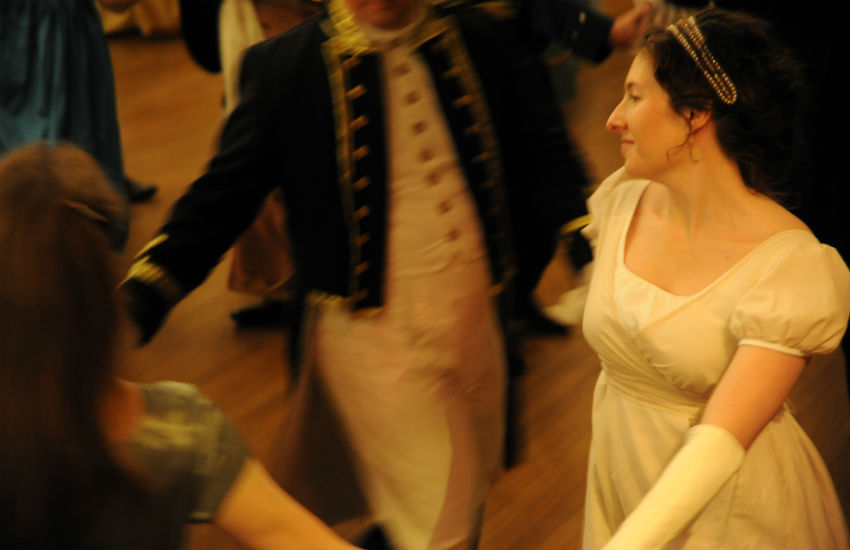 Courtesy of the Society for Manners and Merriment

While it is no longer a truth universally acknowledged that a single man in possession of a good fortune must be in want of a wife as it was in Jane Austen’s day, you can still find your soul mate at a ball—yes, even in L.A. Or at least, at the Society for Manners and Merriment’s Jane Austen Evening this Saturday at the Pasadena Masonic Lodge you can don a tuxedo or a gown and gloves, sup on high tea, listen to a lecture about what else Mr. Darcy and Ms. Bennett would have quaffed, follow the steps of Regency-era dances, and encounter a community of fellow enthusiasts for historical reenactment.

Founded in 1998, the Evening is a Regency-era ball dedicated to Regency-style dancing (no dance after 1819 is performed). Guests are requested to come in formal attire and bring their own teapots. For Tim Steinmeier who, along with his wife Gayle, runs the Society—a registered state nonprofit whose mission is to promote and protect regency dance—and produces the ball, the aim is to recreate an experience Austen might have had. “We want people to step back in time,” he says. “When they walk through those doors and they’re in their costumes, or in their fancy dress, they become different people than in your everyday society. They act more genteel, more mannered, you know, nicer manners.”

The event’s link to Austen is almost incidental, but has been essential to its popularity. Walter Nelson, the ball’s founder, traces his decision back to a box office phenomenon. “There were a lot of Jane Austen movies out in 1998—and I think, I think one of the reasons that this has been such a success is that I shamelessly appropriated her name,” he says, adding, not without some evident pride. “We have, in fact, sold out every single ball except one since 1998. And the only one we didn’t sell out was when we moved to a much larger hall and it took a year for demand to realize that supply had increased.”

This year, the Evening was more popular than ever. “It’s gone from selling out in a month, actually longer, to a month, to two weeks, to a week, to five minutes this year,” Steinmeier says. “And the fact that it looks like we have twenty five to thirty-odd percent newcomers this year tells us that there’s still a brand new demand for it.”

But the Evening is not the only event of its kind; Los Angeles is host to a large community of what Nelson calls “the Tribe” and a corresponding number of vintage balls. There is the Avalon Ball that celebrates the 1920s and ‘30s, The Lanterman Ragtime Tea Dance set just prior to the First World War, the Social Daunce Irregulars’ Victorian Grand Ball, and the Victorian Tea and Dance Society’s monthly tea dance. Every week, Nelson circulates emails to about 4,000 people, updating them on events dealing with the eighteenth century through the 1960s. The roots of the community, however, are in the Renaissance Faires of the 1970s. “A lot of the community that is at the core of many of these events is actually the community that started at the renaissance faire,” Nelson says. “The same people have moved on to other things.

“These events appeal to people who feel, as Nelson says, there is “something lacking in today’s world.” The Evening’s featured speaker, Richard Foss, founder of the Culinary Historians of Southern California and most recently the author of Food in the Air and Space, has a similar take on the event’s appeal. “The Jane Austen Evening is about more than the food and drink, of course,” he says. “It is about trying to recreate a grand style of dining that had a good deal of ceremony and ritual at the table.”

The Jane Austen Evening is first and foremost a social event, though. “There have been more than one couple that have gotten together at our balls,” Nelson quips. “A lot of people find each other at these events. That’s how I met my wife many years ago.”