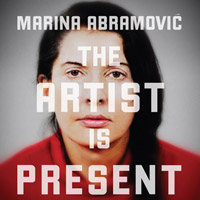 “The hardest thing is to do something which is close to nothing.”

That’s how Marina Abramović describes “The Artist is Present,” her 2010 exhibition at New York’s MoMA. Seven hours a day for six days a week, the 63-year-old performance artist sat in a chair in the middle of the museum’s atrium, inviting patrons—an estimated 750,000 from all over the world—to sit directly across from her in another chair. She did this for three straight months.

In Marina Abramović: The Artist is Present, director and cinematographer Matthew Akers chronicles the exhibition—its buildup, logistics, and reception—giving viewers an intimate understanding of an artist who, for almost 40 years, has been called everything from insane to radical to genius.

Born in Belgrade, Yugoslavia to two national heroes of the Yugoslavian partisan effort during World War II, Abramović says she grew up in a household with very little love and overzealous discipline. (Her mother treated her like soldier—sometimes waking her up in the middle of the night to fix her bed if she was sleeping too messily.) Art, for the young Abramović, was to be an escape from this order.

The documentary is rich with archived footage of Abramović’s early works, and Akers uses it in a way that doesn’t make the audience feel too uncomfortable. Many of Abramović’s first works—such as driving a van in a circle for 16 hours while shouting numbers over a megaphone or flogging herself or drawing a pentagram on her abdomen with a razor blade—catapulted her into contention rather than stardom. In her twenties, thirties, and forties Abramović warped the paradigm of performance art, a genre originally created to challenge the medium of painting. As her work took hold of her life, her radical influence expanded the boundaries of performance art.

Akers’ filmmaking is clean, and the archival vignettes are nicely pieced together, but a couple storylines are abruptly introduced and not thoroughly explored. The audience learns that the pony-tailed man in the archived clips is Ulay, a performance artist who was once Abramović’s lover and closest collaborator. Though the love storyline makes Abramović relatable in a way that might seem alien to extreme performance artist, the film touches on their relationship too sporadically. Another thread left mostly unexplored is the story of the young artists who are chosen to recreate some of her most monumental works alongside “The Artist is Present.” Abramović invites them to her home in the Hudson Valley for a master class in performance art, but the couple dozen students fade in and out of the documentary too quickly.

Where Akers is most successful is in his sparsity and control. The director doesn’t let the tangents take over the film. He gives the audience a taste of the artist’s personal life but avoids disaster by focusing on the exhibition. Akers mashes up behind-the-scenes footage and professional interviews to set the stage for the MOMA reveal. The result is an expanding balloon of anticipation that is only fully realized when the artist sits down for the premiere of her exhibit.

At the crux of “The Artist is Present” is Abramović’s hunger for a charismatic space and a relationship. With the exhibit, Abramović opens herself up and allures the audience, attempting to forge a new bond and experience with every single person that sits across from her. As her curator Klaus Biesenbach succinctly explains: The crowd is Abramović’s lover.

Just as Abramović yearns to seduce spectators with her physicality, sense of purpose and tremendous focus, Akers strives to seduce moviegoers. It’s no easy task, but the fluid, well-paced film manages to lure and mesmerize.