Home Dance These Creative Movement Workshops for Non-Dancers Will Make You Forget You Can’t... 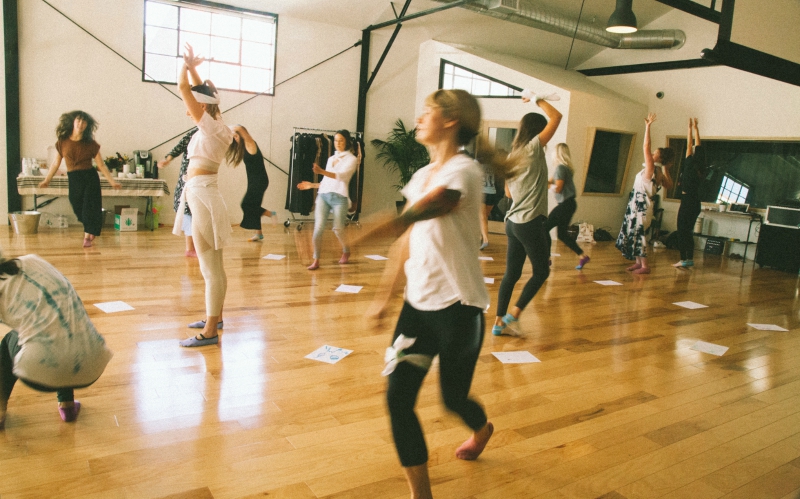 Sarah Rodenhouse is a professional dancer, and the president and co-artistic director of Mashup, an all-female contemporary dance company based in L.A. But she’s equally passionate about working with people who don’t have a background in dance, which is why she started Moved L.A., a series of creative movement workshops aimed at non-dancers.

What is a creative movement workshop? It’s not a dance class—there’s no choreography to pick up—but you’ll be moving to music. It’s not a party, but there’s alcohol and kombucha to help people loosen up. It’s not an exercise class, but you might get a workout without noticing. Rodenhouse says, “I’ve had people say to me ‘I’m a little sore the next day,’ but while it’s happening, that’s not the main focus of it, because you’re having so much fun.”

That fun, nonjudgmental vibe is what Moved L.A. is all about. Each workshop starts with participants naming songs that make them want to move. Rodenhouse builds the class playlist from those suggestions. From there, she says, “I’ll do one short guided warmup and then the rest of the exercises are all just ways for people to find their own way of moving.” She offers prompts for inspiration—such as, “Move like popcorn”—and people can interpret them in any way they choose. In another exercise, she has everyone move with their eyes closed. She says, “It’s giving you the freedom to be almost a child. To be creative and think quickly and move your body and do what feels good and what feels natural to you, even if you think it looks awkward. It’s your own natural movement, and it’s your own vibe, and it’s your own feeling.”

On Tuesday, April 3—aka World Party Day—Moved L.A. is hosting a donation-based workshop at its space in Frogtown, and every attendee gets a gift to take home. “The idea of World Party Day is a day where everybody is supposed to stop what they’re doing and party. When I think about that, I think about music and moving, and dancing just to celebrate the joy of existing,” says Rodenhouse.

Moved L.A. is located at 2926 Gilroy St., across from Frogtown Brewery. The World Party Day event is Tue., April 3, 3-5 p.m. You can reserve a space on the Moved L.A. website, which also lists upcoming workshops.

RELATED: 10 Totally Free Things to Do in April That Are Actually Fun