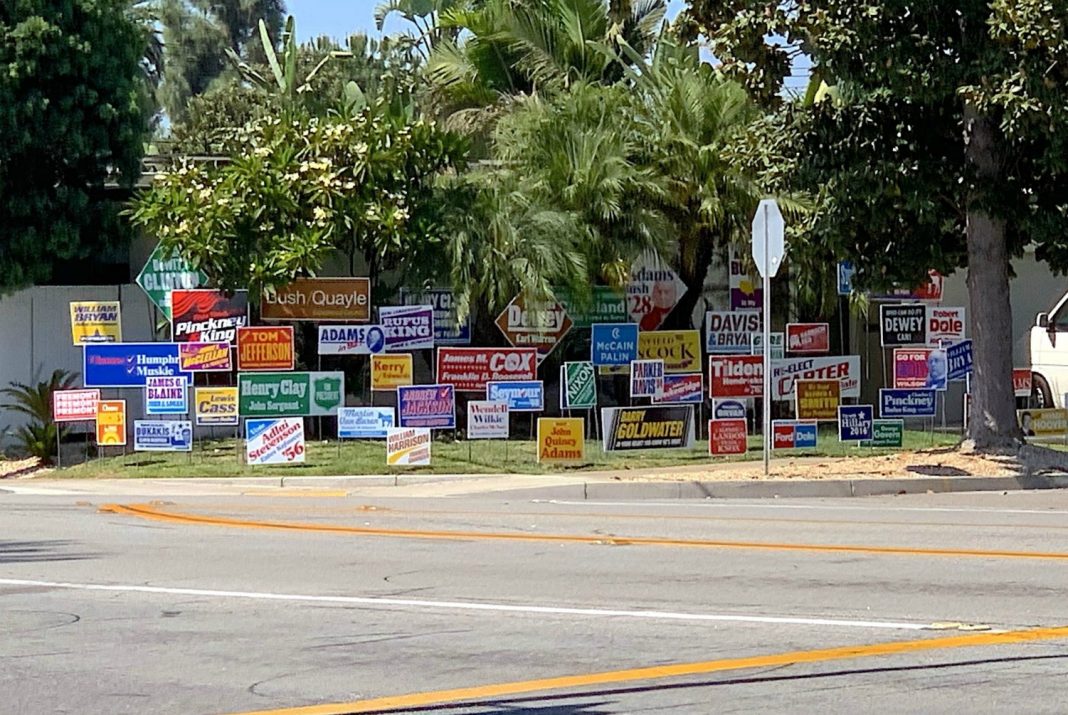 With less than four weeks until election day, you might be desensitized to the flood of political signs in medians and on telephone poles. Your eye might just glaze over the 58 corrugated plastic signs on Deb and Jon Webb’s lawn in Orange, until you notice that some of the candidates have been dead for 200 years. “America Needs a Change” screams the red and yellow placard for “Tom” Jefferson. The project is an art installation dedicated to all the losing presidential candidates since 1789. Nina Katchadourian’s Monument to the Unelected was originally commissioned by the Scottsdale Museum of Art in 2008, and it’s on view in Southern California thanks to Grand Central Art Center in Santa Ana.

The artist, working with designer Evan Gaffney, gave each candidate a modern makeover. Thomas Dewey, more famous for the photo of his opponent holding up the “Dewey Defeats Truman” headline than for his political achievements, gets a bold “Who Can Do It? Dewey Can” sign. Walter Mondale and his VP pick, Geraldine Ferraro, get floating gender symbols. Katchadourian added another male/female ticket when McCain/Palin lost in 2008 and updated the piece again in 2012 and 2016. A new sign will be created after November 3.

Some losing candidates went on to win later elections (Nixon’s campaign sign pairs him with his losing VP partner of 1960), but some names are just lost to history. Ol’ Thomas Pinckney lost the election and went back to subjugating slaves on his plantation. A few years after losing the election, candidate Samuel Tilden died alone at his mansion. His tombstone reads “I Still Trust the People.”

Five copies of the piece are currently on view nationwide: on gallery walls in New York and San Francisco; a museum in Scottsdale, Arizona; in Madison, Wisconsin, and via GCAC, which chose to exhibit the signs on a suburban lawn in Orange. You’ll find them tucked into a corner garden, flanked by palms and the soaring rooflines of a landmark tract of midcentury Eichler homes. The artwork will remain on display until November 17. The artwork seeks to “highlight the U.S. history for peaceful transition of power.”

We hope to know the winner of this year’s election by then.

Monument to the Unelected is viewable on the lawn at 896 S. Oakwood St., Orange; note that it’s private property and visitors should respect the homeowners and neighbors.