Home Art The Monopoly Man is Alive and Well 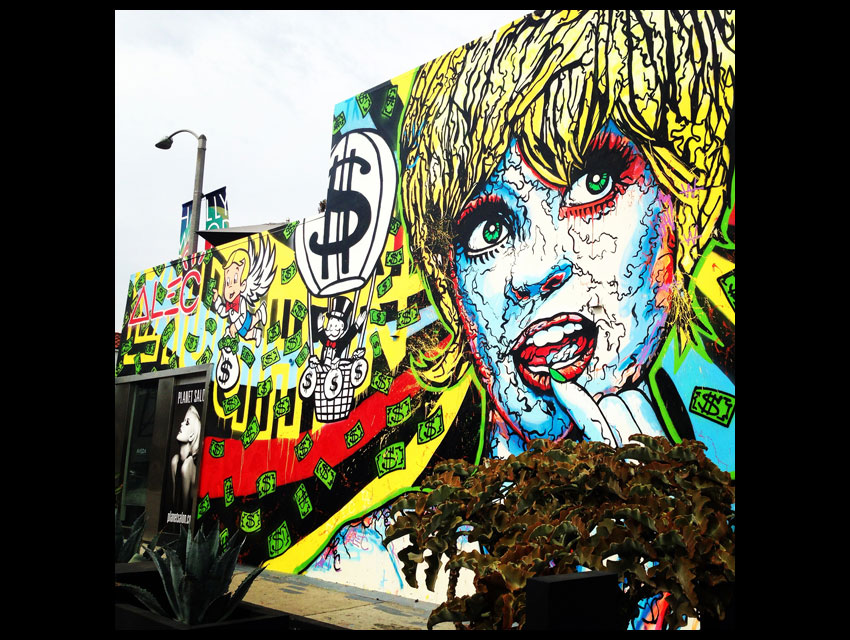 The Monopoly Man is as iconic as Ronald McDonald and no less contentious. That’s why Alec Monopoly chose him as a mascot. If you drive anywhere in Los Angeles, you know that no location is off limits for Monopoly from electrical boxes on Coldwater Canyon to a sidewalk on Burton Way.

When did you first start identifying with the Monopoly characters?
Around the time Bernie Madoff was on trial for the largest ponzi scheme in history and the economy was in a downward spiral. I started tagging Bernie Madoff’s face all over L.A., then one night it randomly connected that Madoff almost looked like the Monopoly Guy. I painted that in a few places and it stuck.

What’s happening with your hotel installation in Miami?
The SLS has been a very cool hotel to partner with for Art Basel; they basically gave me the keys to the castle for an entire week. We’re wrapping the entire front facade of the building with one of the paintings that will be in my exhibition.

Who are your art heroes?
Basquiat and Warhol have always played a huge role in my art and even my life. I’ve become semi-obsessed with Salvador Dali and will actually be introducing a new series of works called “Masters” featuring renditions of my favorite artists portraits.

What’s next for you?
2015 is already shaping up to be an insane year. I have my first large scale, clothing collaboration coming out, which I can’t wait to announce, a solo museum exhibition at MOCA Bangkok, and solo exhibits in Hong Kong, Jakarta, and Moscow. I love to travel and experience new cities and I feel blessed that I’ve been able to see the world doing what I love.

What would you tell young kids who want to be artists?
The hardest thing about being an artist in my opinion is having confidence in yourself. To this day I’m always second guessing everything, but you just have to keep blinders on and do what you love and paint what you identify with. The rest will fall into place.

WHERE: You’ll spot this piece just outside of Planet Salon at 8126 Melrose Avenue.