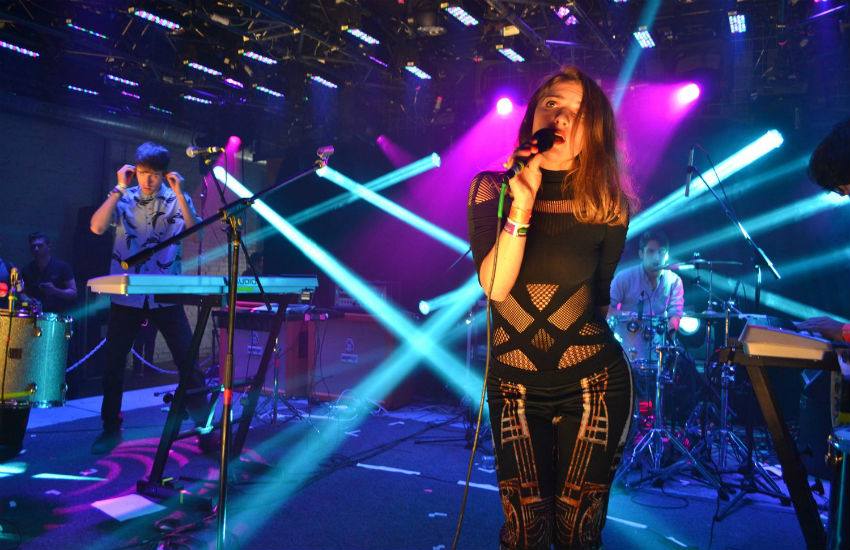 L.A. electro pop duo Holychild’s music is infectiously catchy. On the one hand, the duo’s manic vibe—part electronic art project part, dance music extravaganza—is balanced by frontwoman Liz Nistico’s calm and confident stage presence and animated voice, which serves more as an organic instrument backed up by frantic sampled rhythms. Nistico met Holychild’s other half, keyboardist and drummer Louie Diller, when both were students at George Washington University in Washington, DC and have been performing together since 2011. After cruising around the East Coast developing their sound, which they describe as “brat pop,” Holychild finally settled down in L.A.

Last year the band released their debut EP, Mindspeak, which included the song “Happy With Me,” the video for which became an instant viral success on YouTube. Holychild deal in shamelessly glittery pop music driven by a relentless do-it-yourself work ethic. Holychild manage their affairs themselves: Nistico even designs and sews the flashy stage outfits the band dons at concerts, and the three-part Mindspeak video series—which features the tracks “Happy With Me,” “Everytime I Fall,” and “Pretend I Believe”—were conceptualized and produced independently.

Tonight, Holychild begin their residency at the Echo, where you can catch them every Monday throughout January. Here are five compelling reasons to check this band out for yourself.

1. They are venue quick-change artists. In April last year, Holychild performed at the opening for the exhibition Robert Heinecken: Object Matter at MoMA in New York. For that one night only, the power duo turned the august museum into a veritable underground dance club complete with a packed dance floor, purple lights, and canned beer instead of fancy wine coolers.

2. They take pop seriously. After touring the East Coast in 2013 with a handful of confirmed gigs, the duo went on something of a soul journey in an attempt to find their sound instead of returning home after the last date, crashing on air mattresses up and down the coast in the process.

3. They are experimentalists. Part of the stripped down aesthetic of Holychild comes from the fact that Nistico’s singing works as a sort of multilayered instrument. The singer loops and dubs her vocals live during performances creating a thick tapestry of harmonies.

4. They are astute culture critics. Holychild’s videos are visceral to the point of being abrasive but behind the ADD pacing and strobe light like sequencing there’s a profound message. Gender, sex, and objectification of the female body are examined cleverly and with subtle (and not so subtle) sardonic wit.

5. They operate on their own terms. Holychild is an independent endeavor* and tapping into the do-it-yourself philosophy is working for them. The video for “Happy With Me” has more than 100,000 views on YouTube due to word-of-mouth and stellar live performances only.
*Correction: Holychild signed with independent label Glassnote Records in 2014.