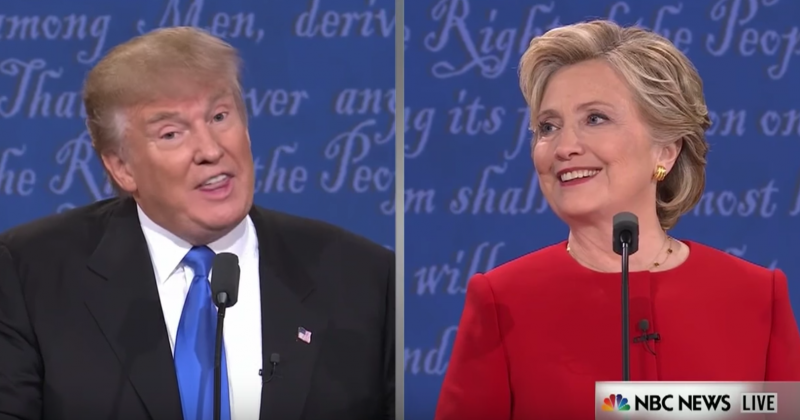 The consensus among non-insane people is that Hillary Clinton won the first debate last night. All politics aside – she was better prepared, she committed no major unforced errors, and she had Donald Trump on the defensive, forcing him to waste time explaining himself when he could have been criticizing her. Undecided voters may not love her, but they respect what she did last night.

Of all of the “only this election” moments last night – “braggadocious,” “the cyber,” and “call Sean Hannity” come quickly to mind – one stands out, and it’s the moment when Clinton realizes that she just won the debate.

My comments in bold.

TRUMP: I have a much better — she spent — let me tell you — she spent hundreds of millions of dollars on an advertising — you know, they get Madison Avenue into a room, they put names — oh, temperament, let’s go after — I think my strongest asset, maybe by far, is my temperament. I have a winning temperament. I know how to win. She does not have a…

OMG he just put his opponent’s BEST LINE OF ATTACK IN HIS OWN MOUTH.

DOES ANYONE KNOW WHAT ANY OF THIS EVEN MEANS WHAT IS A BLUE SCREEN IS TRUMP HAVING A STROKE?!

And here’s the moment.

She knows she just won the debate. Trump just took a desperate swing, and he missed. He brought up his biggest weakness on his own – his poor temperament – and not only told people about it, but he confirmed its existence. He also missed a golden opportunity to mention Clinton’s many lapses in judgment. She then did what a savvy politician playing the most difficult game at the highest level is supposed to do. She pummeled him.

CLINTON: Let’s talk about two important issues that were briefly mentioned by Donald, first, NATO. You know, NATO as a military alliance has something called Article 5, and basically it says this: An attack on one is an attack on all. And you know the only time it’s ever been invoked? After 9/11, when the 28 nations of NATO said that they would go to Afghanistan with us to fight terrorism, something that they still are doing by our side.

Clinton mentions specifics. She’s done her homework. She wants you to know that. No “blue screens” here.

CLINTON: With respect to Iran, when I became secretary of state, Iran was weeks away from having enough nuclear material to form a bomb. They had mastered the nuclear fuel cycle under the Bush administration. They had built covert facilities. They had stocked them with centrifuges that were whirling away.

And we had sanctioned them. I voted for every sanction against Iran when I was in the Senate, but it wasn’t enough. So I spent a year-and-a-half putting together a coalition that included Russia and China to impose the toughest sanctions on Iran.

And we did drive them to the negotiating table. And my successor, John Kerry, and President Obama got a deal that put a lid on Iran’s nuclear program without firing a single shot. That’s diplomacy. That’s coalition-building. That’s working with other nations.

Unlike you, Donald, I have negotiated something bigger than licensing my brand to a steak company.

CLINTON: The other day, I saw Donald saying that there were some Iranian sailors on a ship in the waters off of Iran, and they were taunting American sailors who were on a nearby ship. He said, you know, if they taunted our sailors, I’d blow them out of the water and start another war. That’s not good judgment.

TRUMP: That would not start a war.

Yes, it would, you dummy. Over something really stupid.

CLINTON: That is not the right temperament to be commander-in- chief, to be taunted. And the worst part…

TRUMP: No, they were taunting us.

Good lord, you’re making her point for her. Again.

This is the second time she has mentioned nuclear weapons, and that’s by design. Because Trump with nukes is a thought scares the ever-living hell out of some independent voters. She knows this.

CLINTON: … have a good time, folks.

CLINTON: And, in fact, his cavalier attitude about nuclear weapons is so deeply troubling. That is the number-one threat we face in the world. And it becomes particularly threatening if terrorists ever get their hands on any nuclear material. So a man who can be provoked by a tweet should not have his fingers anywhere near the nuclear codes, as far as I think anyone with any sense about this should be concerned.

That’s the kill shot. He lacks the temperament to command our nuclear arsenal.

This was Trump’s best attempt at a kill shot:

And this was Clinton’s:

CLINTON: A man who can be provoked by a tweet should not have his fingers anywhere near the nuclear codes, as far as I think anyone with any sense about this should be concerned.

Hillary’s Whew Dance has received quite a bit of coverage since last night, but most of the stories miss the point. The significance was not social media’s reaction to it or the “humanizing element” that’s connected to the weird “she should smile more” notion that can’t die soon enough. (Did anyone tell Truman he should smile more? LBJ?)

The Whew Dance gave us the Clinton many Americans needed to see – in the moment, at the top of her game, totally aware, the opposite of the aloof Hillary who doesn’t know what classified email is or that private email servers can be hacked or how bad all her money-raking from Wall Street looks to Main Street America. The Whew Dance was confidence personified. She’s in the moment and can see what’s happening in Matrix time. We need a president who can do that. Not one who literally says things like this, one more time, because it can’t be repeated enough:

We know exactly how you felt, Donald.