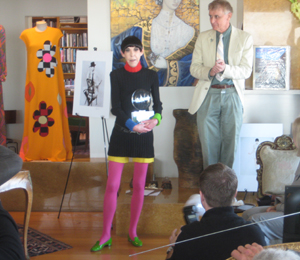 The Museum of California Design bestowed it’s annual award on the late fashion designer Rudi Gernreich on Sunday. The swinging party was held in an art-stuffed villa nestled under Case Study House #22 in the Hollywood Hills and celebrated Gernreich, the creator of mod, graphic fashions and his most famous model, Peggy Moffitt, seen here with MOCAD director Bill Stern. Original Gernreich fashions and enlarged photographs of Moffitt by her late husband William Claxton were the highlight of a live auction. When Claxton’s famous image of her in Gernreich’s “Monokini’ went up for bids, Moffitt shouted out “It’s a topless bathing suit” and the crowd roared. The mod, mod, mod, mod crowd included Vidal Sassoon, Peter Shire and Charles Phoenix.