Reverend Dr. Martin Luther King Jr. was so much more than a quote to post on Twitter–and a new art series curated by Patrisse Cullors and Noni Limar of the Black Lives Matter Global Network Foundation attempts to remind us of just that. The series asked artists to share images of and reflections on Dr. King in moments of rest, joy, and celebration.

“This MLK day, BLMGNF is centering life, love, joy, rest, and pleasure. We will not allow white supremacists violence to deter us from the dignity and humanity of Black life,” says Cullors, who is also cofounder and executive director of the foundation. “Every artist in this series was handpicked because each of them center love as part of their work. We know MLK believed in love as the center of his work and at the center of the civil rights movement. Join us in honoring his legacy through this beautiful and transformative artist series.”

The series launches today with works from six artists, Derrick Adams, Shaina Simmons, Christian Scott, Nikki Blak, Rodney Diverlus, and Melanie Jean Baptise Charles, who work in a variety of media, including poetry, dance, music, and visual art. BLMGNF will be sharing more from the series on the foundation website and on Instagram.

“We need a day to dream. A day to center life and leisure,” says co-curator Limar. “We, who believe, like MLK did, in the radical relentless pursuit of freedom, must also stop to dream, to be, to live.” 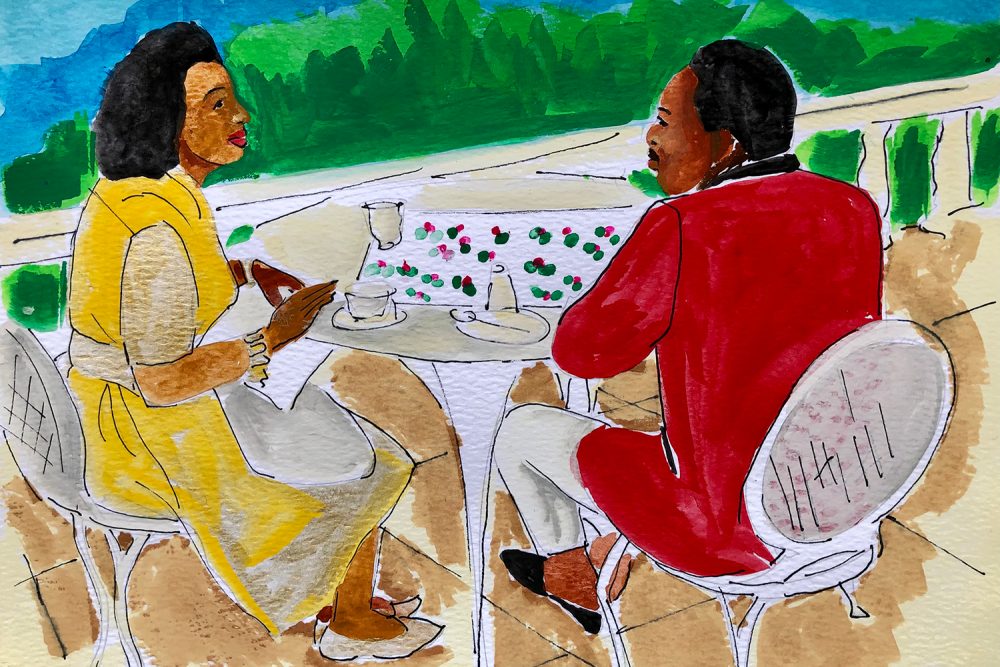 “This work is inspired by a 1967 Ebony Magazine article titled, MLK’s Tropic Interlude. Martin Luther King, Jr. was in Ocho Rios, Jamaica, for three weeks working “most of the day until way into night” to finish his book, Where Do We Go From Here: Chaos or Community? During the last week of his stay, his wife Coretta joined him, and they enjoyed moments of leisure: lounging by the ocean, cooling off in the pool, and dining at a cliffside terrace. The images are important because the most familiar images of MLK show him during his fight for our civil rights. These rare images from Jamaica are a necessary reminder that during our challenging work towards equality, we must also spend time in restorative self-reflection and regeneration, in order to continue and thrive.” – Derrick Adams

“I was honored to create this commissioned piece in honor of one of the most outstanding movement leaders and thinkers of our era, Dr. Martin Luther King Jr. As the descendant of a child of the civil rights movement of the 1960s, not only do I reap the socio-political benefits of the foundation laid by King and his peers, but I am like so many also incredibly inspired by his legacy. In these times of radical social change, it’s only right that we would reflect on and honor the work of such an iconic leader and movement.” – Nikki Blak

“Simply, an improvisation, a meditation, and a dance party with and for MLK. Using his final ‘mountaintop’ speech in 1968, and Ravyn Wngz’ viral press intervention in 2020 as acts of remembrance, of solemnity and release.” – Rodney Diverlus

Chief Christian Scott aTunde Adjuah is a two-time Edison Award winning and five-time Grammy Award nominated musician, composer, and producer. For the series, he premieres the new Adjuah Bow, inspired by “MLK, the beauty of Black history and traditions, reevaluation in the era of misinformation, and love and reverence for Black women.”

“Brooklyn-based singer, songwriter and producer Melanie Charles continues her sonic journey to Make Jazz Trill Again with a meditation on Martin Luther King’s message delivered in his speech, Where Do We Go From Here? In a letter to her higher self, she flows into a mantra to “chill in love” reinforces the need for Black joy, care and relaxation along the road to freedom.” – Melanie Charles

Shot an produced by blue feedback; edited by Rena Anakwe

“Twerk on Washington is a declaration of freedom and healing. Advocating for the decolonization of oversexualizing Black women’s bodies to reclaim an ancient sacred dances of liberation and wellness. Sampling the “I Have a Dream” by the great Dr. Martin Luther King Jr. delivered during the March on Washington for Jobs and Freedom. The shame of traditional African practices is not ours. Trauma is kept in the body, shake it off.” – Shaina Simmons