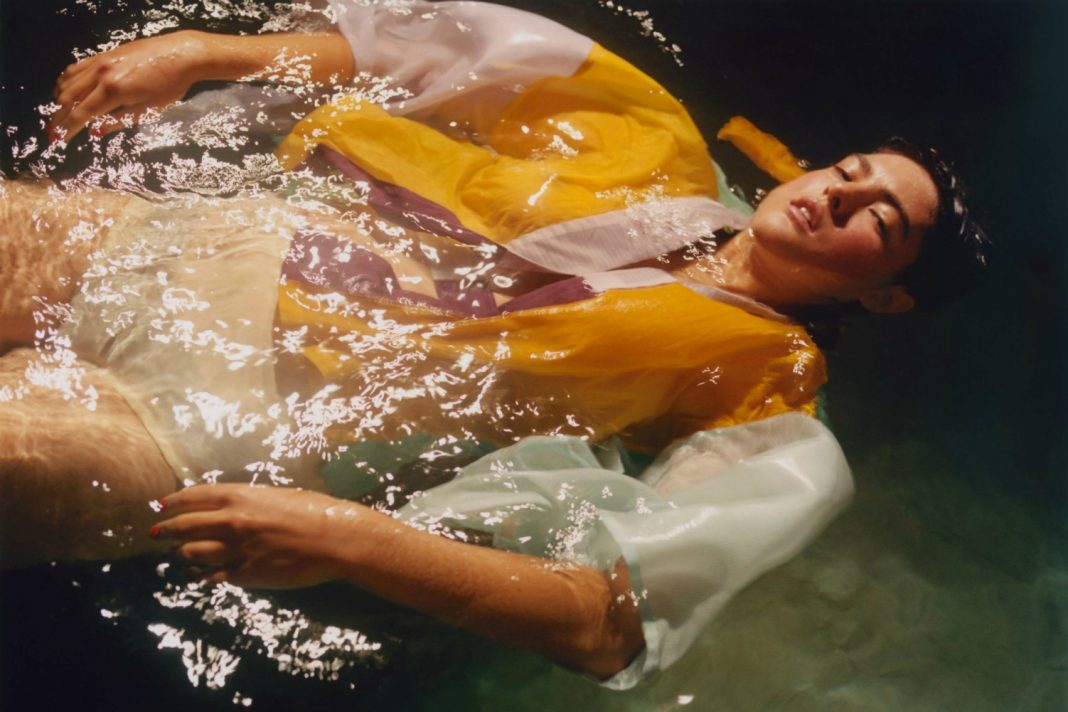 The way Miya Folick sees it, there’s nothing wrong with being a little all over the place. A classically trained vocalist who switched to pop music after picking up guitar in college, the L.A. singer-songwriter’s sonic desires have always pulled her in a thousand directions at once. “People want you to be one thing and just keep doing that one thing,” she says. “I don’t do that very well.”

The 28-year-old artist kept this ethos in mind while working on her new album, Premonitions. Bouncing between lyrical ballads and punchy, high-voltage pop songs, the debut effort takes on tough subjects like abuse and corruption with surprising intimacy, blurring the boundaries between the personal and political and defying categorization as deftly as the artist herself. We sat down with with Folick ahead of her national tour to find out how it all came together.

You grew up in Santa Ana. What were your early musical experiences like?

I studied classical voice. I was completely isolated from the band music scene in Orange County, though since leaving I’ve heard it’s really good. I learned a bunch of Italian, German, and French arias. At that time I was just focused on singing correctly, not being super expressive. I was kind of obsessed with opera. I made my mom and dad to drive me to downtown L.A. to go to Classical Singers Association master classes, so I could see opera singers sing and talk about how they were doing everything. But I knew I knew I didn’t have the right kind of voice for that. I also didn’t particularly like operas as productions; I found them really boring and they’re always, like, weirdly sexist and homophobic and racist.

How did your vocal style shift when you started playing pop?

When I started performing live, I realized how much fun it is to sing into a microphone—there are so many different sounds you can make using the microphone as a tool. I was like, I want to be loud, I want it to be a little bit abrasive, I want to shake people up. I figured out there are all these pockets of my voice that I didn’t even know were possible. I never thought I could scream. My old voice teachers would be horrified to see how I sing now, but I do think I have the background to be able to sustain my voice on tour because of that [early training].

I think singing is underrated as an instrument in pop music. Most people don’t really know how to sing, which is fine—when you use your voice expressively, that’s all I really care about. It’s just interesting that people say I’m a self-taught musician, just because I taught myself how to play guitar. I’m not, I’m a trained musician. I’ve been studying voice since I was like nine, but nobody thinks of the voice as an instrument.

Your music often has political undertones. Some of the songs on Premonitions—like “Thingamajig” or “Deadbody”—sound like they could apply to either a personal relationship or a political struggle. Was this intentional?

Yeah. I wrote most of the songs with the producer, Justin. A lot of them secretly aren’t about a relationship, but I use the word “you” in it. Using a singular pronoun even though it’s actually about a lot of things makes it easier to relate to as a listener. I feel like politics has (obviously) created this weird divide, and the personal is so political right now. Making songs that are just about romantic relationships is boring to me—I love love songs, and I love listening to other people’s love songs, but I need a broader perspective in order to keep myself engaged. I think music can help remind people that we’re just talking about humans. If I’m ever political, that’s basically what I’m saying. I don’t like “fuck you” songs, I don’t like “I hate you” songs, but I do like songs that are like “Hey remember that this life is a gift, and we’re all just people.”

I think music can help remind people that we’re just talking about humans.

This record is more diverse stylistically than your 2015 EP Strange Darling. How did you keep it feeling cohesive?

When I was thinking about this record, I was listening to Bjork’s Post a lot. I was like, this is what I want to do—it’s everything all at once. You never think, “Well I don’t really know who Bjork is.” You don’t care, because every song is good. I think working with the same production team on the entire album helped make it cohesive. A lot of singer-songwriters and pop musicians right now are working with different producers on every song, which I think is cool. But for this kind of album, it was important that we kept it all in the family, since it kind of went everywhere. I find it really fun, and it makes for a very, very dynamic live show—you don’t really know what’s going to come next.

Aside from Bjork, who are some of your other musical influences?

I really am not a big listener of music. I go through phases where I’m like, OK, I gotta do my research, just because I feel like it’s good to be educated about your industry. I really like the Cocteau Twins and Joni Mitchell. I love Sharon Van Etten. I really like Phoebe Bridgers’ new album. I love Big Thief’s new album. I listen to a lot of Brian Eno, and ambient stuff. I like to run to Gustaffelstein because it’s intense. I like Oneohtrix Point Never. I listen to Broadcast a lot—I actually have a Broadcast tattoo.

But the way that I’m inspired by music is very subconscious. I don’t directly reference anything, but if I hear something I like, I soak up like a sponge. I see myself emulating things later that I don’t really listen to that much. I think I just like quiet—It’s never silent in my apartment. I live downtown, it’s really loud, everything’s buzzing. I just like to hear nothing.

RELATED: Joni Mitchell Is Turning 75, but Her Influence on Music Is Timeless