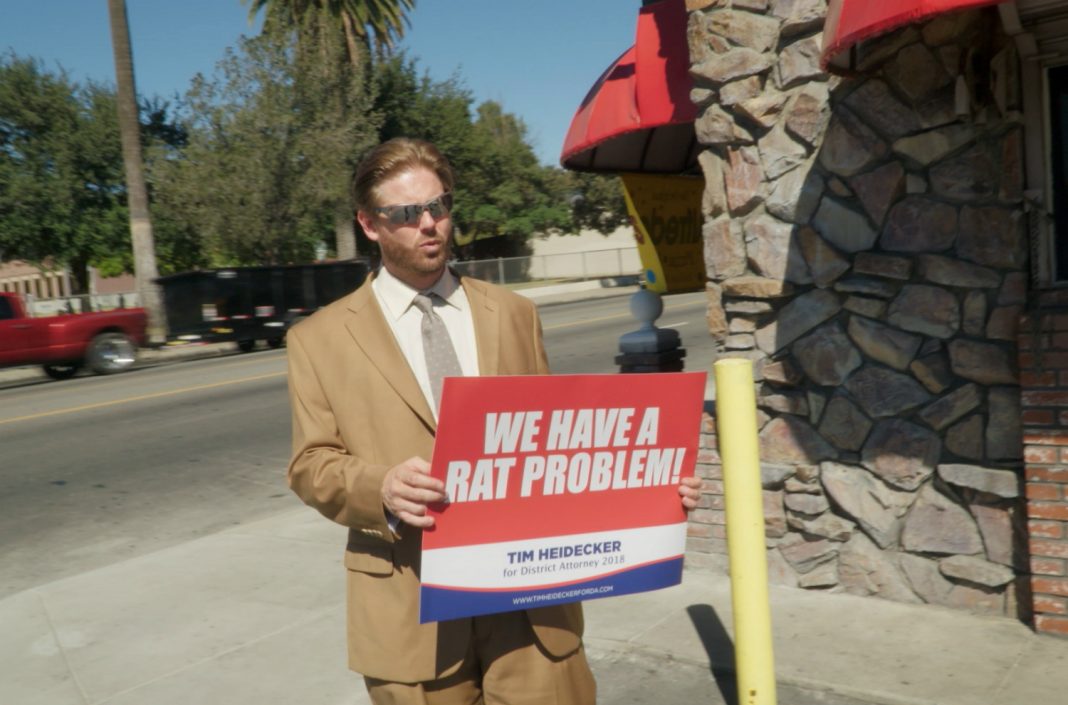 On Cinema at the Cinema is a hard thing to describe to the uninitiated. What began as a podcast has morphed into a multimedia comedy franchise that rivals the Marvel Cinematic Universe in scope. (Its insane journey can be traced on the website Oncinematimeline.com.)

Its most recent spinoff is the feature-length film, Mister America, which makes its world premiere at Beyond Fest tonight (sold out; sorry) before opening wide on October 9 and running for a week at Alamo Drafthouse in downtown L.A.

At the heart of On Cinema is the relationship between Tim Heidecker and Gregg Turkington (the actors use their real names to play fictional versions of themselves). Like hellishly petty versions of Siskel and Ebert, Tim and Gregg meet regularly to discuss and rate the latest movie releases (from zero to five bags of popcorn). The setup is a pretense for the two men to engage in vicious battles of egos, resulting in some of the best comedic content on the internet.

As the show progressed alongside the rise of Donald Trump, the comedy began to take a political turn, with Tim Heidecker (the character) becoming a right wing blowhard focused on Free Speech, American Values, and the horror of liberal conspiracies such as vaccinations and the New World Order.

Mister America—in which Tim, weeks after being exonerated on a technicality for the faulty vape pen-induced deaths of 19 teenagers, decides to run for San Bernardino District Attorney—is their most political foray so far. As well as being a comedy about what happens when a right-wing blowhard is confronted with the realities of the political process, the film is also a cautionary tale of what happens when an energetic idiot is coopted into spreading hate.

We talked to Tim, Gregg, and director Eric Notornicola about the process behind the making of Mister America.

Can you talk a little bit about how Mister America was made?

Eric Nortornicola: Early on we figured out that shooting on the street with real people not only gives you some of the best performances, but real people are going to act like better real people than any actor ever could. So we thought, why not just take Tim out onto the street and present him as if he’s actually running for district attorney and get honest reactions from people.

Tim Heidecker: There was like something coincidentally nice about the fact that my campaign was such a shoestring, lonely, isolating experience that you didn’t need a lot of other people around.

E.N.: Some mockumentaries can end up feeling staged or inauthentic. We decided to shoot a lot of these scenes and cover them as if it was a real documentary, which means not allowing the camera operators to go and pause everything and get a better shot.

How much of it was improvised?

T.H.: It’s a weird word because we have a very clear sense about what we want to get out of that scene. But generally, it’s just like, set the conditions, understand what we want to try to get and then just improvise.

Gregg Turkington: There are lines in the script, but I don’t feel like we’re reading those lines before we shoot the scene. They’re basically forgotten.

E.N.: If you’re talking about the words used then I would describe it as almost entirely improvised. We will read a script that serves as an outline. But these guys know their characters so well, but they’re able to improvise as them and the other the other actors have been given outlines as far as what their characters were thinking. So they’re also improvising a lot of that.

How did you develop the character of Tim’s campaign manager, Terri?

T.H.: Greg had a great guide note for casting, which was when you’re watching CNN and the women that they interview in the diner who still support Trump. And they’re quick to anger, quick to be self righteous and sort of bitter, but they also look sort of suburban, baby-boomer type. That kind of person was such a new vibe that we hadn’t explored yet.

G.T.: She was so real. The way she constantly digressed down random rabbit-holes, she was just like family members that we all know.

What attracted you to exploring the world of San Bernardino County?

G.T.: It’s funny, because a lot of these decisions come out of people’s mouths during an episode of On Cinema and then they get locked in.

T.H.: But that’s the genius of Greg, because if you understand the geography of California, you realize that it’s just not where you want to be if you have any aspirations in Hollywood, or if you consider yourself in like in the epicenter of the movie business. San Bernardino is a great foil for this world because it has this huge Latino population and me coming in talking about “bringing things back to the way they were” just it shows my ignorance.

E.N.: It’s a place full of very real people that are have no patience for these two oafs that have no business running for anything in San Bernardino. They don’t live there.

G.T.: Also I think geographically it’s the biggest county in the United States. So the idea that you think you can just walk in there is funny—it’s a big fucking place.

The tone of the film can get very dark, with Tim’s descent into political madness becoming almost tragic. Was that tone something you worked toward from the beginning or did it grow naturally through shooting?

E.N.: I think the tone of the movie reflects our feelings about the world of politics. More generally just a way to exercise our own demons and a way to comment about the frustrations we have. I think that a lot of that comes through in Tim’s character.

T.H.: I mean, we started this before Trump became president but he was certainly a political animal that we were well aware of. And my character has always been this white guy that feels victimized, that all these liberals are ruining the great things we had. But also he’s a rube who picks up on whatever trend is around: he’s getting into motorcycles, he’s getting into vaping, he’s getting into EDM.

T.H.: So we made a decision once Trump really became [the candidate] for president. We were like, well, of course, this is the guy that would vote for him. So the character became a Trump supporter. He became like a racist who doesn’t think he’s a racist and all those bad things. In this movie, we dip into that a little more. We felt that this was a good opportunity to talk the way we see some of these rats talking on TV. All this kind of coded, dog-whistlely-type language.

You have done test screenings for non-On Cinema fans. How did that work out?

E.N.: I think the experience is enriched by having a knowledge of On Cinema, but it’s certainly not necessary.

T.H.: The other thing I worry about is like we spent eight years on On Cinema making fun of film criticism. And maybe these reviewers are like, sharpening their knives saying, “Oh you think your so funny, wait till we get this movie… zero bags of popcorn!” (Eric and Gregg laugh)

E.N.: Yeah, but we hope that it’s accessible enough for most people. And also, at the same time we don’t like holding people’s hands too much and we trust that they can take the comedy that Tim and Gregg make.

G.T.: Yeah, we’re never winking in the movie, that’s for sure.

T.H.: And also we’re running in at odds with almost every other kind of comedy, because most comedies are made to make you feel good about the character. Feel that you like these people and are rooting for them.

G.T.: People that like our type of comedy, I think have found their movie. Tim’s character and the way he’s portrayed, people know these kind of people and they’re going to just sit there hating him and being reminded of people in their life.

What’s next for On Cinema?

E.N.: I still wanna do that Dekkar Rock doc. [Dekkar is Tim’s fictional rock band.] We’re always looking for different mediums to put these characters into, and it’s whether it’s the book or the live show or the TV series.

T.H.: But you know, we’ll see how this movie does. Because we have a very efficient formula for making stuff. It doesn’t cost a lot of money, we can do it very quickly. And with the right idea, you can just say, well, we’ll give you another movie next year and we don’t know what it will be yet, but it will be something. A good movie theater experience.