Home L.A. History A Beloved SoCal Drive-In Gets an Encore Thanks to the Pandemic 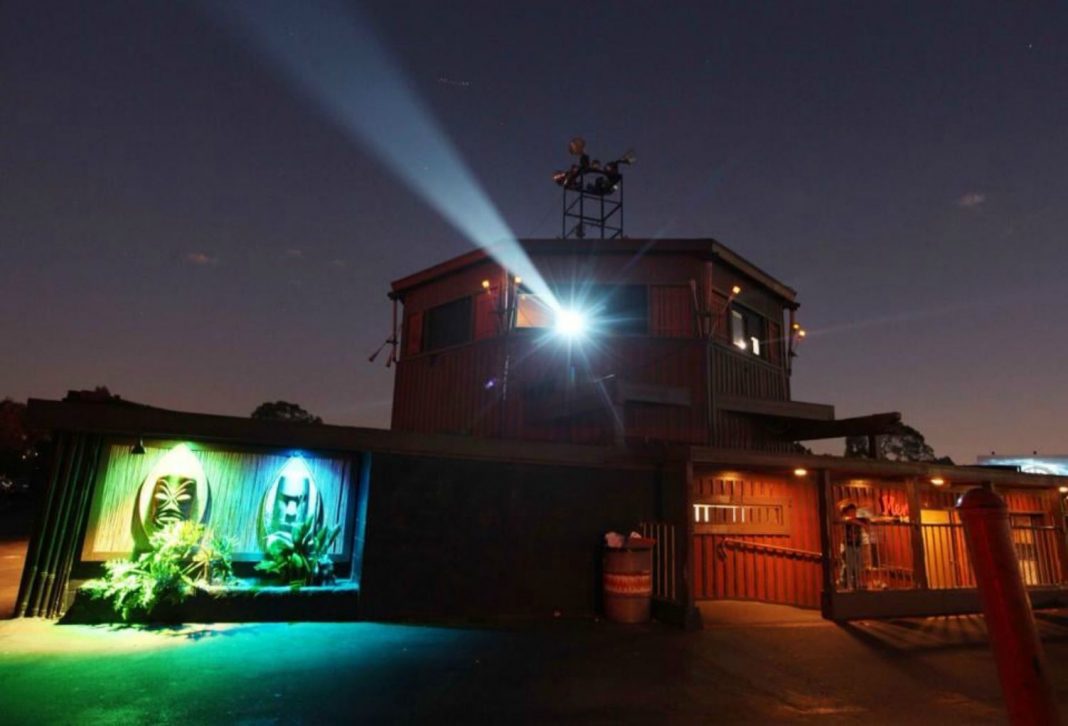 The Mission Tiki Drive-In Theater in Montclair has been showing movies outdoors since 1956. This year, the venue has seen a huge uptick in business as moviegoers hungry to see films in a theater flocked to the outdoor venue 35 miles east of Los Angeles. The 27-acre property was sold for development last year, but uncertain times have staved off the final curtain for a bit longer. We spoke with 73-year-old Frank Huttinger, CEO of DeAnza Land and Leisure, which has owned and operated drive-in theaters around Los Angeles for more than 70 years.

We had a very good summer and we had to figure out what to do in the fall. We didn’t have much to play outside of a couple movies from the major studios, so we blended independent films with repertory during the summer, and after school started, repertory didn’t work anymore so we looked for more from independents.

Your programming has been much more interesting lately.

We did four simulcast concerts, from country to heavy metal. We’ve been doing premieres of studio movies with cast and crew. We had the only Southern California engagements for The Last Vermeer and the Korean film Minari, and we ran films from Amazon and A24 that are not typical drive-in fare. I was the first one to put Goonies and Gremlins together and it knocked it out of the park. After that every drive-in in the country did it. You’ve got to pair pictures that have copacetic content.

Were you always in film exhibition?

I grew up in Philadelphia and went to the Philadelphia School of Art and Yale. I shot a bunch of student films and came out here in the 1970s. I was a director of photography and a cinematographer at the American Film Institute. I shot mostly commercials and industrial films. I worked with Charles and Ray Eames and made films for IBM and Polaroid. We were working on an updated Powers of 10 and a sequel to Toccata For Toy Trains when Charles died and I moved on. This is my fourth career, I’m 73 years old. I’ve been around the horn.

How did you end up at the drive-in theater?

My father in-law started the company in 1947. About 15 years ago I thought there was an opportunity to fix up these drive-ins. I headed up a remodel and rebranding, we upgraded the projection and sound and I started booking films. When he retired the board asked me to run the company and I’ve been CEO since 2012.

What’s the history of the Mission Tiki?

We bought the property in 1956 and ran it as a single-screen theater and multiplexed it into four screens in the 1970s. It was a big, 1,200-car venue that we converted into a 2,000-car, four-screen cinema. It has been in our company since it was built. We also rented the Valley Drive-In down the street and promoted them together. We ran the Gilmore Drive-In in Los Angeles, where the Grove is today, and the Victory Drive-In in Van Nuys, which we converted into a shopping center back in the ’80s. The company was created to invest in land that would eventually be redeveloped, that’s why we’re called DeAnza Land and Leisure.

How was this year different at the theater?

We did very well. It’s kind of a mixed blessing, but Mission Tiki has expanded its audience base and done well during COVID. Our theaters have always been a neighborhood place, but now people are coming from a great distance. The American Cinematheque’s Beyond Fest was one of our highlights and introduced a whole lot of people from the western part of L.A. to the drive-in who have all been very appreciative.

With everything going so well, why close down?

It’s public knowledge that we sold the land for development. Let’s just say land values have appreciated substantially and the money we will receive for the property will exceed ten years profit all at once. We can reinvest that money in more profitable businesses. It’s disappointing but I’m not going to make a long bet on drive-in theaters. Motion picture exhibition is going to continue to be highly impacted by streaming, and premium video-on-demand, and whatever the cable channels put out. You can buy a five-foot TV for $500 now. COVID has impacted AMC and Regal so severely and the smaller circuits are not going to survive for the most part. We still have the Van Buren and the Rubidoux in Riverside County, but those are a schlep.

The developer is not planning to break ground here until sometime in 2021 so I’m still working with the Cinematheque and with the Sundance Film Festival. We’re opening Wonder Woman and Tom Hanks in News of the World on Christmas Day and other showcase presentations. We have an open extension with the developer and I figure we’ll get 30 to 60 days’ notice. I have a lot of fun working with the studios and creating a very appreciative audience and we will continue to operate until it is time to go away.

RELATED: Movie Theaters Are Still Closed, but These Drive-Ins Are Open for Business