Home Film 50 Years After Midnight Cowboy, Gay Cinema Is Still a Work in... 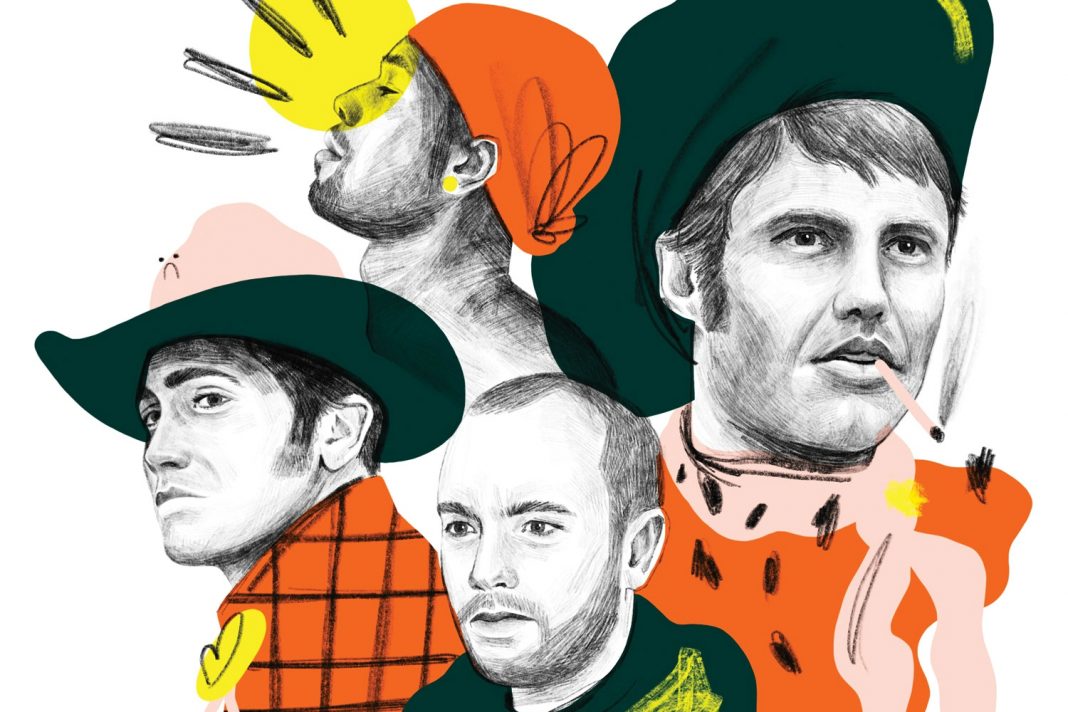 History has a hell of a sense of synchronicity. The 50th anniversary of the Stonewall Inn riots in New York City’s West Village is also, give or take a few weeks, the 50th anniversary of Midnight Cowboy, the story of Manhattan hustler Joe Buck and Times Square con man Ratso Rizzo, portrayed respectively by Jon Voight and Dustin Hoffman. Theirs is a platonic love that, in the late spring and early summer of 1969, was only beginning to speak its name, in murmurs barely more audible than sign language. When it opened, truth be told, Midnight Cowboy was identified as a “gay film” per se by only a few, including the picture’s middle-aged, closeted British director, John Schlesinger, who went on to win the Academy Award for best director. Rated X, the movie was the first winner of a Best Picture Oscar that had even a subtext of homoeroticism, and if it didn’t kick open the door for films with gay subject matter, it certainly got its foot into a doorway that would never be entirely closed again.

Beginning as a police raid on a gay bar before it escalated into full revolt, Stonewall became a celebration as much as a protest, a pushback against not just homophobic cops but all the obstacles beyond which a few thousand years of so-called civilization compelled gay people to hide. Nothing was the same afterward, and that included the movies: Struggling with his own gay identity and liberated by having made Midnight Cowboy, Schlesinger followed with his more explicit Sunday Bloody Sunday, in which the director’s surrogate, a doctor played by Peter Finch, not only conducts an affair with another man but does so without the self-loathing crack-up that was customary, and maybe even obligatory, in such stories.

All this said—and I’m sure it will come as a great shock to you—over the course of the 1970s, the subsequent treatment of gay life in movies, from The Boys in the Band to Cruising, tended toward the seamy, sensational, and exploitative. This changed in the ’80s and ’90s with AIDS, because AIDS meant Hollywood could make movies that weren’t necessarily about being gay but about dying, a theme the Industry has typically found more glamorous since at least the ’30s (when Greta Garbo routinely succumbed to tuberculosis and hurled herself on train tracks). In the context of a larger drama about homophobic discrimination, the death of Tom Hanks’s crusading lawyer in Philadelphia wasn’t so much a gay demise as a heroic one that transcended gayness. That, of course, implied gayness was still something to be transcended. For some of the same reasons as those pertaining to AIDS dramas, Hollywood sometimes seemed even more accepting of trans stories like the Oscar-winning Boys Don’t Cry, based on the real-life Brandon Teena, who identified as a man and was savagely murdered for it in the American Midwest. In its own paradoxical fashion, this sort of movie may have lent itself more to the conventional conflicts and duck-out-of-water formulas in which Hollywood had always traded.

By the way, Hanks is straight, which also won’t come as a shock, as was Finch, an actor with a fairly notorious litany of women in his life. In case we have any delusions about Hollywood’s broad-mindedness on the topic, it’s useful to note that until recently, Hollywood didn’t mind gay heroes as long as they were portrayed by actors who not only were straight but whose sexuality the audience never had to suspend a lot of disbelief about. So the 1985 death from AIDS of Rock Hudson, who for more than three decades was very much the public’s idea of a man’s man, was a seismic event in its open revelation of what the movie business secretly had known for a long time—that even some of its most unassailable sexual exemplars, from Cary Grant, Clark Gable, and Marlene Dietrich to Marlon Brando, Montgomery Clift, and, yes, Garbo herself (on or off the train tracks), were a little more ambiguous than was tolerated by an American culture that never had use for ambiguity. Even 2005’s “gay cowboy” cause célèbre, Brokeback Mountain, offered viewers two lead actors who any looped-in audience that had seen Entertainment Tonight could rest assured were off to bed with Heather Graham and Kirsten Dunst once director Ang Lee called, “Cut!”

In the interest of full disclosure, I should add that straight writers opining about Brokeback Mountain in magazine columns weren’t immune to confusion. Grappling fitfully in these pages with why Brokeback Mountain failed for me, especially when compared to Annie Proulx’s terse and less romanticized short story from which the film was adapted, I had to accept the possibility that the fault lay not in stars Heath Ledger and Jake Gyllenhaal but in myself, and all these years later—notwithstanding sterling performances and Ledger’s heartbreaking “I can’t quit you” moment—the most indelible memory I have of the movie is costar (and soon to be Ledger paramour) Michelle Williams’s shocked-to-her-soul discovery of her husband’s forbidden love affair. Meanwhile, as straight actors garnered acclaim for gay roles, chatter about Rupert Everett playing James Bond evaporated once Everett came out. Afterward, he was increasingly consigned to roles either homosexual or nonsexual. When it comes to disbelief’s suspension, in other words, it remains to be seen whether a gay actor playing a straight romantic role is just a bridge too far for some audiences. Whether this is homophobia or due to some psychosexual wiring too profound to overcome in terms of how we perceive and process hardwired notions of sexual attraction is beyond the limits of my meager understanding. And whether Brokeback Mountain’s acclaim was less for the film’s merits than for its audacity in dealing with homosexuality on its own terms probably misses the point. Sometimes there’s no separating a movie from what it represents when what’s represented is a vision and voice that millions of people have been waiting to hear—and that millions of others needed to hear but didn’t know it. 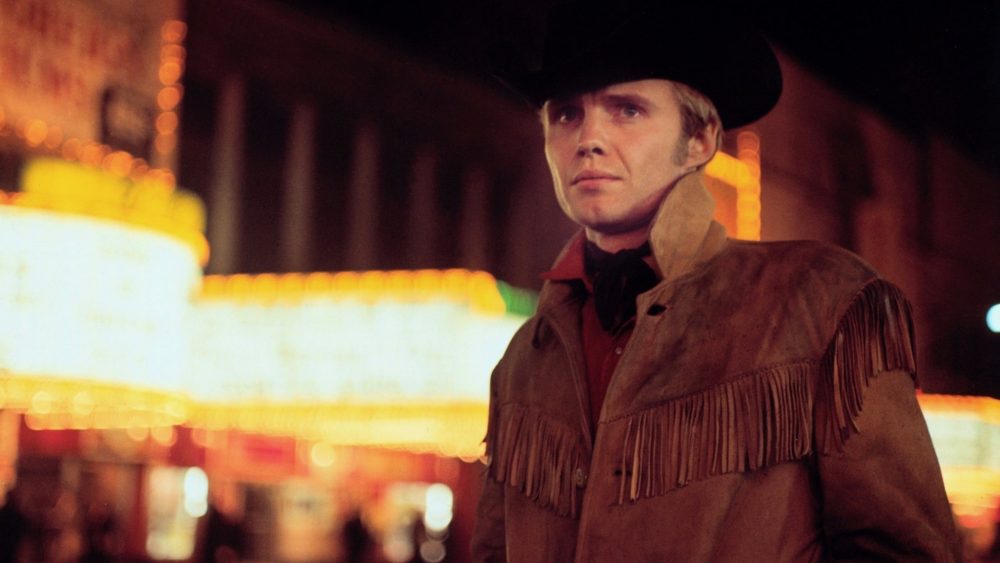 By the same token, it may not make much difference that Midnight Cowboy hasn’t aged well. If today its fractured imagistic vocabulary seems smug and superior in that ’60s way that is at once so full of itself and so quaint, and if not all the artifacts of the ’60s have survived the clichés they created, what endures is the decade’s sense of possibility, socially and aesthetically. The two generations since Midnight Cowboy feel both endless and as if they’ve passed in the blink of an eye, gaining velocity along the way, and the 14 years since Brokeback Mountain have brought with them Call Me by Your Name, Bohemian Rhapsody, Milk, Dallas Buyers Club, A Single Man, Carol, Blue Is the Warmest Color, Tangerine, and, most particularly, 2016’s Moonlight, which was a landmark on so many levels as to elude reductive gay-movie characterizations altogether. This is a testament to how the rest of us have been made to confront the fact that gay people are in our families and among our friends, and the measure of that realization doesn’t even take into account—so we will here—that a half century after the gay patrons of the Stonewall decided they’d had enough, a gay Midwest mayor has emerged as the most inspiring presidential contender in what’s otherwise the most toxic national moment in memory. Four weeks before Stonewall, and regardless of whatever did or didn’t happen intimately between Joe Buck and Ratso Rizzo on Midnight Cowboy’s long final bus ride to oblivion, their love story remains one for the ages, and those ages include our own.

RELATED: 100-Plus LGBTQ Icons Who Are Shaping Culture in Los Angeles and Beyond