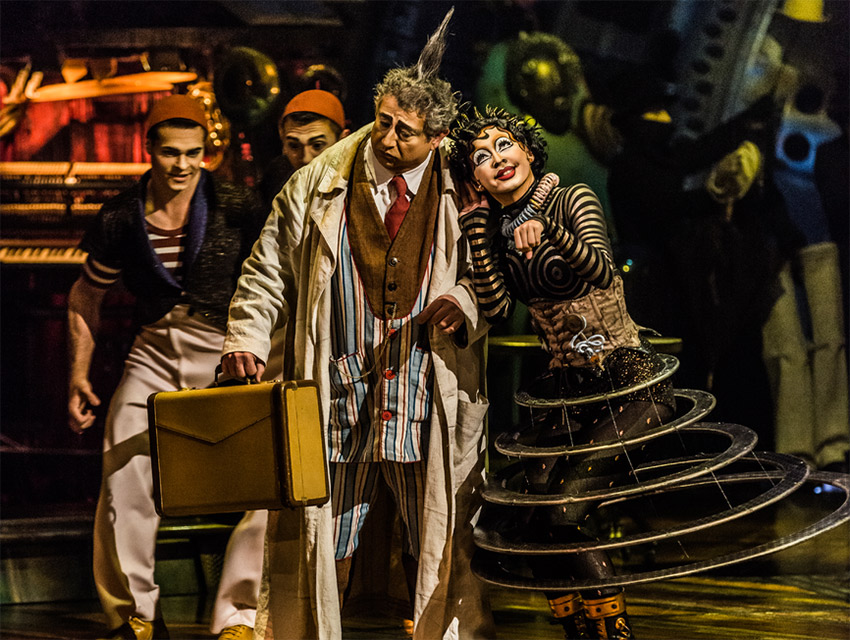 The music from an early Cirque du Soleil show was what first captured the imagination of Michel Laprise. Before Cirque became an international brand, one with lots and lots of security, he was able to sneak up to the chapiteau (as they call their tent), following the music the way children followed The Pied Piper. He parted the canvas and couldn’t believe his eyes. It’s that same sense of wonder he hoped to bring to Kurios: Cabinet of Curiosities, the latest traveling Cirque show. Laprise both wrote and directed the spectacle which opens next week in the parking lot at Dodger Stadium.

“I never knew that was possible,” he says regarding his first viewing of Cirque. “I started to cry. I was raised in the city where everybody was white, Catholic, middle class and conformist. To see a diversity of colors, sounds, ways to behave—that diversity was welcomed. To me it saved my life in some ways. I was a troubled kid.” Laprise loved the show so much that he and his father want back to see it again the next day. “For Kurios I wanted to recreate that feeling I had when I was a kid.”

Pulling such a thing off meant shaking things up. “There are a lot of things I wanted to change, and I did,” he says. “Because of the shape of the chapiteau, you always have the stage and something in the middle. But I wanted to bring bigger scenes on the stage. Other shows have a turntable with traps in the floor. I didn’t want those. I challenged the whole acrobatic team not to have traditional apparatus. I didn’t want a teeterboard, no trampoline, no contortion table. For aerial, I wanted a bicycle instead of a hoop because as a child, a bike was the first thing that gave me freedom of movement and it is a democratic way of transportation. Each of them was a crusade. I’m glad we did it.”

As with each Cirque show, Kurios has a story. “I imagined someone who traveled the world and assembled these curiosities,” he explains. “He can travel into the other dimension of the visible/invisible. This man will travel into dimensions and bring the dreams back on the stage.”

French filmmaker and special effects pioneer George Melies, who inspired Brian Selznick’s book The Invention of Hugo Cabret and Martin Scorsese’s subsequent film Hugo, also inspired the look of Kurios. “He was a magician,” Laprise says. “He was one of the first guys who said with cinema, ‘We can record reality, but why record reality when we can play with that tool and create something more whimsical?’ The aesthetic of Paris 1900 is something that I like in the show. It was a beautiful era for aesthetic and for metal.”

It was Laprise’s childlike wonder that led him to Cirque, but he still manages to stay curious as an adult. “Curiosity makes you create bridges with what you don’t understand,” he says. “I like things that I don’t understand. We have to remind ourselves that we have to be in relationships with people we don’t understand. This will always guide me. I will still be curious when I’m 100 years old.”