Home Books Michael J. Fox Is Still in the Business of Telling Stories 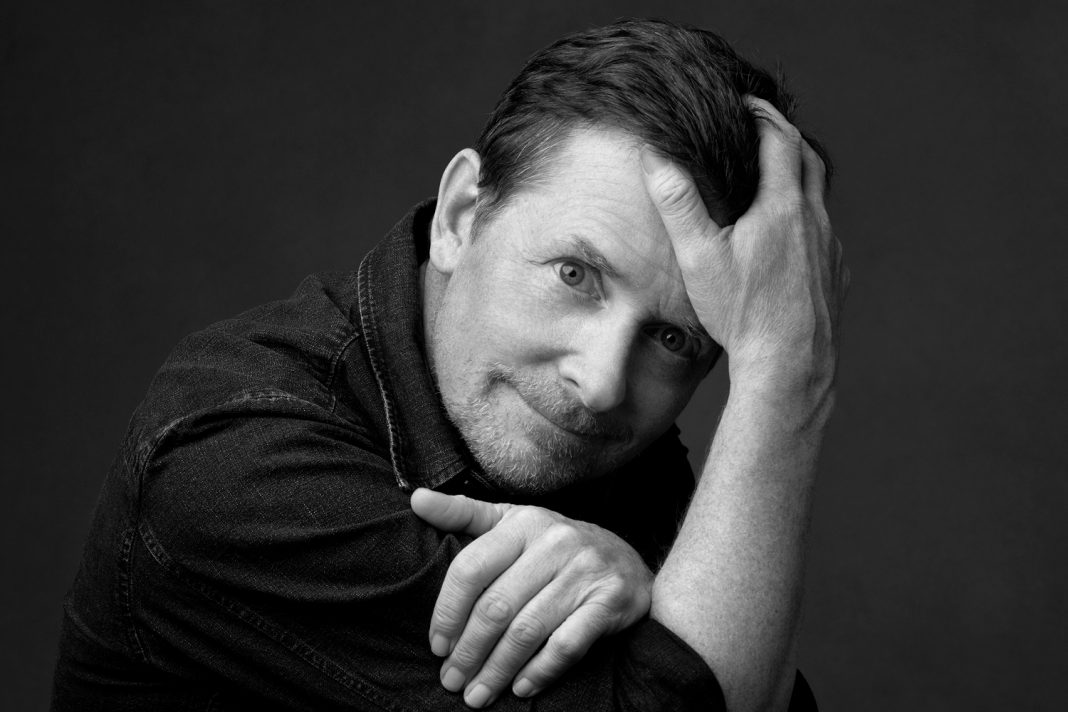 One early morning in the summer of 2018, on Manhattan’s Upper East Side, Michael J. Fox found himself writhing in agony on his kitchen floor. A hard fall had shattered his arm. It did no good to scream for help; his wife of 32 years, actress Tracy Pollan, who had picked him up from so many falls in the past, was 300 miles away, in Martha’s Vineyard. In this lowest of moments, while trying to drag himself, commando-style, with his one good arm, to the phone across the room, he decided he might at last be out of the making-lemons-into-lemonade business.

“I had no optimistic happy talk for this, no “Cheer up, Mike” thing I could give myself. I had nothing but regret and shame,” he tells me on a recent afternoon in his office, for the latest episode of Los Angeles’s podcast, The Originals. “I thought about how I’ve been trying to sell optimism as a panacea, how I was really glib about it. And here I am with a broken arm, and I just feel like shit.”

His arm is healed and he’s in good spirits and walking on his own again, but the admission is nonetheless dispiriting, a bit like hearing Mr. Rogers declare that, on second thought, he’s decided we’re not all so special after all.

In the 30 years since learning, at 29, that a persistent twitching pinky was a symptom of early-onset Parkinson’s disease, at every turn, Fox has been an inspirational figure, the kind of person who, despite his personal discomfort with maudlin displays of admiration, tends to bring audiences to their feet whenever he appears publicly. Parkinson’s patients look to him as an exemplar of glass-half-fullness. “Commodifying hope,” is what he labeled his personal brand of optimism. And, as laid out with humor and unflinching honesty in three best-selling memoirs—his latest, No Time Like the Future: An Optimist Considers Mortality, is out November 17—this optimism allowed him to achieve far more than he did in his prior life as the healthy A-list star of the Back to the Future trilogy.

He saved his marriage by quitting drinking; added three daughters to his brood and a fifth Emmy to his collection for his guest arc on Rescue Me; starred in The Michael J. Fox Show, an NBC sitcom that made light of his health travails; and started a his eponymous foundation that has raised nearly a billion dollars for Parkinson’s research—all while getting progressively sicker. His life, he declared, was exponentially better after his diagnosis than it had been before. Somehow, an incurable, degenerative disease brought Fox the kind of clarity, mindfulness, and appreciation for living in the moment that those of us who are healthy spend our entire lives chasing, mostly in vain.

“It was one of the great ironies of my life that only when it became virtually impossible for me to keep my body from moving would I find the peace, security, and spiritual strength to stand in one place,” he once noted. “I couldn’t be still until could—literally—no longer keep still.”

Fox became a young wise man; his friends began jokingly referring to him as “Gandhi.” Recently, some wits on Twitter took perverse delight in Rush Limbaugh’s tearful announcement that he was dying of cancer, given that, in 2006, he’d heartlessly accused Fox of faking his Parkinson’s symptoms for a pro-stem-cell political ad. Fox refuses to join in on the fun. “I believe in karma to an extent,” he says. “I look at it as: a seed planted will be a tree that grows. Then you’ve got a tree full of apples. I like that karma.”

Fox’s particular Zen armor came under assault that morning in 2018, when, as he writes, the fates served him up a “shit salad.” Doctors had previously discovered a tumor on his spine that, left untreated, would paralyze him. After months spent recuperating from surgery, he took that hard fall in his kitchen, splintering his humerus from shoulder to elbow, necessitating surgery and 19 screws to fasten a steel plate onto his shattered bone. The accident left him immobile, in a deep depression, heaping recriminations on himself for what he perceived as the carelessness that affected everyone in his life, most notably Pollan, whose patience with him he describes as “Thank you, sir! May I have another?”

“I blamed myself because I did it,” he says. “Parkinson’s, I didn’t do. The tumor, I didn’t do. I was yelling at myself. I was so angry. I felt like I let everybody down. It was the worst I’d felt since the early days of Parkinson’s on Spin City, when I would beat my arm up because it wouldn’t stop [moving involuntarily] when it was time for me to do my scene in front of the audience.”

By Fox’s own admission, his health sucks and will only suck more. The parkinsonian symptoms—the resting tremors, the poverty of movement, called bradykinesia, have become progressively more pronounced. He’s totally lost his sense of taste, and speaking has become more difficult. He apologizes for his speech being a bit slurred, like he’s fallen off the wagon and had a few. Owing to balance issues, golf, which he took up post-diagnosis and looked forward to on annual trips with his close friends George Stephanopoulos and writer Harlan Coben, has become nearly impossible.

As for acting, Fox says, “I think I’m done working.” He says he can no longer in good conscience expect shows to schedule around his symptoms. Speaking and remembering lines have become an issue. He bids adieu to these twin passions with trademark equanimity. “Like Tracy said after we sold our house in the country, the one the kids had grown up in: ‘This house owes us nothing,’” he writes. “I feel the same way about my second act, and golf, too, for that matter. They both took me further than I expected, to places I may never visit again.” And as words increasingly elude him, he’s grappling with the fact that in addition to near physical paralysis, he’ll possibly experience memory loss, dementia, and paranoid delusions.

So, naturally, who would blame Fox if he decided to turn over his happy-talk megaphone to someone with a slightly less dire prognosis? In 1998, while still hiding his diagnosis from the public and his Spin City colleagues, he underwent a thalamotomy, surgery to kill the section of his brain that caused his primary Parkinson’s symptom, a pronounced left side tremor. Two weeks after surgery, the tremor was totally gone. But it was immediately replaced by a brand-new tremor on his right side. The progressive disease did what it had to do—progress—and so did Fox. He did all he could do, which, as he once put it, was “just show up and do the best that I could with whatever lay in front of me.” The best he can do right now is sharing the thoughts of his still-agile mind in his books.

“If you’re a creative person, you need an outlet for your creativity,” Fox says. “I draw, but I can’t draw anymore. I play guitar, but I can’t play guitar as well anymore. I act, but I find limitations in that, limitations in my memorization of lines. But I can still tell a story. And maybe people get something out of it. And that’s not my business. It’s my business to just tell the story.”