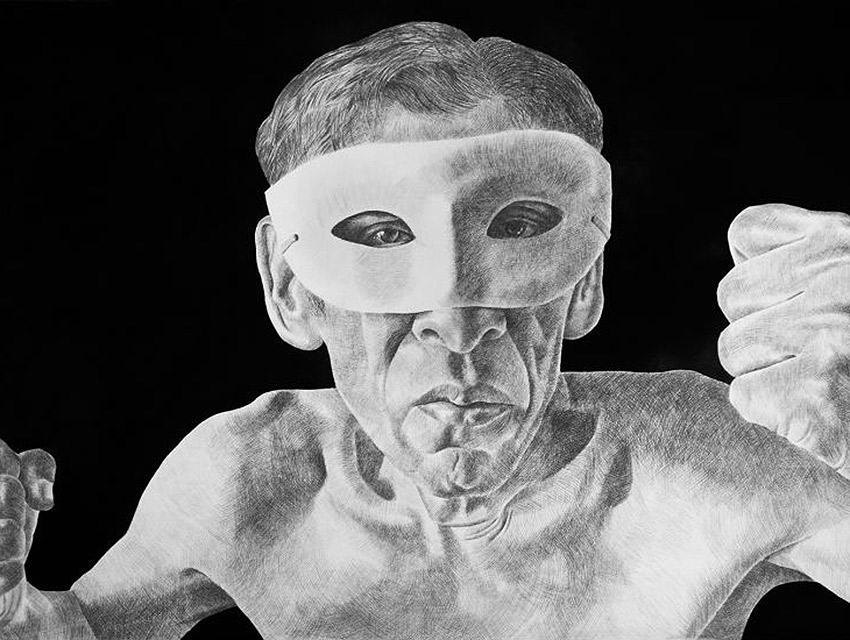 “Men front the hardest,” says artist Abel Alejandre, 46, as we look together at the drawings comprising Abandoned Superhero, his upcoming show at Coagula Curatorial. “Men are all bravado. But when nobody is watching, they are a bunch of softies.”

Alejandre, whose hyper-realistic drawings have been selected for installation in the Westwood-Rancho Park Metro Station, concentrates chiefly on depicting masculinity. “In this series, I’m making fun of men getting older,” he tells me, as we look at a portrait of a wiry, scowling, middle-aged figure—masked, shirtless and ready to rumble, holding up fists. “This guy probably weighs 120 pounds soaking wet. But he’s still gotta show that he’s got some fight in him.”

Alejandre came to the U.S. from Mexico as a seven-year-old child, moving from rural Michoacan to the Wilmington area; he still lives in Long Beach today. “We had no running water, no electricity, no washing machines, no refrigerators, no TVs,” he explains. “It was like moving from the 1600s to the twentieth century.” He didn’t find art until he was a teen, when a teacher put a paint brush in his hand in a high school art class. “I couldn’t believe it when they stood me in front of a canvas, that this was something you could do.”

One of his mentors, the artist Hugo Crosthwaite, told him, “You and I, we can draw. Not everybody can draw, so leave that other crap to the people who can’t draw.” His black-on-white cross-hatched technique requires exquisite precision and hours of labor: one as-yet unfinished piece, an enormous nude, five feet by seven feet, has already taken five-and-a-half months of work, 10 or 12 hours a day. Another drawing, titled Mis Nopales—a portrait of his father—required 700 pencils to complete.

To call his process intense is an understatement. Equally extraordinary is his pencil case—if one can call it that: it comprises hundreds of different types of pencils and 30 different pencil sharpeners. He says, with a chuckle, “I probably know more than is healthy about pencils!” His standing workstation, which he designed himself, rotates 360 degrees, so that his hand and wrist never come into contact with the work surface, and thus he never risks a smudge. While all this may sound like perfectionism, Alejandre asserts that “Art loves chance and chance loves art.”

Showing me the panels for the Metro station (which are projected to be revealed in early 2016), Alejandre explains that his motivation was to create as inclusive a project as possible. The 12 panels are drawings done from a child’s vantage point, looking at the legs, feet and hands of the other passengers. Slackers and commuters, students and families are represented here, with as many different ethnic and socioeconomic groups included as possible. Only the faces of two children are portrayed. “I didn’t want it to be overbearing,” he says of the diversity in the work. “But I also didn’t want to leave anyone out.” Since Alejandre’s work will be displayed near Culver City, he says he was inspired by the theatrical and movie studio history of the area, wanting to create a panoramic and cinematic feel in the panels.

That cinematic feel is echoed in the “Superhero” series, where Alejandre’s subjects wear capes and masks; he adds that he was inspired by comic book ideals. But these superheroes are not so super: one dejected subject (a portrait of the actor Alejandro Patino, who plays Cesar on TV show The Bridge) wears his mask on top of his cowboy hat, with his rumpled cape slumped around his shoulders, as if he can hardly bear the thought of facing one more day. “Most of my work deals with what it means to be a man,” Alejandre says. “And that means something different to everyone.”

Each drawing portrays a different friend or acquaintance of Alejandre’s; all of the men are portrayed in near-photo real detail. One of the men looks past the viewer, as if he’s seen it all before, and there’s nothing left to say. Another drawing depicts a caped man sitting calmly while a city burns behind him: “If he was a young guy,” says Alejandre, “he would go save it. But he’s too tired now. Now he’s just watching it burn.”

Abandoned Superhero is running until May 16 at Coagula Curatorial. Opening reception, April 18, 7 p.m.

Framed: Charles Bukowski, Alone and At Ease with His Vices