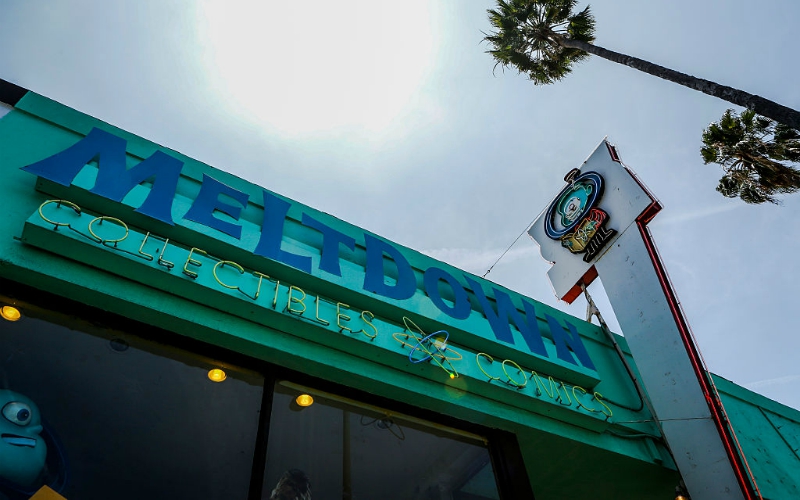 Another L.A. landmark bites the dust. After 25 years, Hollywood’s Meltdown Comics is closing its doors at the end of the month. Its backroom comedy theater, Nerdmelt Showroom, the birthplace of countless comedy shows including The Meltdown With Jonah and Kumail, will shutter as well.

In a letter published by Nerdist, which originated as a Chris Hardwick-hosted podcast recorded in Meltdown’s attic, owner-founder Gaston Dominguez-Letelier said, “No business is easy, least of all one rooted in paper surrounded by brick and mortar, yet against all odds we survived just long enough to host, share, and celebrate some of the most creative and imaginative artists in the world. It has been my personal privilege to welcome so many incredibly talented minds through our doors giving them and their work a home in this great city of ours.”

He added, “As I prepare to extinguish Sunset’s neon know that there is a new path for me (more later) and I close Meltdown without any regret. For 25 years I have been enriched by every inquisitive mind I have encountered on this journey and for that I humbly thank you, all of you.” The store’s website currently directs to a page where you can sign up to be notified via email “what the next 25 years will bring.”

People close to the store and its attendant theater immediately took to social media to mourn the loss:

.@MeltdownComics is closing shop in 10 days. Along with @NerdMelt Theater, it was a second home for many LA comics and comedy nerds. I was invited to start @melt_thology there, and to be part of a community of amazing people and performers. Thank you, Meltdown! #meltdownforever pic.twitter.com/7Zs7RZhWL3

I just heard the news that Meltdown Comics is closing down at the end of the month. I never considered myself a comic book guy – but for at least six years I considered this comic book store a second home of sorts. I made most of my friends there – and they made most of their friends there – it was like our Cheers. Gaston, the owner, gave SO MANY people a chance and a place. Every time I gave him a poster – he would mutter “punk rock duuuuude.” And I knew every bit of work was worth it. Here’s a poster from an eaaaarly Meltdown where Patton Oswald was doing an hour. I’m very thankful to live in a city with a place like this and to have been able to bask in its fluorescent cascade is an honor I won’t soon forget. Long Live Gaston. Long Live Meltdown. #meltdowncomics

It’s always been so much more than a store. Thank you Gaston. You gave us misfit toys a home. #RIPMeltdown pic.twitter.com/u3jiKZT3Dt

In the meantime, the store will be open until April 1 and, according to Twitter, everything is on sale for 50 percent off.

Nerdist School Is Rebranding as a Feminist, Inclusive Comedy Theater