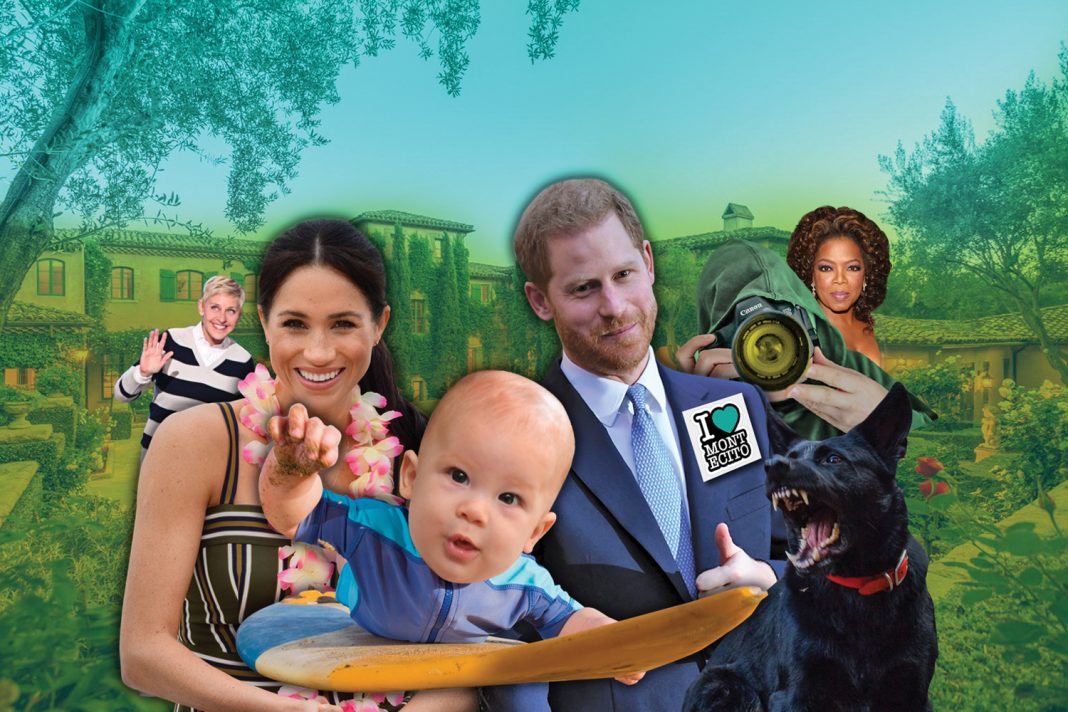 When Meghan Markle and Prince Harry moved with their son, Archie, into Tyler Perry’s Beverly Hills home this past summer, the paparazzi became such a royal pain that the couple sued to stop the onslaught of drones and helicopters flying over their home.

So in June, as the aerial assaults kept escalating, the privacy-seeking couple purchased a majestic 7.4-acre estate in Santa Barbara’s celebrity-strewn Montecito for a cool $14.65 million. Since then, the citizens of Montecito have rallied around the couple and vowed to protect them from further duress. In August, the local paper ran a story warning media interlopers that their shenanigans would not be tolerated. “Montecito Vows to Keep Tabloid Culture Across Pond,” blazed a front-page headline in the Montecito Journal. But while hacks digging for regal dirt usually leave empty-handed, public shaming hasn’t kept them entirely at bay. “The helicopters are still coming,” says one of the couple’s neighbors, who notes that swarms don’t last forever. “Listen, when Oprah bought her house here, the choppers buzzed for about two weeks and then never came back. After a while, they just get bored.”

Royals columnist Richard Mineards, who lives in the area, points out that Montecito is a haven for security-minded stars, including tabloid targets like Ellen DeGeneres. “Lately, we’ve had Ariana Grande, Natalie Portman, and Gwyneth Paltrow,” Mineards says. “We have George Lucas and Larry Ellison of Oracle—the fifth-richest man in America. So they’re in good company.”

The Sussexes’ new home, while far from the toniest in town, boasts a surplus of amenities. In addition to its nine bedrooms and 16 bathrooms, the Mediterranean-style manse features a library, a gym, wet and dry saunas, an arcade, a game room, and a home theater—plus a two-bed, two-bath guesthouse, a tea house, and a “children’s cottage.”

The pair purchased the property from a controversial Russian oligarch named Sergey “Scarface” Grishin, who admitted to stealing $60 billion from Russian banks as the Soviet Union was collapsing. Grishin went to great lengths to keep the deal quiet—even ordering an underling to get a real estate license so she could broker the transaction without involving nosy real estate agents.

While the recovering royals have not yet ventured out to local hot spots, they were recently observed pedaling around Montecito with a few minders. Mineards expects they will eventually turn up at VIP haunts like Lucky’s and Pierre Lafond—a French restaurant favored by Prince Andrew’s daughter Beatrice—and the Santa Barbara Polo Club, where Mineard’s friend Nacho Figueras, the Argentinian polo player, holds court. In the long run, he thinks Montecito will be a better fit for the pair than L.A. “It’s a wealthy enclave, international and very small. Nobody cares who you are. There are tons of famous people here and nobody gives them a second look!”

RELATED: Meghan Markle and Prince Harry Are Being Besieged by Drone Flybys