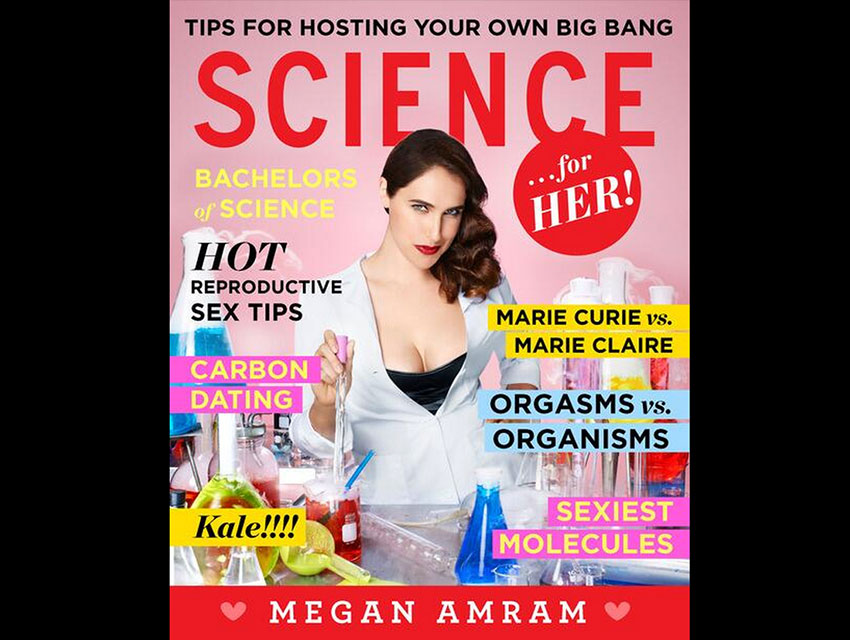 Equal parts Cosmo and Cosmos, Megan Amram’s new book, Science…For Her!, spoofs the inane banter in women’s magazines while skewering the broader culture. With stories like “Physics through Nail Art,” “Best Gravitational Fields for Losing Weight,” and “Fashion Staples for Each Step of Global Warming,” Amram lampoons the notion that women won’t engage with science (or rational thought) unless complex ideas are gussied up in frilly packaging.

An L.A.-based TV writer with a legion of Twitter followers, she reads like the demented love child of Sacha Baron Cohen and Amy Poehler. In her first book Amram, who has written for Parks and Recreation, has created an alter ego (also named Megan Amram), a semi-psychotic airhead who’s obsessed with her ex-boyfriend. Delusional, sexually frustrated, and narcissistic, the fictional Amram dives into sexism, racism, and other “isms” while remaining completely impervious to change. The result is a feminist comedy book that’s both delightfully dark and a perfect cure for a girls’-night-out hangover.

We caught up with Amram to ask about feminism, science, and, most importantly, the latest holiday trends.

Science…For Her! made me laugh hysterically but it was the most unattractive laugh you could imagine.
That’s all I want. I’m trying to sabotage you so I get all the boyfriends. I did think a lot about whether or not things [in the book] would be offensive. There’s a lot of edgy stuff in terms of abortion, assault, or any number of things that have a lot of bearing on women’s lives, which is why I included them. It would be almost irresponsible to not include any of these topics in a feminist comedy book. My alter-ego is pretty sexist, racist, and homophobic, and there are a lot of terrible things about her, but I think it’s pretty clear that I am making fun of people who are actually sexist, racist, or homophobic.

Do you have a background in science?
I’ve always been really into math and science. At Harvard I studied psychology—the softest of the sciences!—but I wish I’d chosen neurobiology. I wanted to write a comedy book with an aesthetic to it, and I thought it would be fun to create a satire of women’s magazines, or just sexism in general, and pull the jokes out as far out as I could go. It became a science textbook that teaches women that they don’t know anything about their bodies or the world.

What was the most fashionable disaster of 2014?
Ebola because it makes you lose so much weight. Any disaster that’s main side effect is weight loss­­ is so fashionable. You want to get in on the trend before it happens to everyone, so it’s nice that not everyone in America can get it. It’s exclusive.

How would you accessorize Ebola?
A Diane von Fursternberg wrap dress because you’re going to be so thin; those dresses only work when you’re basically skin-and-bones. I think that monotones and darker colors [accentuate] bloodshot eyes so make sure it doesn’t clash. Try something in lavender.

Who do you think wore it best? Dr. Kent Brantly? Nancy Writebol?
Nina Pham is adorable. I think it was very age appropriate and trendy. You don’t want to be too old—she’s like 23 or something—so I think Nina did it best. That’s the age when you want to have Ebola.

What’s the best way to lose the holiday weight?
Kill yourself. Dying is a great way to lose all of your weight forever.

The Activist Clothing Line Behind a Melania Jacket Clapback Opens a Pop-Up in L.A.