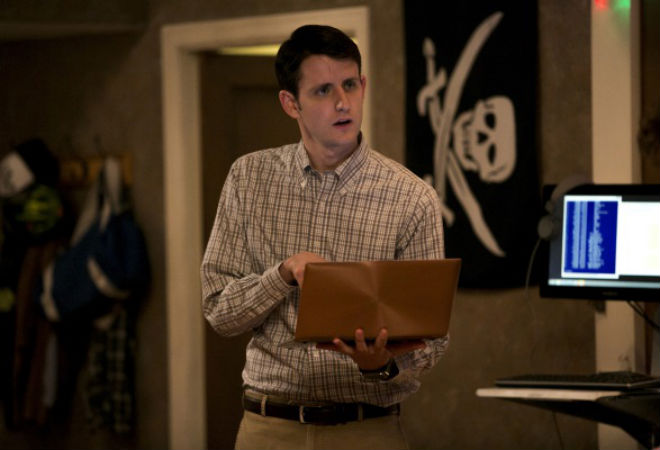 In one of the later seasons of the Emmy-award winning show The Office, Zach Woods’s character, awkward, clammy Gabe, has a showdown with his Dunder Mifflin supervisor Andy (Ed Helms) over their shared love interest, Erin, the receptionist played by Ellie Kemper. Entering Andy’s office, Gabe closes the door and the blinds. Like viewers, Andy expects a faceoff. Instead of issuing threats, Gabe bursts into tears and pleads with Andy to stop pursuing Erin. “I can’t be alone with myself anymore” he sobs.

The scene ends with a weeping Gabe leaving Andy’s office wearing a ridiculous grin because he doesn’t want anyone else to know he was crying. In classic Office style, it’s obvious that all of his coworkers overheard the encounter.

Like most of Woods’s characters, Gabe is self-deprecating, socially inept, and anxious, but he has the sort of complicated personality not often seen in comedy. The speed at which Gabe devolves from steely determination to self-pitying mess is masterfully done and his cartoonish forced grin is the cherry on top. But on second viewing, the scene isn’t funny; it’s heart-wrenching.

Few actors can do that sort of character work, heavy on the compassion and without a morsel of cynicism. Wood’s onscreen alter-egos veer toward wallflowers and also-rans, the behind-the-scenes guys whose work goes unnoticed. They have a tragic quality that stays with you. More often than not, they’re also genuinely nice people.

“A show can be whip-smart and really funny, but when the main point seems to be that people are assholes, it’s just tiring,” says the 29-year-old actor. He’s currently starring alongside Thomas Middleditch, Martin Starr, Kumail Nanjiani, and T.J. Miller in the Mike Judge-produced HBO show Silicon Valley, which follows the travails of a group of (refreshingly complicated) computer nerds as they establish a tech startup. “It’s just clever packaging of an essentially depressing idea.”

Acting wasn’t always in the cards for Woods, who was born in Trenton, New Jersey but grew up in Pennsylvania. “When I was a kid I wanted desperately to be a jazz musician,” he says. “I would practice the trumpet for hours, but when I got braces that messed up my ability to play, so all of a sudden I had all this free time.”

His older brother, who went to college in New York, told Woods about a show he had attended at the Upright Citizen’s Brigade. Woods hadn’t lost his interest in performing, so in high school he started making the trek by train into the city, where he took improv classes and eventually began performing at UCB. “By the end of high school, I would do shows at the theater at night and then take the train home and go to school the next morning.”

In 2010, after ten years of performing and teaching improv in New York, Woods moved to L.A. upon landing roles in the British political satire In The Loop (written and directed by Armando Iannucci, creator of Veep, on which Woods has also appeared) and as the returning character Gabe on The Office.

“When improv is bad, it’s excruciating to watch and to be involved with it is a unique type of torture,” Woods says. “But I’m a very anxious person and it’s hard for me to be in the moment. Improv demands that you be in the moment. It’s one of the times in my life where I feel completely present because it’s so demanding of your attention, your thoughts, and emotions.”

Improvisation is always at the heart of Woods’s performances, and he considers himself lucky to be able to work with people who’ve accommodated that. “It really helps me to loosen up and connect with the other people in the scene if I can mess around and improvise,” he explains. “Mike Judge and Alec Berg [executive producers] are really great about that on Silicon Valley. It’s kind of improv paradise. If there’s not something immediately there you can riff on, the script is still so strong that it doesn’t matter.”

Woods’ character on Silicon Valley, Jared, the startup’s tentative and diligent business consultant, reflects the comedian’s trademark style. “He’s a character who is completely without an ego,” Woods says. Although he is the constant target of ridicule, Jared is in many ways the heart of the show, the character that brings the others together. “He’s the type of guy who makes a big meal for everyone and then is like, ‘You guys can start eating, I’ll just go do some dishes.’ I feel very affectionate towards that character. He reminds me of certain types of moms, who are just always trying to make their families feel good, to a point where they almost deprive themselves of the most basic comforts.”

Woods’s empathy for the characters he personifies imbues his performances with a verisimilitude that reflects lived human experience. “I went to a therapist who wasn’t very good,” Woods says. “I only saw her once, because during our session she said, ‘Well, I think it’s very interesting that you’ve chosen comedy as your vocation, because it’s a profession where there’s no sadness.’ My first thought was, what are you watching if you think comedy is without sadness?”

For Woods, funny situations only come from real places. “One of the people who really shaped me is Martin Starr [Woods’s fellow cast member on Silicon Valley]. His performance in Freaks & Geeks changed the way I thought about comedy. Characters don’t have to be zany and quirky. If you can play an ordinary person in an honest way that can be the funniest thing.”

Right now, Woods appears regularly at UCB in Hollywood, performing with the Asssscat ensemble and with his partner Neil Casey in Casey & Woods. Silicon Valley was recently awarded a second season, so Woods will be returning to HBO as Jared. But he has yet to watch the show himself. “I’m terrible about that,” he admits. “I don’t like seeing myself on screen.”