Home Uncategorized Meet the Man Who Secretly Shot a Movie at Disneyland—And Lived to... 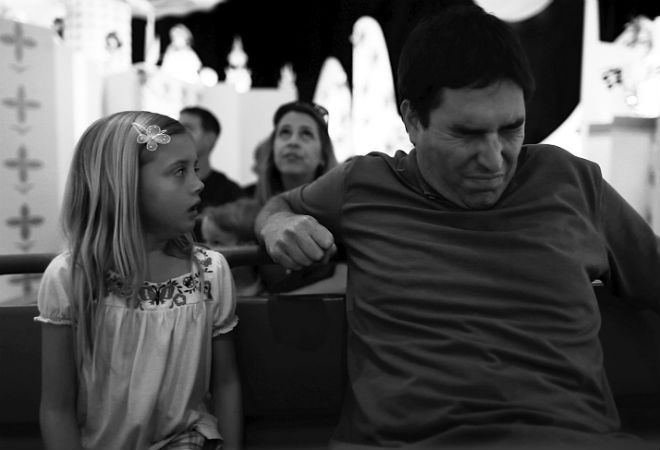 An ordinary family man (played by Roy Abramsohn) freaks out at Disneyland.

After two exhausting weeks of guerilla filmmaking at Disneyland and eleven days of secretly filming at Disney World, director Randy Moore was nearly ready to wrap. So far he and his crew had managed to fly under the radar but they were getting cocky, taking chances.

While shooting a scene near the entrance on Main Street, a security guard became suspicious and approached the actors. He ordered them to follow him for questioning but fate, or at least Mickey, intervened. A parade of Disney characters separated the “family” of actors from the guard. It was the crescendo to a nerve-wracking project he had begun in 2010. “I sent over a PA to tell them to get out of there,” Moore says. “Luckily, they were able to sneak out of the park using the parade as cover. That was the last time we went there with the cast.”

In Escape From Tomorrow, the resulting feature, all is not as it seems in the happiest place on earth. The movie, which kicked off its theatrical run on Friday, follows Jim (Roy Abramsohn), a harried husband and father, as he visits Disney World with his shrewish wife (Elena Schuber) and bratty children (Katelynn Rodriguez and Jack Dalton). He becomes obsessed with two French teenagers and trails them around the park as a nightmarish tale unfolds. The images shot in black and white are stark and disturbing. Familiar icons of pop culture take on grotesque and menacing forms. Jim is haunted by evil Disney characters including a psychotic former princess and a mad scientist as well as his own inadequacies.

Other than a handful of interiors and greenscreen scenes, the film was shot entirely at Disney World and Disneyland—without permission. Making the movie on the sly weighed heavily on cast and crew. “I knew every day could be our last day. It was a lot of walking around. At one point we had to get wheelchairs to transport the kids from one end of the park to the other. They were exhausted. We all were. It was like a vacation on steroids,” Moore says.

He sees Escape From Tomorrow as a commentary on Disney’s pervasive cultural influence. “I thought, morally I have the right to say something about this place,” the director explains when asked about the legality of his production methods. “Disney is deeply enmeshed in our DNA. It’s almost like a church. I’ve seen people have borderline religious experiences there.”

The idea for Escape From Tomorrow has been with Moore since he was a child, when he frequently visited Disney World with his father. “I began to associate it with my dad. He and Disney became inseparable in my mind,” Moore says.

It wasn’t until Moore became a father and brought his family to Disney World that he started to question his deep emotional bond with the amusement park. “My wife is a foreigner and she didn’t have the nostalgic relationship to Disney I have,” he says. She experienced the sugar-fueled chaos, sweltering Florida heat, and crowded rides differently. “She’s a nurse, and at one point she turns and says to me, ‘This is worse than working the psych floor at the hospital.’”

Moore’s crew used a high-end DSLR camera, the Canon 5D Mark II, which enabled them to fly under the radar. “Cameras are ubiquitous at the parks. Going in without one would have probably raised more suspicion.” The popular camera can be purchased at any major electronics store as can the rest of the equipment. Audio tracks were done using handheld recorders and actors read their lines off smartphones.

“I thought Orlando would be the hardest location to shoot at,” Moore reveals. “We were expecting rain, but we had perfect weather. When we got to Anaheim it was literally pouring down. We have hours and hours of footage from inside the Tiki Room, because it’s the only place we could shoot when it rained.”

Disney has yet to respond to Moore’s dystopian recasting of their brand. “I didn’t crack the law books before starting. I wanted a complete version done before considering the legal ramifications,” Moore says. Outside of the film festival circuit, he never expected Escape From Tomorrow to see the light of day. When the Sundance Film Festival picked it up, much to his surprise, a disclaimer was added to the opening credits and Moore’s distribution company hired legal representation.

Regardless of what consequences Moore may face as a result of Escape From Tomorrow, the filmmaker’s stance is clear. “Disney is so important to people,” he says. “Going to Disney World or Disneyland is like a rite of passage. You have to be able to critique and parody that.”

Catch “Escape From Tomorrow” at Playhouse 7 in Pasadena where it’s running thru Oct. 17.