Home Art Meet the Man Who Customizes Your Art Experience 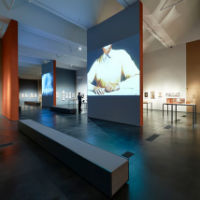 If you’ve seen exhibitions at the Hammer Museum or LACMA in recent years, odds are you’re familiar with the work of Scott Flax—though you may not know it. Flax designs the color schemes for art shows, matching the tone and pigment of the walls and information displays to the work that’s on view. The careful control of lighting, paint colors, and even different shades of white can enhance, even transform, a viewer’s understanding of the art on display. If your automatic mental image of an art gallery is a blank white space, think of Flax as a one-man army intent on changing your expectations.

“I’ve known I have this ability with color and space since I was very young,” says Flax, who grew up in New York and has painted for as long as he can recall. After graduating from Pratt Institute, Flax worked as a muralist. Approximately 15 years ago he says he began to feel his age and knew it was time to get off the scaffold. His understanding of the ways color and space work together presented him with a new career: as an architectural colorist working alongside interior decorators and architects to create color schemes for the homes of clients. Architectural colorists choose every color in the private homes and public spaces they design, from exterior paint to the shades of furniture and textiles.

When Frederick Fisher (of the architecture firm Frederick Fisher and Partners, currently at work on a striking new building for Santa Monica’s Crossroads School for Arts & Sciences), with whom Flax had previously been in a watercolor painting group, approached Flax for his color expertise on Art of the Americas, Santa Barbara Museum of Art’s 2004 exhibition of art from the United States and Latin America, Flax started down a career path he has largely paved himself.

“I am a new resource for museums,” says Flax, who has designed color programs for high-profile Southern California exhibitions like Hans Richter: Encounters and Calder and Abstraction: From Avant Garde to Iconic at LACMA and Expressionism in Germany and France: From Van Gogh to Kandinsky, which opens June 8 at LACMA. “There’s a big learning curve for everyone because museums are not used to having architectural colorists come in and work with them. Color can be a very consuming aspect of a project. For decorators and architects it’s nice to have someone whose singular agenda is that. I set up a kind of sandbox for people to play in,” Flax says.

When conducting research for an exhibition, he likes to immerse himself in a given subject to understand the historical context as well as the aesthetic. “I try to get a feel for the gestalt of the period, whether it’s 17th century or 20th century. It’s about a lot of homework and understanding what we’re trying to illuminate.”

One of Flax’s favorite exhibitions to work on is Bodies and Shadows: Caravaggio and His Legacy, which ran at LACMA two years ago. “In exhibitions, the go-to on Caravaggio is always the dark colors of Italy, of the Baroque, and of Europe,” Flax says. “I came up with an extremely tear-down color palette, in which the perimeter walls were a kind of off-white that I created so that the whites in the paintings would look fresh. If we had used [architect] Renzo Piano’s white it would have made the lights in the clothing look very dirty.” Instead, Flax “modulated that white, so that when you saw the color of a shirt or the white in some lace, it would have a freshness and aliveness.”

Color design is all about cultivating the right setting for experiencing artwork, Flax stresses. Color taps into viewers’ emotions, and ensuring that the framing doesn’t steal attention from the work is like walking a tightrope. Subtlety is key. “In the Caravaggio exhibition, I worked out a very intricate glazing technique to create a subtle movement of gold, and literally a gold paint so that there would be an inner glow that would happen within the space. It sounds big and bold and glitzy, but it gave off a beautiful matte, burnished sense of gold that created the most subtle interior glow.”

Right now Flax is looking forward to the opening of Expressionism in Germany. “It’s going to be a blockbuster,” the colorist says. “Once you put Van Gogh in the title of an exhibition you completely change the dynamics.”

Check out Scott Flax’s work at the Hammer Museum where the current exhibition Tea & Morphine: Women in Paris, 1880-1914 runs through Sunday, May 18, as well as Expressionism in Germany and France: From Van Gogh to Kandinsky opening June 8.