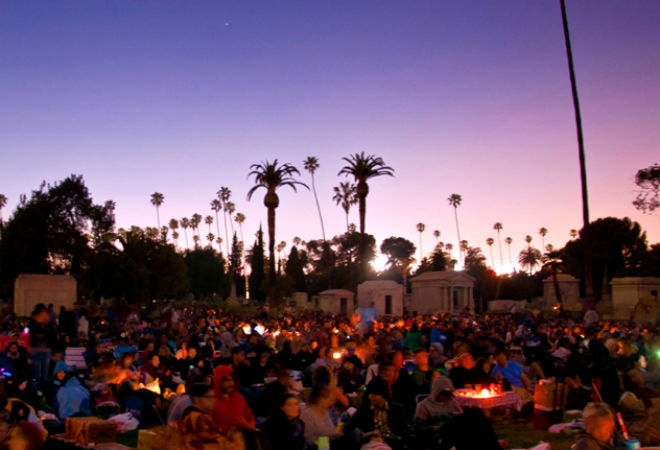 “The number one rule is no death metal here,” says Jay Boileau, executive vice president and director of the cultural events programming at Hollywood Forever. Since 1998, Boileau has worked to restore the Melrose Avenue landmark to its former glory, a task he has accomplished through the gradual introduction of cultural events like movie screenings, memorials, concerts, and a hugely popular Dia de los Muertos festival. But there are limits to what Boileau will do with the space. “We only do events that fit the atmosphere of the cemetery,” he says. “A concert here presents music that speaks to the beauty of the landscape and the unique frame of mind this space encourages.”

Boileau came onboard at Hollywood Forever after the property’s 1998 acquisition by Missouri funeral industry moguls Tyler and Brent Cassity. Boileau, who hails from Seattle but has lived in L.A. since 1988, sees managing the events calendar as a path to realizing his ultimate vision for Hollywood Forever. “Our goal was to restore a forgotten gem and make the cemetery a place for the dead and the living,” he says.

“When we came in in 1998, there were only three people working here,” he explains. The cemetery needed a massive overhaul. “The lawns were mowed, but the buildings were in terrible shape. All the mausoleums were leaking, headstones were leaning, and the office building was full of overturned furniture and mouse skeletons.” The new management’s top priority was making Hollywood Forever a cultural center.

“We had a lot of creative ideas about how to revitalize the cemetery,” Boileau says, “but our event program really grew out of the annual Rudolph Valentino memorial event.” The iconic silent film star has been commemorated at his gravesite for years, but Boileau and his partners decided to amp up the event by screening one of Valentino’s movies. “The first time we screened a movie at the Valentino event, 600 people showed up. We were shocked. That’s a lot of people for a silent film.”

Since the first screening at the cemetery, picnic-style movie nights have become incredibly popular, due in part to Cinespia. The organization is in charge of programming the cemetery’s independent cinema events, including last year’s screening of the final episode of Breaking Bad with the show’s cast. “What makes our events special is that there is no advertising, no vendors, no sponsors,” says Boileau. “Instead of this being an obstacle, it’s actually worked out well for us. It’s a completely different experience from what you get anywhere else in Los Angeles.”

Anyone who has attended concerts at Hollywood Forever knows that they can be transcendent experiences, whether in the intimate setting of the Masonic Lodge or out on the lawn. “The first concert we did, in 2009, was a sunrise concert with Bon Iver,” says Boileau, who curates the cemetery’s concert calendar with the assistance of former Troubadour booker and consultant Brian Smith. “We opened the gates at midnight and treated it as a sleepover on the lawn with a performance at sunrise.” The whole night was programmed with movies and music. Just before the band went on, nine Buddhist monks came out and blessed the audience and the stage. “A really thick fog rolled in around 4:30 a.m.,” Boileau recalls, “which we thought was going to be a problem, but it actually made the concert much more beautiful. People still talk about that concert. It’s legendary.”

According to Boileau, experiences like this one are possible only within the walls of Hollywood Forever. “Whether consciously or unconsciously, when you step onto the grounds you’re pondering your mortality,” he says. “It’s a mindset that allows you to be open to the experience of art.”

After 20 Years, Outdoor Movies Series Cinespia Is Better Than Ever