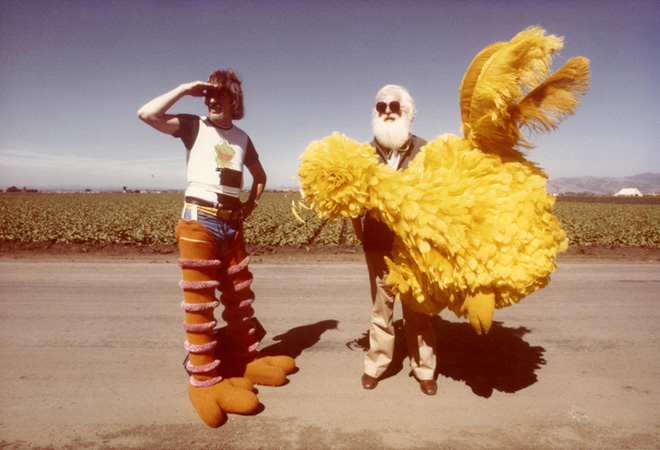 I never would’ve imagined that I’d hear Big Bird say hello to me. But that’s exactly what happens when I got on the phone with Carol Spinney, the man who has played the beloved Sesame Street character since 1969. As you grow up the magic tends to leak out of the world, but when Spinney greeted me in-character as Big Bird, a temporary but joyful regression occurred. Such is the power of Sesame Street. And that’s a power Spinney is fully aware of. He’s the subject of I Am Big Bird, a nostalgic documentary that’s currently playing at the Los Angeles Film Festival.

While most of the other performers who play Sesame Street’s iconic characters are crammed together behind scenery or beneath the camera frame, Spinney’s gig requires him to get into a large, unwieldy suit. Making this work took some tweaking for Spinney and his collaborators. “I can see the person Big Bird is supposed to be talking to on this tiny monitor,” he explains. “The first year I didn’t have that, so my performance wasn’t so good.”

Suit acting (Spinney also plays Oscar the Grouch) keeps him comparatively isolated from his fellow actors. “It feels slightly lonely, but thanks to the cameras they have on the set I can see what you see at home. And that’s just what I need, so I can act out what either of the two characters I play are doing and how they relate to the people in the story or to the kids at home.”

Big Bird and Oscar have been a part of Sesame Street since the show’s beginning. Spinney is the last major performer from the original roster who is still active with the show, the rest having retired or died. Asked about the show’s continued appeal, he muses, “One of the cleverest things about Sesame Street, right from the start, was how they realized they had to make it a show grown-ups didn’t mind watching. I was watching it this morning, and there was a scene based on Les Miserables. When we started the show, many of the homes we wanted to reach only had one TV. If we made the grown ups laugh, they’d keep it on our channel. That’s part of the genius of that show.”

Now 80 years old, Spinney has a dedicated understudy, Matt Vogel, who assists in the role of Big Bird. Spinney remains spry but the physical aspect of the job sometimes requires assistance. “The most important part of it is his voice. I think the bird will sound pretty much the same, and that’s the important thing,” he says, lapsing into the Big Bird voice to assert, “I’m still six-and-a-half years old!” His voice does, indeed, sound the same. “I don’t tell Matt very much how to do the physical performance. Because he works so closely with the show. I think that the spirit of Big Bird will live on through him. He’s very sensitive and great with the kids. I think he’ll do a good job.”

For now, though, Spinney is still Big Bird, as the title of his film testifies. Muppeteer Jerry Nelson, who is glimpsed in the documentary, died in 2012, which means kids watching Sesame Street now will hear Vogel’s voice when they think of The Count the way I hear Steve Whitmire’s voice not Jim Henson’s when I think of Kermit. Spinney is still going strong, and I Am Big Bird is a sincere tribute to his work. We say our goodbyes and I get another unexpected jolt of nostalgia as Oscar the Grouch wishes me a rotten day. Which, strangely, made me want to have one.

From Puppet to Muppet, Ted Cruz is Now Arguing with Elmo

A New Jim Henson Exhibit Has More Than Muppets