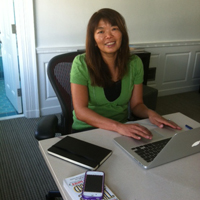 Every couple of a years playwright Lucy Wang needs a change of pace. So she does what she’s been doing, roughly biennially, for almost 20 years: she applies for a writers’ residency.

If you’re not familiar with the concept, think work retreat for writers seeking mojo. Sapped dry by the exigencies of daily living—in Wang’s case, that’s teaching writing at local colleges, which she loves but finds draining—they escape to mountain towns, island resorts, or breezy beach houses for a short amount of time in order to replenish their creative juices.

You might call Wang something of a serial resident. Flipping through the most recent issue of Poets & Writers, which happened to be on the subject of writers’ residencies, she thought to herself: “God, I’ve been to a lot of these.” At least ten, technically, and eleven if you count a visiting professorship at USC. Her residencies have taken her from the MacDowell Colony in New Hampshire to Whidbey Island in Washington, from the mountain towns of Colorado to the beaches of Florida and to the Annenberg Beach House in Santa Monica, where she’s been since January and will stay until the end of the month.

Each of these places has been a chance for Wang to produce fresh work for the stage, which she’s been writing for since the mid-’90s.

Wang’s not one of those writers who talks about scribbling little stories in diaries since she was a small child. In fact, she’s a student of business and economics. She has an MBA from the University of Chicago and worked for a time as a bond trader in New York before getting a job in Mayor Dinkins’s administration. But the arrival on the scene of Rudy Giuliani cut short those plans, and Wang found herself jobless.

That’s when she turned to writing—“to keep myself sane”—and discovered a natural talent. The work that immediately resulted, including the plays Junk Bonds and Bird’s Nest Soup, would go on to see productions in such places as the Mark Taper in Los Angeles, and win awards like the Roger L. Stevens Award from the Kennedy Center Fund for New American Plays. “Being a writer, there’s no really one path,” she says. “I think my background shows it.”

At the Annenberg Beach House, Wang’s been working on comedy monologues, a first for her, and adapting her YA novel Teen Mogul into a play. She works in a spare room above a parking lot—a bit of a bummer, she says, because one side of the house overlooks the ocean—but she says the “light is just incredible” and the atmosphere is generally conducive to working.

She is obligated to host some workshops for the community, and she holds office hours for writers seeking her advice (we met Wang by dropping in). Some visitors want to know what they should put on their own residency applications, but most are looking for help with writing. As much as she craves alone time, Wang finds the sessions with the community rewarding, inspiring, and necessary.

“There’s a magic in sharing your stories and sharing your laughter that you can’t put your finger on,” she says. “I think today, when we do so much by e-mail and texting and Twitter, it just reminds me that it’s really important to have some face-to-face contact.”

Occasionally, Wang thinks back to her bond trading days and wonders if she could have become as successful as some of her rich friends. Just think of all those writer-in-residency applications she could have avoided.

“Sometimes I think the arts saved my life,” she says. “Because I could have been in that tower.”