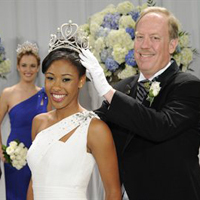 Seventeen-year-old Drew Washington is a senior at Flintridge Sacred Heart Academy in La Canada Flintridge. She’s also this year’s Tournament of Roses Rose Queen. Between arm exercises and practicing her wave, Drew told us about the Royal Court tryout process and how it’s good to be queen

When did you first experience the Rose Parade?
I’ve watched the Rose Parade ever since I was little. I live right around the corner form where the parade goes by, so me and my parents would always go down and watch. The Roses Parade is such a strong tradition within the city of Pasadena, it’s almost impossible not to watch it.

You’ve gone from being a spectator to the Rose Queen. What was the tryout process like?
I think it’s a tradition for all senior high school girls to try out for the Tournament of Roses. I’ve seen friends try out and been waiting to do it myself since freshman year. One of my best friends, Katie Hernandez, was on the court two years ago, and she has always been a mentor to me. She drove me to try out. About one thousand girls try out, and we go through four consecutive interviews, then the group is cut down to 250 girls. From there it goes down to 75, then 30, and then the final seven who are on the court.

That’s a lot of competition. Did you get nervous?
I was! It was one of the most nerve-wracking things I’ve done in my entire life. You don’t know what’s going to be asked, so you can’t really prepare yourself. What I learned is that it’s not about what you say, it’s about how you conduct yourself.

What was it like to hear your name called at the end?
I was overwhelmed! I had a bunch of my school classmates there supporting me, and when I was called they were cheering and screaming. I looked into the audience and saw my parents crying. I think the first thing I thought was, Wow, I actually did it, but what did I get myself into? But this whole time has been one of the most memorable experiences of my life.

Have you practiced your wave?
I have! I’ve been taught the wave along with the court and we’ve been practicing every day and doing arm exercises to get our arms prepared.

What happens after the parade?
After the parade we get to go to the Rose Bowl Game, and I am a huge football fan. We like to say ‘once a princess, always a princess,’ but after that I will go back to normal life.

No one who likes football roots for a tie!
OK, I don’t want a tie. But I’m sure if either team wins it will be great.

The 2012 Tournament of Roses Parade will take place on Monday, January 2.