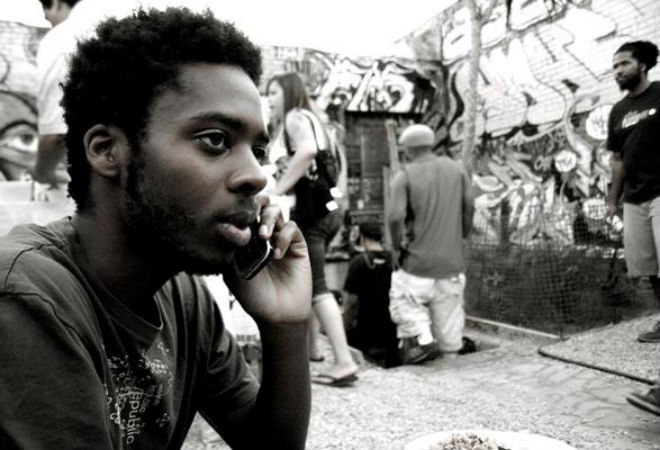 “When you’re battle rapping, you’re trying to be one of three guys,” says James McCall, better known by his stage name, Nocando. “You’re either angry, funny, or the underdog.” Growing up in South Central, as a teenager Nocando became involved with Project Blowed, an open mic workshop in Leimert Park where rappers practiced their freestyle skills. He discovered early on that he had a natural affinity for words and an aptitude for the art of rhyming insults, better known as battle rapping. In 2007, Nocando won the title of Emcee Champion at the prestigious Scribble Jam hip-hop festival in Cincinatti. But battling was always a means to an end for Nocando.

With the coming release of his second solo album, Jimmy the Burnout, following 2010’s critically acclaimed Jimmy the Lock, he’s ready to unleash another batch of witty, viciously sardonic, and infectiously catchy rhymes encased in smooth beats on the world. We talked with Nocando, who’s also the CEO of record label Hellfyre Club, about battling, losing your job, and writing rap characters like a comic book artist.

❶ “I started rapping in high school,” he explains. “I’m not a quick talking dude. But I liked rap and freestyle and I was always good with one-liners and little observational truths.”

❷ He describes his grandmother as a tiger-mom who made him take music classes early on. “I probably have a little bit of an edge today with that latent knowledge of music.”

❸ Nocando didn’t start out as a battle rapper—he released his first EP in high school—but as he says, “The battle thing just gets a lot of attention. As I grew older I kind of came to hate it even though I kept doing it. I really don’t like putting people down, but I kept doing it for the money.”

❹ “When I was waiting tables I would make about $600 a week. But because I was good at it I could get a $1000 out of one night battling. I’m a husband and a father and battle rapping has bought many diapers for my daughters and helped my wife go to college. I knew why I was doing it.”

❺ Being a good battle rapper doesn’t automatically translate to being a good recording artist. ”Battle rap is like theater,” says Nocando. “The way you add character to your voice when you’re battle rapping is totally different from the way you do it when you’re in the studio.”

❻ Character is important for Nocando who sees the progression of his persona on Jimmy the Lock and Jimmy the Burnout as a narrative arc not dissimilar to those in the comic books he grew up reading. “My favorite comic book artist is Mark Waid,” he says. ”There’s a kind of evolution in his characters that I relate to.” The inspiration he gets from comic books or the animé films he used to rent at the local Blockbuster is abstract, though. “I look at this character I have created, Nocando, and I think about where can I take him next. Jimmy the Burnout, is almost a three-year-old character at this point. Where do I take him next?”

❼ He’s never considered himself an intellectual guy. “I was just a young nerd in South Central with a Blockbuster card.”

❽ Jimmy the Burnout, which was recently mastered in preparation for the release, is about the experience of life in the late 2000s, he says: “I try to write about things that I don’t hear people talking about, like the job crisis. But it’s also about how people have come out of it and own it.” He tells a story about an acquaintance who lost his job and became a professional MMA fighter instead. “That’s what the album is like. It’s on a real conversational level, too. It’s the same way your barber would talk to you.”