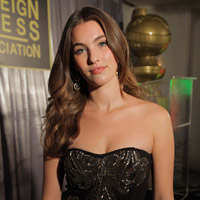 Rainey Qualley, Andie MacDowell’s 22-year-old daughter, is the fresh-faced honoree who will hand out statues at this year’s Golden Globe Awards

Congratulations! The Golden Globes are coming up. Are you crazed getting ready?
I’m actually not in L.A. yet. My boyfriend [Richard Kohnke] and I are moving there, and we’re on the drive, somewhere in Louisiana. But everything will start happening once we get there.

What was it like to find out that you would be this year’s Miss Golden Globe?
I was really excited. I wasn’t expecting it or anything. I had interviewed like two years ago with the Hollywood Foreign Press and I obviously wasn’t selected that year but this year they called up out of the blue and asked if I was still interested.

What will your official duties be?
To help escort the winners on and off the stage and give them their trophies. I think, really, the hardest part will be standing up there in heels for hours.

Which brings us to fashion. Do you know what you’ll be wearing?
I’m not sure exactly which dress I’ll be wearing yet. When I was last in L.A. I got to work with [stylist] Brad Goresky and tried on like twenty dresses. He was so nice. I narrowed it down to my top three or four favorites, and then the Hollywood Foreign Press will select which they want me to wear. One is green and a ‘50s vintage look, and another is tight with silver beads. I think they’ll pick what will go best with the stage and ceremony.

Are you nervous to be on stage and on TV in front of so many people?
I am! I have a tendency to be clumsy and I really don’t want to fall. But it’s good nerves. I’m excited to meet everyone who will be there, and I’ve really never been to an awards ceremony like this. I went to the Cannes Film Festival with my mom when I was in eighth grade and then I’ve done some small red carpet things but when I went to the announcement event a few weeks ago, that was the first time I ever walked a red carpet by myself.

Has your mom given you any advice?
She always tells me to be as prepared as I can be for everything that I do. She’s really excited for me. She thinks it is going to be a great opportunity and we’re both just looking forward to the night of the show.

What about past Miss Golden Globes? Have you spoken with any of them?
Gia [Mantegna], who was Miss Golden Globe last year, told me to wear comfortable shoes because you are on your feet the whole night, and Dakota Johnson told me not to wear gloves because she almost dropped all the trophies.

You’ll be sharing the stage with Ricky Gervais, and he can be pretty outrageous. Any concerns?
I haven’t spoken to him yet. I do follow him on Twitter though, so I’ve seen a few of his Golden Globe shout outs, and I love The Office. It will definitely be entertaining with him.

Is there anyone in particular that you’re hoping to meet?
I’m just excited to have the chance to be surrounded by every actor that I can think of. That’s going to be fun. I don’t really have any celebrity crushes, but my boyfriend and I watch the American version of The Office together, so hopefully I’ll get to meet some of the stars.

What happens after the show?
I think we are going to go to the InStyle Magazine after party. Everyone says that one of the best things about the Golden Globes is that everyone gets to drink, so by the end of the show everyone will be ready to party.