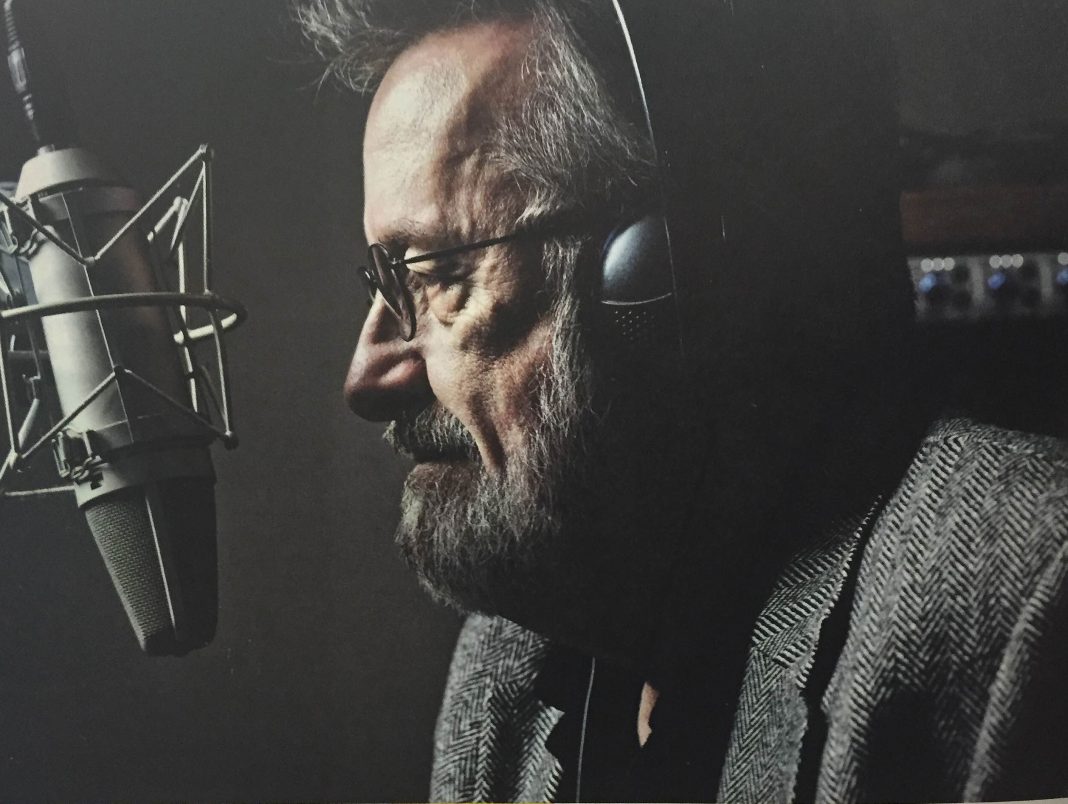 Jesus meets Bonanza,” says Jim Svejda, describing the CD he’s sliding into his car stereo. A xylophone zings. The sound of galloping horses fills the BMW 328i. Svejda speeds up. A clarinet launches into “God Rest Ye Merry, Gentlemen.” He takes bath hands off the steering wheel and wiggles them in the air to the Philadelphia Orchestra’s campy 1962 recording. Svejda’s jaw drops into a smile. “Isn’t it nuts?” he says.

He ejects the disc and slips in something more serious. The third movement from Piano Quartet no. 1 by Bohuslav Martinu, the late Bohemian composer, has the qualities Svejda loves most in classical. “Abstract, distinct, nobody knows what the hell it is,” he says. “It’s utterly haunting.” But this new version, by a Czech quartet, trickles from the speakers. Svejda’s face clouds behind his amber prescription sunglasses. “Bad sign already,” he says. “It’s thin.” A piano sounds a few chords. “You’re joking!” he says, raising his voice. Before the strings have a chance to kick in, Svejda cries, “Oh, Jesus, this is unendurable.” He jabs at the stereo. “Can you say ‘mannered and précieuse’?” He chucks the CD over his shoulder into the backseat. “Well, they were commies until not long ago,” he says, “so you can’t blame them.”

Jim Svejda has expressed his strange love of “serious music”—his term that includes film scores, classical music, and jazz—week-nights on KUSC-FM (91.5) for half his 63 years. Since 1978, he has helped turn the former student station at the University of Southern California into the nation’s premier public classical outlet. He added a weekend broadcast in 1983. KUSC’s weekly audience of 814,200 puts it among the top five public stations in the United States. Its stature, along with Svejda’s iconoclastic style, has made him one of the preeminent announcers in classical radio. Along with L.A.’s shiny concert hall, sexy young conductor, and lucrative film studio work that attracts famous composers and conductors, Svejda has transformed the city into what he considers to be the global center for orchestral music. “He is classical music personified,” says Brenda Barnes, president of KUSC. More than that, he is eccentric enough—a ball of contradictions—to attract new listeners to a genre many worry is in decline.

DJs on classical stations are called “announcers” rather than “personalities,” maybe because so few have any. Svejda, however, is so flavorful that he has earned “love to hate him” fans who chafe at his hamminess or his taste. An announcer’s job, Svejda says, is to provide a little bit of context and then “get out of the way.” In reality he calls attention to himself with wacky banter. He informs listeners that a composer was a syphilitic or a Nazi. Often he underscores the eroticism of a movement. Last October he played a romantic symphony by Sergei Rachmaninoff. “Sergei … it’s just too much! Take me away!” he swooned in an accent that, despite efforts, still sounds Midwestern. Low, resonant, straining here and pausing there, his voice has become clearer thanks to sessions with the vocal coach who works with all of KUSC’s talent. “I get this uncontrollable urge to light up right now. Great music has two great themes: God and sex. This is not about God.” Describing another piece as “brazen,” he said, “I mean that in a good way. Does brazen have a downside? There’s that expression ‘brazen hussy,’ which I have always thought of as … you don’t need to know.”

If he’s not saucy, he’s silly. Soliciting donations during last fall’s pledge drive, he took bids on the rubber chicken attached to his key chain. “Herbert for $200?” he cried indignantly. “Are you nuts?”

Barnes filled in for Svejda while he was on vacation last year and immediately received five e-mails from listeners who said versions of “Thank goodness it’s you and not him.” But, she adds, “there they were at 6:59 waiting for him to come on the air. They listen to every word he says so they can quote him when they complain. Only Jim has this group.”

If there’s a stereotypical look for a classical music lover, Svejda has it: the understated clothing—he’s always in head-to-toe black—the salt-and-pepper beard and mustache, dark gray hair, and wire-rimmed glasses. But on the air he is as gushy as a boy in love for the first time. “Jim has a young following because he is able to make classical music cool,” says Michael Medved, the conservative talk-radio host who is a close friend. “His message is that music is fun. He is a great believer in what animated Beethoven and Brahms, which is the idea that ordinary people can thrill to this music.”

Svejda’s name reveals his ancestry. Pronounced SHVAY-da, it means “the Swede” in Czech. The location of his hometown gave him an antagonistic streak. New Buffalo, Michigan, sits across the lake from Chicago. “Every summer,” he jokes, “men would come over from the city and steal our women.” He hated the Cubs. His father, who weighed trucks for the highway department, was a classical music aficionado who took his son to concerts. “I was a jumpy kid,” Svejda says. “This was one of the only things I would sit still for.” At 11, he took up the oboe, which he practiced for eight hours a day. He possessed the aural equivalent of a photographic memory, which has sharpened over time. Needing no more than a few hours’ sleep at night gave Svejda the opportunity to pursue other passions. He collected nearly every baseball card in the 1957 Topps series. He cannot count the films he has seen more than 100 times.

In the late 1960s, Svejda attended the University of Michigan at Ann Arbor. He holds degrees in philosophy, history, literature, and—almost—African studies. He took part in draft protests to meet girls. “That was the reason most males of the period did political stuff,” he says. “The prevailing myth was that the women were similarly liberal in their sexuality. Which proved to be an utter myth. At least for me.” In all-or-nothing fashion, he gave up the oboe. He would never be truly great, he decided, so there was no point in playing.

“I don’t have a voice for radio,” Svejda says. Yet he chose a career in broadcasting and landed a paid job at WONO in Syracuse, New York. There his unorthodox style was born. The station’s 26-year-old owner, Henry Fogel, rejected stuffiness for a more personal and passionate approach. He and Svejda thought it would become the norm for classical stations. (It didn’t, of course, but Fogel’s other innovation, the radio pledge drive, did.) Svejda moved on to the larger WCRB in Boston, then to San Francisco to make radio documentaries about composers. He missed being live on the air, so when KUSC called in 1978, he came to Los Angeles. It took him only a week to get over his preconceived notions of L.A.’s superficiality and embrace its “crazy experimentation.” He dated so many women of different ethnicities that his mother suggested white ones must have seemed exotic. He even learned passable Chinese.

On his weeknight show he frequently interviewed conductors, composers, musicians, writers, and directors. He also condensed selected recordings from the show for The Record Shelf, a weekly one-hour program. Syndicated nationally, it heightened both KUSC’s profile and his own.

As he grew in importance and boosted the station’s ratings, Svejda’s life took a series of unexpected turns. A self-described “standard-issue ’60s radical,” he swung politically to the right, even though he continued to work in public radio, which most conservatives would like to defund. Now a registered Republican and a fan of Rush Limbaugh, he says life experience extinguished liberal guilt he had felt about the disenfranchised. “I think everybody should get exactly what they think they deserve,” he says, “and just shut up about it.”

Svejda transformed spiritually, too. His parents were raised in Christian households, but in the 1990s he attended orthodox Jewish services. “I’ve always been an orthodox agnostic,” he says, which means, “I don’t know, and I wish I did. But Judaism is so civilized and so logical and so totally admirable.”

At 42, Jim Svejda marked a decade at KUSC and entertained no notions of leaving. Los Angeles would be his home. He was writing a new edition of The Insider’s Guide to Classical Recordings, his 900-page book. KUSC was close to passing a half million listeners per week. And then Svejda had a heart attack. His skin was blue when he arrived at the hospital. He recalls being vaguely aware of people trying to save him. “I saw the lights and hovered from above,” he says. “I had a sense of sitting on a big stone wall and having this irresistible urge to lean over and jump off to get to the other side. There was also a sense of absolute euphoria.” After bypass surgery, he quit smoking and drinking, but he did not cut back on work.

The next year, 1989, after he had helped build the nation’s number one public classical station, KUSC switched format. Intended to reflect the diversity of the city and attract young listeners, “the New Sound” was a mix of classical, rock, pop, jazz, and hip-hop. One announcer resigned a week into the experiment. Svejda stayed, though he refused to play the Beastie Boys, or even the Beach Boys, alongside Beethoven. (He equates rock music with finger painting.) He stuck to his “serious” musk and was not invited to participate in fund-raising. “I went in every day expecting to be fired,” he says. Listeners—and funding—declined for seven years. Bottoming out, KUSC hired Brenda Barnes to return the station to an all-classical format and entice back its audience. “We had Jim Svejda,” she says, “which was critical.”

With Svejda at the nucleus of a hopeful staff, the fans returned, and the station’s annual budget climbed from $2 million to $6.5 million. Approaching retirement age, he produces more hours of programming than any of the station’s 29 other full-time employees. He edits out every “um” uttered in recorded interviews and takes vacations only when his boss forces him to. “He’s never satisfied,” Barnes says. “Nothing is ever good enough.”

Although Svejda is one of the world’s authorities on classical music, the fact that he cannot master it is what drives him. “It is so big that you will never understand it all,” he says. “Listening to it makes people smarter. It’s been proven. But, like aspirin, no one knows why it works.”

The 8 Performances Everyone Needs to Catch During The L.A. Phil’s 99th Season