Home TV Meet Ambiance Man, the Superhero Who Can Save a First Date 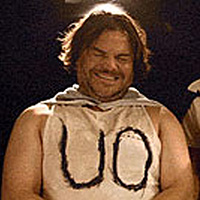 A beautiful woman meets an incredibly awkward man at a restaurant for their first IRL encounter after communicating via an online dating site. They sit at a table; she looks around the room trying to avoid eye contact as sweat pours from his forehead and armpits. Even their waiter senses the awkwardness. Just when the tension becomes unbearable, a man with long flowing hair and colonial English attire joins them. Meet the unlikeliest of superheroes: Ambiance Man.

Last night, L.A.’s the Museum of Contemporary Art debuted the first few episodes of its new absurdist comedy series Ambiance Man. The series, which was created by artist and photographer Alix Lambert, rolls out today on MOCAtv and stars Portlandia and SNL alum Fred Armisen as the do-gooder who tries to improve uncomfortable scenarios while battling his grotesque and highly flatulent nemeses Unidentifiable Odor and Buzz Kill, who are played by Jack Black and performance artist Jibz Cameron (aka Dynasty Handbags).

Amisen opened the night with a performance by his alter ego, Ian Rubbish, a Johnny Rotten-esque punk rocker who just can’t get his angst right. Armisen-as-Rubbish strummed a guitar and performed songs with lyrics like, “Hey Policeman / My boot goes in your face.” His earnestness was obvious; real punks hate everything but Rubbish can never muster quite enough anger. While most punkers would disparage Los Angeles, Rubbish proclaimed his adoration for the metropolis, calling it “the most American [city] because it is the newest.”

Ambiance Man premiered after the performance and a few short videos. The films are purposefully lowbrow and bizarre, aping the low production values of most YouTube clips–along with their humorously excruciating dialogue. After all, YouTube is the new public access TV, where self-produced shorts blossom like daisies in a landfill. Ambiance Man harnesses that aesthetic, combining greenscreen backdrops (filmed at the YouTube Space L.A) and clip-art FX to produce eyeball-melting weirdness.

After the screening, Dynasty Handbags in leopard leggings, cheetah shoes, and tiger undies pulled over her tights, stumbled in front of the audience. Her performance-art-meets-sketch-comedy shtick elevates “hot mess” to the next level. She rolled on the floor, smeared her makeup, and delivered a rendition of the holiday song “Santa Baby,” which she asserted was about the “infantilization of women.” Imagine Peaches on quaaludes and without danceable beats. It was glorious mayhem that fit perfectly with the Ambiance Man ethos: Let your freak flag fly.