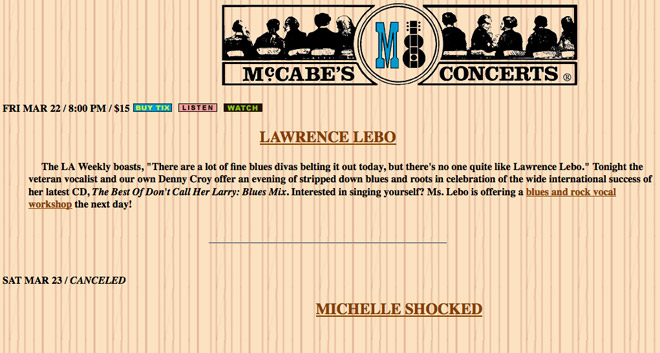 When you describe yourself as “a radical skateboard punk-rock anarchist,” declaring that you live in fear “the world will be destroyed if gays are allowed to marry” won’t win you many fans. In fact, they’ll desert you in droves along with concert promoters and venues. That didn’t stop musician Michelle Shocked.

On Sunday night, her first set at San Francisco club Yoshi’s went off without a hitch. The trouble occured, according to SFist, during the second set when Shocked reportedly went on an anti-gay tirade that included the statement: “You can go on Twitter and say ‘Michelle Shocked says God hates fags.'” Which people did.

Some audience members later noted they felt the show was designed to “deliver this message” and numerous fans couldn’t believe what they were hearing.

Many people assumed that Shocked was gay (this 1990 interview may be why). In a 2008 interview with Dallas Voice she said she wasn’t but was proud to be an “honorary lesbian.” A 2005 New York magazine profile had already revealed that Shocked was a recovering alcoholic, a born-again Christian, and had voluntarily decided to have her tubes tied at age 22 as some sort of bizarre political act in support of abortion rights — a decision she later regretted.

Anyway… Sunday night. The fallout has been ugly. There’s a petition on Change.org urging venues to cancel Shocked’s scheduled performances — and several venues have. That includes west L.A. music store McCabe’s Guitar Shop where Shocked was supposed to perform this coming Saturday.

If her rant was an attempt to win converts, she failed. If it was a covert PSA about How To Commit Career Suicide or Why You Shouldn’t Suddenly Go Off Your Meds, it was remarkably effective.