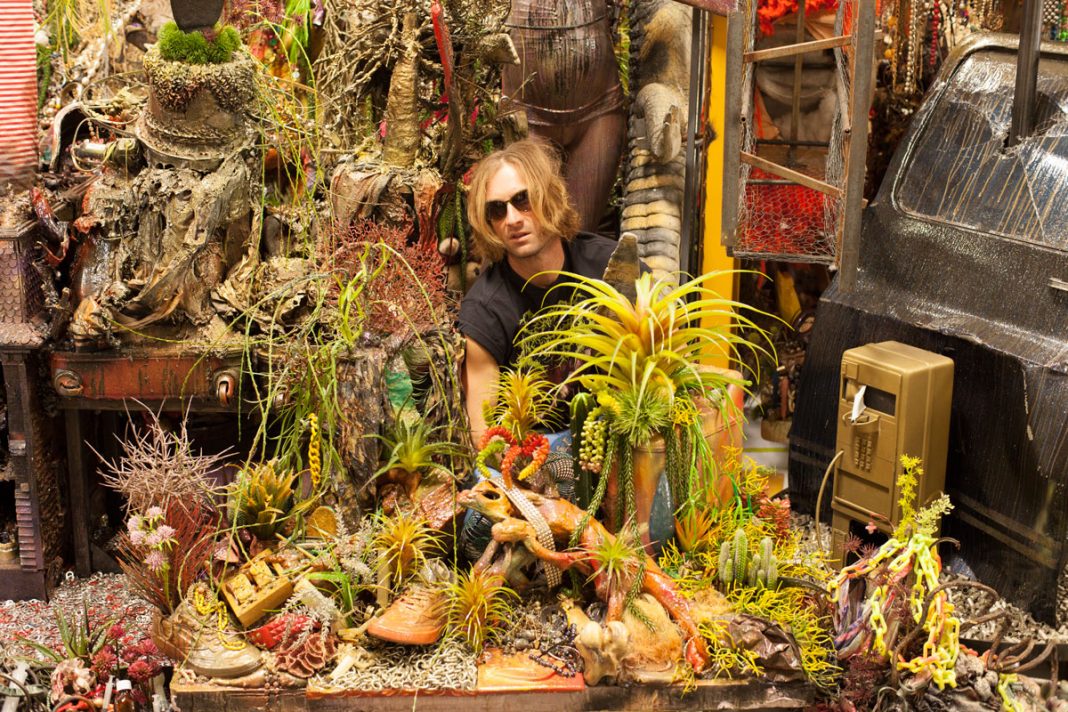 Fresh off a six-mile run—his daily “calibrating device”—Max Hooper Schneider frantically paces around his new 4,200-square-foot red-brick studio in Inglewood. His flaxen mullet is tucked up under a black trucker hat, and his ears’ double-piercings glint in the bright light. The L.A. native has a wiry musculature one might associate with endurance athletes—or sculptors fond of lifting hulking bricolages under the New Mexico sun. For the past two months, Hooper Schneider has been doing just that.

Working long days on his mother’s remote property outside of Santa Fe, he has been feverishly assembling, burning, and epoxy coating an opalescent archipelago of detritus—a small jungle of fake plants, mountains of bullet casings and soda-can pull tabs, horse carcasses, old cassette tapes, porcupine quills, and a gargantuan Raggedy Ann doll and Oreo cookie props from Honey, I Shrunk the Kids—for his first solo museum show. It opens September 21 inside the Hammer’s fishbowl-style Vault gallery.

“You’ll be able to walk around the whole island and look at all the different elements,” explains Hammer curator Ali Subotnick. “It’s a ship-in-a-bottle-type thing.”

Hooper Schneider started making his vitrine sculptures three years ago, and they were quickly scooped up by top museums, A-list celebs, and serious collectors. His exhibition at the Hammer is as much a coup for the institution as it is for him. In many ways, the 37-year-old is the new “It” boy of the L.A. art world, and his dance card is only going to get fuller.

That is, if the world doesn’t end first. Hooper Schneider’s work reads like sardonic field samples from a world just beyond the brink—or just around the corner, depending on your perspective. But his apocalyptic aesthetic doesn’t mean he wants his art to be blatantly political. “I’m pretty neutral,” he says. “It’s not Earth Day over here.”

Still, there may be no emerging artist better equipped to tackle a subject as broad, daunting, and vague as environmental collapse than Hooper Schneider, who has long been interested in the intersection of the natural and constructed worlds. He studied urban design and biology as an undergrad at New York University, then got a master’s degree in landscape architecture at Harvard, where he honed his skills making the sort of models and dioramas he’s been toying with since early childhood.

“My mom always busts my balls: ‘You had to go to Harvard to do exactly what you’ve been doing since you were five?’ ” jokes Hooper Schneider, who grew up (and still lives) in Santa Monica, the beachcomber son of an equine veterinarian father who hoarded antique microscopes and wrote scripts for Family Ties in his free time. His mother was a Spinozan philosopher who taught theoretical urban planning at UCLA. As a teenager, Hooper Schneider illustrated fat folds for Nickelodeon’s iconic cartoon The Ren & Stimpy Show, listened to death metal, and went to clubs like the Smell while studying Japanese on the side. In other words, it’s no surprise he uses the words “Fuck yeah!” “dude,” and “halobiont” in the same breath.

His breakout moment combined his various interests in a 2014 solo debut at Jenny’s in Silver Lake that included a watermelon powering a text display and a popcorn machine filled with freshwater popcorn snails. Artforum declared it a “Critics’ Pick,” saying, “These are artworks that maybe, queasily, will haunt our dreams forever.”

At the Hammer, his dystopian tableaux will experience a day-to-night light cycle every half hour, set to a biorhythmic soundtrack—including a recording of squids. Sea creatures are an ongoing fascination. Housed in a large aquarium in his studio is Carmela, a six-year-old electric eel he procured from the Amazon Basin in Peru.

“I’ve figured out ways for her to power neon signs, lighting systems, charge iPhones, all sorts of stuff like that,” he says, with a mad scientist’s laugh. “My new works are gonna be eel powered.”