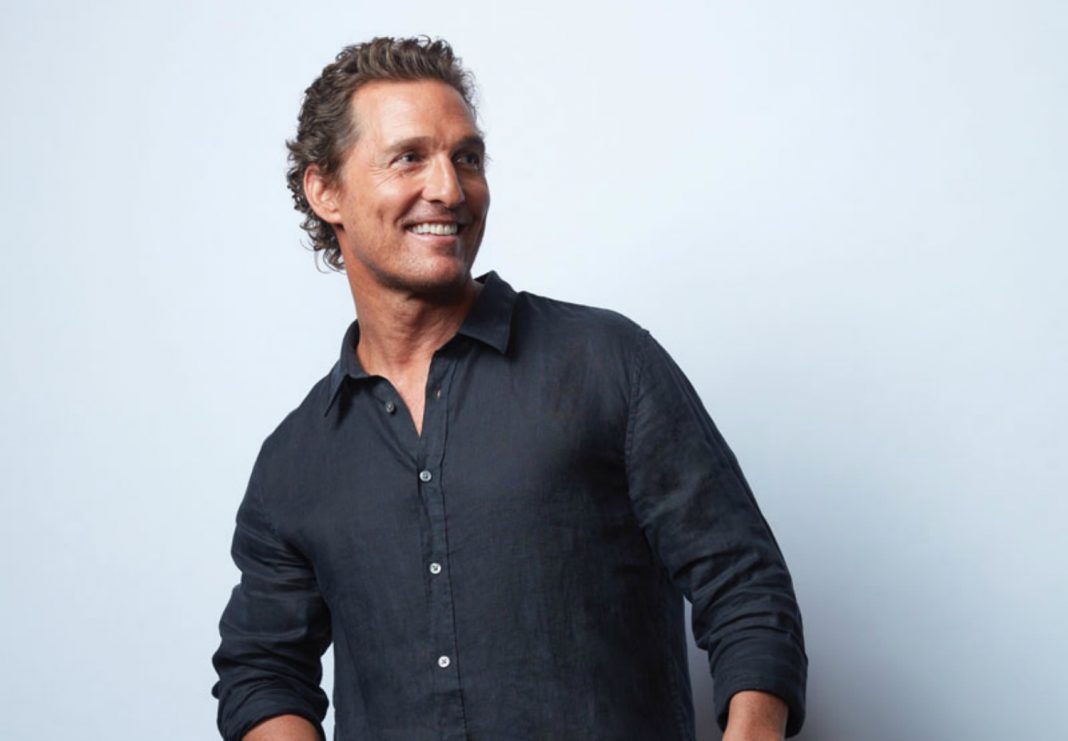 Matthew McConaughey is a busy man these days. The 50-year-old actor recently wrapped a stint as a professor at his alma mater, the University of Texas at Austin, teaching film production. He’s also serving as a creative director for Wild Turkey, helping to develop the company’s Longbranch bourbon. In the midst of the recent Southern California wildfires, he helped prepare and deliver more than 1,600 barbecued dinners to first responders and displaced families. And, oh yes, he’s still finding time to act.

While he once seemed destined for rom-com typecasting, the deceptively dynamic leading man has spent the past half decade collecting Oscar glory and Emmy nominations. Now he stars as a weed kingpin in the new Guy Ritchie flick, The Gentlemen, in theaters January 24. Here he talks about his journey to and through Hollywood.

When did you first move to Los Angeles?

I drove out here on August 12, 1993. I had my U-Haul; I had 2,000 bucks, and I was packed to the gills coming out to Hollywood—here we go. I had Dazed and Confused out—nothing else. I had finished making [that movie] in summer of ’92. So I’m driving out here, and I had it all teed up. It’s about a 25-hour drive, but after about 22 hours you’re getting tired, and you’re thinking I might have made really good time—I might be getting there soon. Especially when you’re out by Indio on the I-10 West and you see an exit for Sunset Drive.

I didn’t know this yet! I’ve been waiting with my Doors album to play “L.A. Woman” on approach to L.A. I put that disc in there and just start jamming to [it] because there’s Sunset Drive, baby! It’s gotta be right over the next hill—I’m going to see the bright lights. Well, I played “L.A. Woman” about 47 times because it was another two hours. I took the 10 all the way to PCH, till it turned north, pulled up to [Dazed and Confused casting director] Don Phillips’s house on a Saturday night at about 10:36 p.m. Slept on his couch. That was my arrival.

Which bars did you like to go to at that time?

Well, I had my [Dazed and Confused] buddies Rory Cochrane and Cole Hauser here, and we would hit up the Formosa Cafe and Chez Jay in Santa Monica—classic little bar right there on Ocean Avenue.

Who are some of your drinking buddies when you come into town these days?

I still like to go have a drink with Cochrane and Hauser.

Which neighborhood here most resonates with you these days?

L.A.’s got so many diverse little experience pods in it. I’ve got friends in Silver Lake—that’s a different sort of walking, hipster experience. Culver City’s a great area to walk around in. But I’ve always really enjoyed Sunset Boulevard [he bangs on the table between the “Sun” and “set” syllables for emphasis]. I moved into the Chateau [Marmont] for a couple of years. Yes, sir. And I met my wife [model Camila Alves] in Hyde on Sunset. When I saw this turquoise vision moving across the room, I didn’t say, “Who is that?” I said, “What was that?” Fifteen years later … that’s that.

You don’t seem to be a fan of sequels. But out of all the characters you’ve portrayed, whose story do you think remains somewhat incomplete—whose story would you consider extending?

I didn’t get on board with Magic Mike XXL for an extension of Dallas [the character he played in the first movie]. I thought he lived where he lived. But Mick Haller in The Lincoln Lawyer—there could be a lot more to tell about him. And we’ve talked about it, if we could get the script right. That could be a revisit.

[Dazed and Confused writer-director Richard] Linklater and I have continuously chatted about what Wooderson’s up to today. I think he’s probably had that conversation with a lot of characters from Dazed. But until an idea—if ever—came up for a follow-up on what all those people are doing … probably just leave that one where it lies ’cause it’s a classic. It’s fun to imagine [what’s happened to] all of the characters I’ve played. I bet Wooderson’s got triplets—red-haired triplets.

You famously formed a friendship with Snoop Dogg on the set of The Beach Bum. Do you two still stay in touch?

Yeah, absolutely. He’ll check in. He loves FaceTime. (Laughs) It’ll just be a quick pop. Brrropp, “What’s up? See ya later.” But he’s a saint of a man. He’s really found his frequency. He’s always looking on the upside of any situation; [he] cares and is conscientious. He’s got a great story of how he got to where he was, and he knows the exact times he was taking a risk, but he made them for the right [reason] to preserve himself and his family. Great man.

You’re also friends with another celebrated stoner, Woody Harrelson. Who could outsmoke the other?

Oh, geez. It’s funny. I don’t think they’ve ever hung out—which is odd—I need to bring them together in some way. Wood’s not smoking right now, I don’t think. With Snoop it’s just like drinking water. It’s just an extension of the arm.

Did you ever think you’d live long enough to see legalized cannabis?

Not in Texas. And it ain’t legal there yet.

You might not live long enough to see that.

In The Gentlemen, you play a cannabis kingpin. What was it that attracted you to the role?

Guy Ritchie’s script. Like Lock, Stock and Two Smoking Barrels and Snatch, it’s a gangsterish comedy with size and scope. Ritchie has a real identity with that type of film, and it’s that type of script.

Out of all the wild and crazy characters you’ve played in your life, which matches most authentically with who you are as a human being?

Oh, man. I mean, look—all of ’em are some part of me. Like an old lady’s equalizer, I just raise the EQ on certain parts of me and lower the other parts and find the balance that’s in me for that character. Turn up the volume a little on some, bring down the kilohertz on a little of the others.

Come on. Even if you gotta do it 47 times, baby. You show up, keep driving west—go until you get wet.