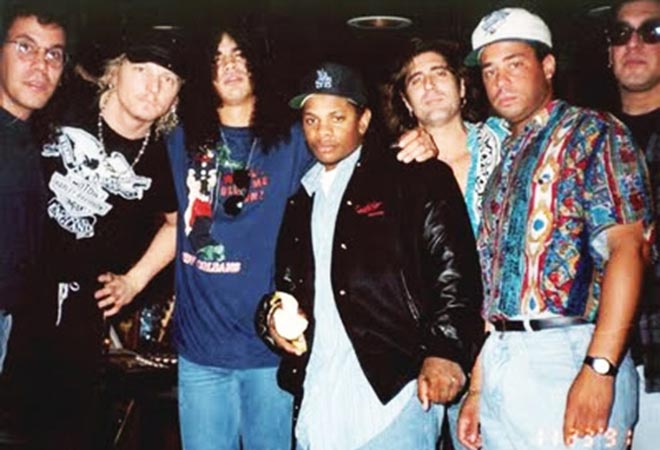 The Backstory
People talk about how dangerous New York was in the ’70s, but does anyone remember Los Angeles in the ’80s? After behaving itself for the brief triumph of the 1984 Olympics, the city seemed to go through a decade-long spasm of psychosis: freeway shootings, the Night Stalker, the crack cocaine epidemic, the L.A. Raiders, the Menendez Murders, the dark reign of LAPD chief Daryl Gates (and his favorite toy, the Batterram), young men in blue and red machine-gunning each other in the ‘hood. It all culminated at the beginning of the next decade with the grand dystopian spectacle of looting, beating, and burning that was the 1992 Rodney King riots.

Who better to provide the soundtrack to this living Mad Max film than two bands with massive chips on their shoulders hailing from both sides of the I-10? For a time, no one conveyed the foreboding L.A. nightscape with more brutal panache than a heavy-metal rock outfit from the Sunset Strip and a quintet of black-and-gold clad rappers from Compton.

Guns N’ Roses and N.W.A. both rose from the ashes of groups that were far more glammy: GN’R’s previous incarnations included hair-metal outfits Hollywood Rose, L.A. Guns, and Roadcrew; N.W.A.’s Andre “Dr. Dre” Young and Antoine “DJ Yella” Carraby came from party-hardy electrofunk outfit the World Class Wreckin’ Cru. Both groups grew out of the nuclei of longtime friendships. Dr. Dre and Eric “Eazy E” Wright were chums from childhood; GN’R’s lead singer William “Axl Rose” Bailey and rhythm guitarist Jeffrey “Izzy Stradlin” Isbell attended high school together in Lafayette, Indiana before relocating to L.A., while lead guitarist Saul “Slash” Hudson and drummer Steven Adler knew each other from Hollywood’s Bancroft Junior High School. Both had volatile frontmen who were on the dodge from the law even before they were famous. N.W.A.’s visionary kingpin Eazy-E made the $250,000 seed money for his label Ruthless Records working as a weed dealer; Axl Rose had to crash on friends’ couches for short spell because the LAPD thought he was a drug dealer.

Volatility and confrontation was the key to these two bands, but N.W.A. came from a place where the stakes were higher (3,000 gang killings between 1980 and 1989) than a bunch of hard-partying, groupie-shagging white boys in assless leather chaps and military hats. (An early GN’R flyer that screamed “They’re living fast and they’ll die young!” might have been more appropriate for a band whose full name was “Niggaz Wit Attitudes.”) The bands’ sounds, personae, and worldviews were born of trauma. Eazy-E and the other members of N.W.A. lost friends and family during the Crack Wars of the ’80s. Aside from the dysfunctional upbringings of his bandmates, Axl Rose had a particularly dark childhood: his biological father, who Rose claimed molested him when he was two years old, was murdered in 1984.

Both groups openly and joyously trashed other bands. During GN’R’s club years, Axl Rose would dedicate “Nice Boys Don’t Play Rock N’ Roll” to their nemesis, hair-metal outfit Poison. N.W.A.’s scowling lyricist O’Shea “Ice Cube” Jackson noted in an interview with the L.A. Weekly‘s Jonathan Gold that the politically charged New York rappers Public Enemy carried only plastic guns onstage. Both Rose and Eazy-E didn’t think twice about throwing punches in public. Both engaged in ugly public bitchfests with their bandmates after their ranks dissolved. And both demonstrated disquietingly honest views in their lyrics on the subjects of death, drugs, homosexuality, cops, race (both used the “n” word in their lyrics) and, uh, “bitches.”

Why You Should Listen
Appetite For Destruction and Straight Outta Compton were so full of ruthless, in-your-face attitude that they obscured the pop sensibilities of both groups, neither of whom made it a secret that they wanted to break big and get paid in the process. When they weren’t trying to be surly and sinister, N.W.A. could be pretty funny. Eazy-E’s irritating, ant-size voice sounded positively vaudevillian rapping lines like “I’m the type of nigga that’s built to last/If you fuck with me, I’ll put my foot in your ass.” Dr. Dre’s inherent diplomacy made an uplifting song like “Express Yourself,” with its bromantic lyrics and references to Buddhism, appear like a desert mirage near the album’s halfway mark.

The same applies to GN’R. When they weren’t bringing you to your sha-na-na-knees singing about heroin (“Mr. Brownstone”) or debauchery (“Welcome to the Jungle,” “Nighttrain”), the group revealed a melodic and contemplative side, seen in the twin classics “Paradise City” and “Sweet Child O’ Mine.” On both records, Slash and Dr. Dre would reveal their golden touches with sonics. Slash’s guitar could soar like a trident then blister and cut like a wound, and the band’s bottom-heavy double-guitar whirlwind still crushes eardrums under its studded boot. Dre’s and DJ Yella’s production sense mixed cheapo thwacky beats with choice cut-and-pastes of ’70s soul samples (James Brown, Funkadelic, Marvin Gaye), live instrumentation, and a slo-mo, surround-sound sensibility that would come to full flower during Dre’s career as a solo artist and kingmaking producer.

If anything, it is enlightening to listen to both records now and think, Wow, this sounds pretty tame. Chew on that one for a while.

The Aftermath
Released a year apart, N.W.A. and GN’R’s full-length debuts supplied tantalizing fantasies of urban sleaze and violence to millions of white suburban teens. The groups’ chaotic and sexually charged live shows brought the unhinged street life of L.A. to the masses. GN’R had strippers dance during performances of “Rocket Queen.” During live renditions of “Dopeman” N.W.A. would pull laughing women on stage to be group-humped. It was enough to make a Midwestern city elder keel over in foamy apoplexy.

In the media, both bands were often lumped together as harbringers of a new shock-based culture. To whit, The Guardian‘s Mark Cooper in 1989: “Like hard rockers Guns N’ Roses or such emerging standup comedians as Andrew ‘Dice’ Clay and Sam Kinison, N.W.A. make no attempt to blunt or transcend the savagery of their milieu or to change it. In fact, they appear to revel in it.”

Musically, GN’R and N.W.A. were game changers. GN’R caused a thousand mascaraed and Aqua Netted metal bands to shift to ripped denim and Concha belts. (Even Poison would drop the onstage Silly String fights and adopt GN’R’s gutter-cowboy aesthetic.) N.W.A. ensured that anyone in a Kangol hat and sparkly pants rapping about partyin’ and gettin’ girls would immediately be shamed to the back of the room. Even MC Hammer would assist in the wrecking of his own career by trying to turn “gangsta.”

This being the era of Ronald Reagan and the Moral Majority, you could almost chart a timetable for the ensuing backlash. Appetite For Destruction encountered controversy from retailers even before it hit shelves, forcing Geffen Records to replace the album’s cyber-rapey, ZAP Comix-influenced cover art. (True to form, Rose originally wanted a 1985 photo of the Space Shuttle Challenger exploding in midair.) In March 1989, MTV banned N.W.A.’s “Straight Outta Compton” video from its rotation for its supposedly provocative depiction of an LAPD gang sweep. (Fun fact: The video was directed by a white Englishman named Rupert Wainwright, who was somewhat unnerved during the shoot when he noticed Eazy-E wearing a bulletproof vest under his jacket.)

It was only the beginning, and N.W.A. undoubtedly paid the heavier price. Their monumental and comic cuss-out, “Fuck Tha Police,” drew the ire of the FBI and police departments in Toledo, Cincinnati, and Detroit. In the Motor City, they were informed by officers: “We just wanted to show the kids that you can’t say ‘Fuck the police’ in Detroit.”

All of this controversy meant more records were sold, something self-appointed arbiters of moral outrage still don’t seem to comprehend. Although it took nearly a year, Appetite For Destruction finally topped the Billboard Album Charts on August 7, 1988, one day before Straight Outta Compton was released. “We thought we were so badass,” Axl Rose told New York magazine in 2006. “Then N.W.A. came out rapping about this world where you walk out of your house and you get shot. It was just so clear what stupid little white-boy poseurs we were. It was like, ‘All right, we can give up the act.’ If you’re talking about which lifestyle is more hardcore, the one where you get shot always wins.” Rose even started wearing an N.W.A. cap in videos and live performances. “The biggest shock was when we saw Axl Rose in the video with the N.W.A. hat,” remembered Dr. Dre in 2007. “We were like, ‘What the fuck?’ We were still selling records out of our car.”

That would soon change. Straight Outta Compton sold more than two million copies on a $12,000 investment, becoming the first album to go double platinum with no airplay and no major tour support. Soon, GN’R and N.W.A. began kicking it together and bonding at barbecues. “I became friends with Dr. Dre, Eazy-E, and Ice Cube from N.W.A.,” GN’R’s bassist Michael “Duff” McKagan remembered in his autobiography It’s So Easy and Other Lies. “I had seen the sensationalized reaction Guns got by presenting an unedited look at our lives on Appetite. And white boys in Hollywood weren’t exactly a marginalized group. The glimpse of street life presented by N.W.A….was a true shock to the system. Those guys lived hard too and we had some great parties up at my house.”

As the ’80s wound down, the volatility that earned them such massive (and unexpected) success spelled the end for N.W.A. and GN’R. After an acrimonious split over royalties, Ice Cube left N.W.A. in 1989. Undaunted, N.W.A. released Efil4zaggin in 1991 (which contains a song titled “Appetite For Destruction”). Aside from Dr. Dre’s blossoming producing talents, it’s arguably the worst rap album ever to debut at #2 on the Billboard charts. Eazy-E alienated a good portion of N.W.A.’s fanbase by burying the hatchet (sort of) with LAPD chief Daryl Gates and showing up at a Republican fundraising luncheon hosted by George H.W. Bush. Apparently, Eazy liked the way #41 handled the first Iraq war.

Thanks to the rise of grunge and its emphasis lo-fi authenticity, GN’R increasingly looked increasingly like out of touch divas. (Try listening to GN’R’s “November Rain” from their bloated Use Your Illusion project next to Nirvana’s “Aneurysm.”) Hobbled by lingering controversy over lyrical content and Rose’s onstage meltdowns, GN’R tried to out-badass everyone by recording punk-rock songs for their 1994 covers album “The Spaghetti Incident?” Despite the reservations of his bandmates, Rose insisted on including a song penned by Charles Manson as a hidden track; Geffen wound up paying out $62,000 for every million copies sold to the son of Manson victim Voytek Frykowski. Citing Rose’s “dictatorship” of the band, Slash left in 1996. Rose held onto the Guns N’ Roses name for 12 years, when he and a new lineup released the tepidly received Chinese Democracy.

Interestingly, the same year that Efil4zaggin and Use Your Illusion were released, Eazy-E and GN’R allegedly recorded a track together, “The Yellow Road of Compton,” but it was never released. Eazy-E died of AIDS in 1995 at age 31. He is buried at Rose Hills Memorial Park in Whittier.