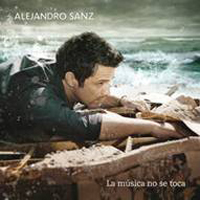 When two planes struck the twin towers of the World Trade Center Sep. 11, 2001, probably the last thing on anyone’s mind was the second annual Latin Grammys ceremony, scheduled to take place that night at L.A.’s Shrine Auditorium. The show was cancelled, and with it, the planned performance by Sanz, a Spanish singer-songwriter who has recorded with Alicia Keys, Shakira, and Tony Bennett.

Sanz ended up taking home four awards when the winners were announced at an October press conference, but what to do with the guitar he was supposed to strum that night? The axe, which Sanz later used to accompany Destiny’s Child during a performance of “Quisiera Ser” at the 2002 Grammys, will find a final resting place at the Grammy Museum.

Councilwoman Jan Perry of the 9th District will oversee today’s presentation and bestow the honor on Sanz just before his stateside tour, “La Música no se Toca 2013” (translated roughly to mean “music is not to be touched or trifled with”), kicks off at the Nokia Theatre on Wednesday night.

A 16-time Latin Grammy winner with three more Grammy awards to boot, Sanz has already earned 17 gold and platinum awards for his latest album, which debuted in September. Want to join his formidable fanbase? Extend your observance of Sanz Day and snap up tickets to his Nokia gig.