Home Uncategorized Mark Ryden: Midnight in the Garden of Kitsch 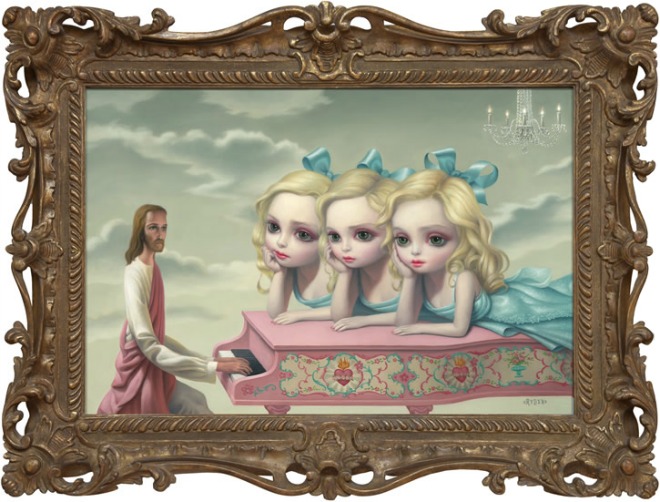 To those unfamiliar with Mark Ryden — an artist with the painstaking eye of an Old Master and a baroque passion for detail — the motifs of his work read like a checklist of oddities: Abraham Lincoln, Jesus, raw meat, Bambi-eyed nymphs weeping tears of blood, and even the occasional cameo by Christina Ricci, Jimi Hendrix, or Sarah Michelle Gellar.

Taschen recently came out with a relatively affordable trade edition of his book Pinxit. Titled after the Latin for “painted by,” it’s a gorgeous blush-colored book filled with images created by the pioneer of Pop Surrealism. We met up with him to ask: Why girls? Why meat? Why L.A.?

Your female figures are very beautiful, very mature looking, with arrestingly adult gazes. Do you ever fall in love with them?
I think if an artist wants their work to have power and vitality, you have to “fall in love” with what you are working on. Without that love, the work can become lifeless and soulless.

Although you started in commercial illustration, your style is very painterly with traces of Bosch, Vermeer, Manet, Dali, and Pop art. Who were your most powerful influences early on?
I suppose it depends on how early on you are talking about! When I was a teenager I liked Magritte, Rosenquist, and Bosch. During my collage years I discovered a love of other early Flemish Masters like Van Eyck. At this time, I also became quite fond of David and Ingres and this influenced my work quite a bit.

Although contemporary artists often stray away from the image, your paintings are chock full of them. How do you want the viewer to engage with one of your paintings?
I would hope my work engages the viewer’s heart as well as their mind. I hope my work captures some of the mystery and beauty of the world around us.

Raw meat features prominently in your work, and you’ve said many people are surprised to learn that you’re not a vegetarian. Is this imagery a political or an aesthetic one?
My use of the imagery of meat is primarily spiritual in nature. Meat is the physical substance that keeps our non-physical souls in this reality. Politically, I am not against the consumption of meat. I do feel we should treat the animals we eat with care and respect and thank them for providing us with a meal. I think it is horrible the way we treat our animals that are destined to become food. We practically torture them before a brutal slaughtering. It does not have to be that way.

We recently interviewed your friend Gary Baseman for his first retrospective at the Skirball. I noticed you have some similar iconography — fuzzy, lovable creatures oozing liquids from their belly buttons. Is there some cross-pollination there?
When Gary’s belly button starts to ooze liquid I try not to get any on me, but sometimes you just can’t avoid it.

You’ve done a lot with the Gay ’90s, a time period you’ve said embodies our fascination with kitsch. What do you think kitsch tells us about ourselves?
Kitsch can put on display the archetypes of the collective unconscious. Kitsch can reveal what images have resonance in all of our souls. The imagery of Kitsch is the imagery of the collective imagination.

You’ve talked about how your work reflects mysticism and magic in the human psyche, and how those values are often sneered at in contemporary culture. How do you replenish those needs in your own life, apart from your art?
You have to see the world as the magical and mystical place that it is. Sometimes this comes automatically, but sometimes you have to consciously make an effort see enchantment in the world around you. It is important to regularly take time specifically for rejuvenating your soul and nurturing your artist self. For me it’s a leisurely walk through the Huntington Gardens or a quiet visit to the Getty Villa.

How does Los Angeles feed your creative life? Do you think you would paint the same images if you lived somewhere else, like New York?
I feel like Los Angels is more open to a variety of attitudes about art in general. I feel free here to do what I do. New York has it’s own flavor of vitality, but for the work that I do I think New York might be too constricting. The environment an artist lives in will definitely influence them and their work and I find Los Angeles a good place of support for me.

Get to Know the L.A.-Born Artist Who Created Barack Obama’s Official Portrait