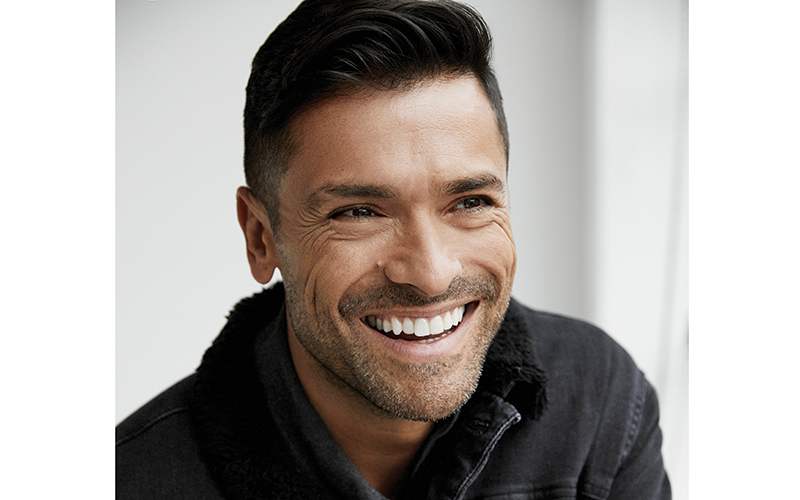 Mark Consuelos knows a hit soap opera when he sees one. The 47-year-old actor spent seven years portraying Pine Valley heartthrob Mateo Santos on ABC’s All My Children, where he rose to stardom alongside his now-wife, Kelly Ripa. In the years since, Consuelos has maintained a consistent TV presence—Alpha House, Pitch, American Horror Story—but he seems most at home on a nouveau soap: the CW’s Riverdale (season three premieres October 10).

Based on the old Archie comics, the grim series is crammed with story lines so bananas (serial killers! biker gangs! conversion therapy!) that they make Pine Valley look like Sesame Street. Consuelos contributes to the chaos as Hiram Lodge, a mafioso and real estate tycoon with hidden agendas aplenty. “I’ve played some nefarious guys,” Consuelos says, “but never a sociopath like Hiram. He’s a villain of the darkest order.”

When Consuelos isn’t busy framing teenagers for murder, he can be found dropping in on Ripa’s Live with Kelly and Ryan or leaving quips on various Instagram accounts (frequently documented by the expert sleuths at @commentsbycelebs). We caught up with him to talk mafia monikers and Kris Jenner.

L.A.-themed mob boss name?
Something with “tan,” like “the Tan Takedown.”

Celeb you’d anonymously troll on Instagram for a day?
David Beckham. I would hate to troll him, though, so I would anonymously fanboy. I don’t even want to comment anonymously because it’d be amazing to have him answer.

Three Angelenos, dead or alive, you’d cast in an All My Children reboot?
The Sprouse twins would play one evil character. I know they’re in their twenties, but I’d make them play a seven-year-old. Then Elizabeth Taylor, who would be my side piece. And Erik Estrada, who’d be my estranged cousin.

Song that would play during a musical montage of your life?
“La Bamba” or “Despacito.” Or a “La Bamba”/ “Despacito” mash-up.

Riverdale character—besides Hiram—you’d dress up as on the Walk of Fame?
Jughead during the day because I covet those Southside Serpents jackets, and then at night I’d slide into Cheryl’s archery getup.

You’re a baseball fan. Three other TV villains you’d recruit for a team?
Camila Vargas from Queen of the South—she’d be the manager. J.R. Ewing from Dallas would be a catcher. And Negan from The Walking Dead would be a cleanup hitter because he’s always carrying a club.

Local royal family the Lodges would roll with if they moved to L.A.?
Obviously the Kardashians. Hermione Lodge basically is Kris Jenner.

Kelly thinks you’re narcoleptic. Most embarrassing L.A. spot where you’ve snoozed?
The Hollywood Bowl, watching Dolly Parton. And I love Dolly Parton. You know what? I’m changing my mob boss name to Big Narcoleptic. And I mean that with all due respect to my fellow narcoleptics.

RELATED: The 13 Best Things to Do in L.A. in October