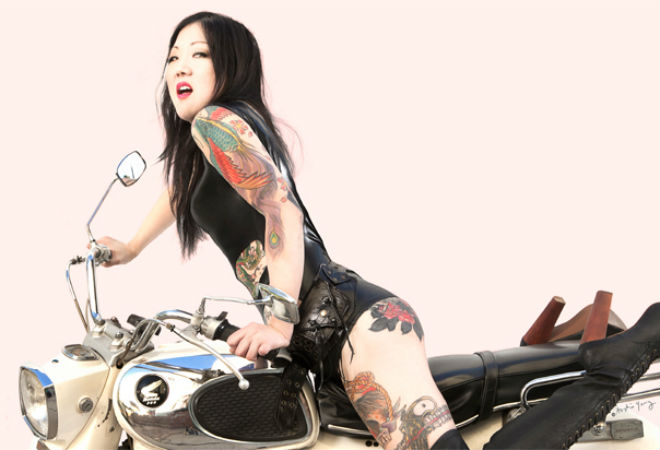 Margaret Cho’s versatile oeuvre—best known as a comedian, she has also acted in television and film, recorded music, and written two books—is united by an exploration of social issues like sexism and homophobia. Her monologues investigate issues of race, gender, and sexuality from an intelligent, iconoclastic, and raunchy viewpoint that’s always thoughtful. Her dedication to these topics has made her a figurehead in the gay rights movement. In her new live show, Mother, Cho examines her role within the overlapping worlds of pop culture and social commentary while paying homage to her mom. Cho performs at The Wiltern on December 6.

What is Mother about?
Mother is about a few things. Mother is an identity I have grown into. If you hang around gay men a lot you become a kind of mother figure. I also have a lot of younger friends. There’s a certain grandeur that comes with age, and I talk about that in the show. I also talk a lot about my own mother. It’s not necessarily about being a mother but about assuming that role as you get older. I use that as a jumping off point for a lot of different jokes. I talk a lot about sexuality and race, issues of which I feel I have reached a certain mastery. I’m really proud of the material.

What inspired you to do this show?
I wanted to get back to standup comedy. I do a lot of different things. I’m an actor. I do a little bit of music. I’ve been doing standup for a long time. It’s the art form I’m most comfortable with. This show is a chance for me to revel in it. I’ve been doing [standup] since I was teenager. It’s all I ever thought I would do. As a kid, I never saw Asian people on TV or in movies, so I never thought that was possible. I realized I could forge my own path in comedy. It still holds that promise.

Do you have any favorite parts from the show?
I love talking about my own mother. I love her observations about modern life and pop culture. I do a bit based on my mother’s reaction to Miley Cyrus. I love that weird immigrant take on something that is so modern America. But a big part of this show is really about me exploring my own identity as this grand dame or mother figure to my friends. That perspective is new. A lot of my material is focused on how the world is changing and has changed. In the gay world a lot of things are happening. Gay marriage is being legalized in more places. There’s a whole new attitude to gay rights, which is an exciting thing to explore.

What’s it like to talk about profound issues in a comedy setting?
I think it’s easy. The more you have at stake as a person, the more value it has as comedy. There’s a certain amount of risk-taking in society, as a comedian, and if you’re willing to go to those lengths, it’s really rewarding. Standup comedy is also an art form where the older you are, the better you get at it, which is not true in other arenas. For some reason, in standup comedy maturity is a real asset. It’s almost the opposite of being an ingénue or a model. The more comfort you have with yourself and issues that may be difficult to talk about, the more you have to give and offer an audience. It’s a really rewarding experience.

Is your work explicitly political?
I used to encounter a lot of weird homophobic attitudes in comedy. But the world of comedy has really changed, and that’s almost taboo today. I love that. I always felt a little bit like an outsider, but the shift in attitude towards the LGBT community is really clear. Because of who I am, I think my work is implicitly political. I’m an Asian American woman. I’m queer. I’m very outspoken about politics. But at the same time I don’t ever want to lose sight of being an entertainer. You have to balance it.

One of your most popular characters is based on your mother. Why do you think that resonates with audiences?
I think it’s because it’s the voice of my Asian-ness and whatever is still foreign about me. People relate to this very open and honest kind of character. I’ve always enjoyed doing that character and it’s been very easy to do. People understand it, regardless of their ethnic background. It provides an outsider perspective on what’s going on inside. My mother loves it. And it’s very real too. It’s pretty dead on. A lot of women in my family have become invisible, as they’ve gotten older. My mother loves the fact that it pushes her into the spotlight. It shows that you can grow old and not disappear into the background, which unfortunately is a feeling a lot of Asian women are left with as they get older.

Does your mother ever make suggestions for what you should include in your act?
All the time. It never really works out but it’s very sweet. It’s really more the things that I notice about her that work out in my material.

You’ve performed abroad with the show. How does your material translate overseas?
I feel like Josephine Baker when I’m in Europe. I feel very exotic. They see me first and foremost as an American, which is really cool. It’s funny when you see yourself in a particular way and then you find out that people see you differently. I see myself as Asian American, but in Europe I’m just an American. It’s always very exciting to work there. You realize how different your opinions and experiences are and people have this really exotic idea of who you are as an American.

You recently appeared in the music video for Dorian Wood’s “La Cara Infinita.” How did that collaboration come about?
I was visiting my friend Sebastian Steinberg, who plays bass in Dorian’s band, while they were making the video. I’ve discussed collaborating with Dorian Wood before; when they told me about what they wanted to do, I was sold. The concept is inspired by the Pasolini film Salò, or The 120 Days of Sodom, and I’d never seen that referenced in pop culture before. I was really impressed by that. I just hang out naked in the video. I’m very comfortable with my body and being nude. People don’t know what to do with the image of the human body when it’s not either sexualized or used to sell something. Working with notions like that is real art. I’ve always worked with body image in my comedy, so I was really excited about being in the video. People experience such pain and suffering connected to body image. If you can alleviate that a little bit through your art, it’s a really beautiful thing. And I love the song too.