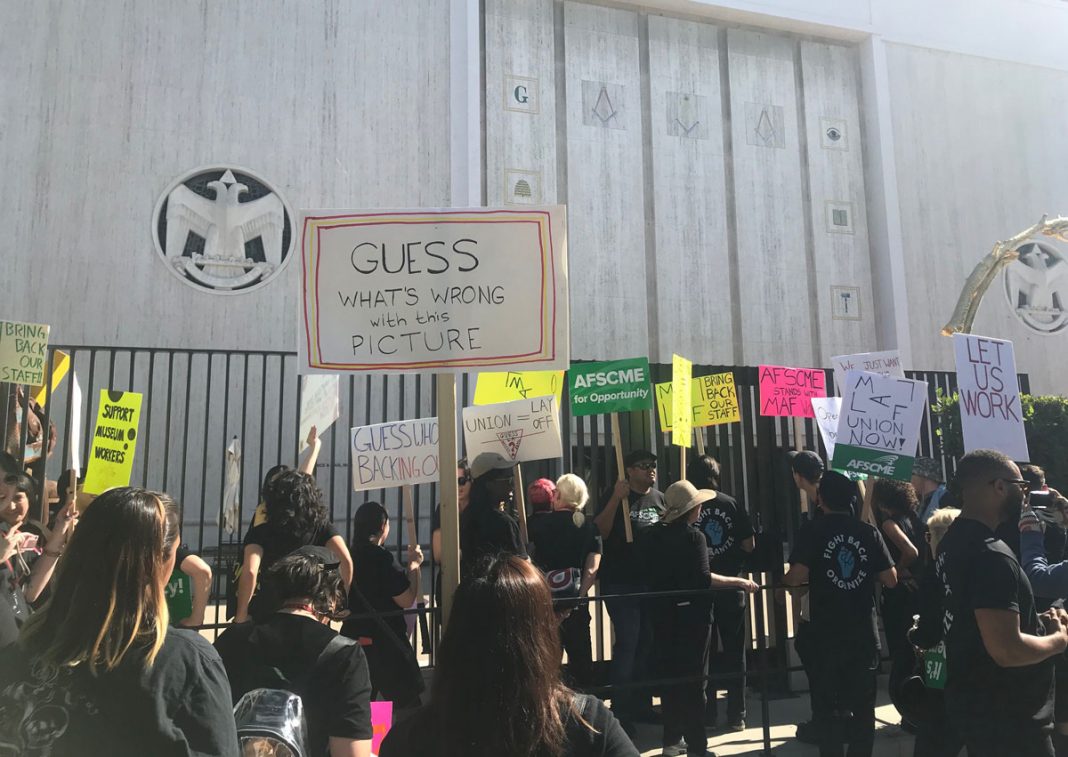 The parking lot of the recently shuttered Marciano Art Foundation was deserted on Friday morning, but 60 or so of the museum’s former employees still gathered outside of the building at around 11 a.m., just in time to work an opening shift.

Dressed in all black with red MAF name tag lanyards, the workers—who were laid off suddenly on Tuesday night, just days after announcing their intention to unionize—stood outside the former Masonic lodge’s locked gates, wielding picket signs and asking the stoic security guards posted up in the courtyard to let them in.

Picketer James Barnes said he wasn’t holding out hope that the protest would result in him being able to return to work. Instead, he and his fellow demonstrators sought to draw attention to their sudden termination—which they suspect was in retaliation for the unionization push—and to highlight unfair conditions and pay disparities in the art world at large. “I hope that we can make a statement that this isn’t right,” Barnes said. “And that other institutions, which I think are going to face similar issues, should make better decisions.”

Last Friday, the museum’s six dozen “Visitors Services Associates,” who were tasked with overseeing galleries and educating visitors, announced that they were forming a union to negotiate about issues surrounding scheduling, low wages, family leave, and job security. On Tuesday, they received an email informing them that the museum had indefinitely shuttered due to low attendance, and that they would all be terminated.

A post on the museum union’s Instagram called the move a “gross obstruction of workers rights.” On Thursday, workers filed an unfair labor practice charge withe the National Labor Relations Board, and the foundation is currently under investigation.

Opened in 2017 by brothers brothers Paul and Maurice Marciano, who made their fortunes as founders of the clothing label Guess, the nonprofit museum exhibited both the brothers’ substantial contemporary art collection and traveling exhibitions. Its sudden closure has sparked conversations in the art world about the role of so-called “vanity museums,” which allow wealthy collectors to get tax breaks for displaying their art while the pieces continue to get more valuable.

It has also played into an ongoing discussion about labor issues and pay gaps in the art world, where wage disparity is particularly egregious.

Standing outside her former workplace on Friday, picketer Bristol Hayward-Hughes teared up speaking about the loss of the institution and the disrespectful treatment of her fellow employees. She said she loved her job doing children’s education at the museum, and was proud to have worked there for over a year. “These are my friends, my family,” she said.

Hayward-Hughes said that despite everything, the shuttering of a free institution that showcases contemporary art is a “huge loss to the community,” and hopes that in the wake of this Angelenos will continue to engage with work in local galleries that more directly support creators. “If you love the artwork, go to the places where artists actually make the money,” she said. “[The Marcianos] are not really supporting these artists, they buy the work on secondary sales. It’s all about making sure their art accrues value.”