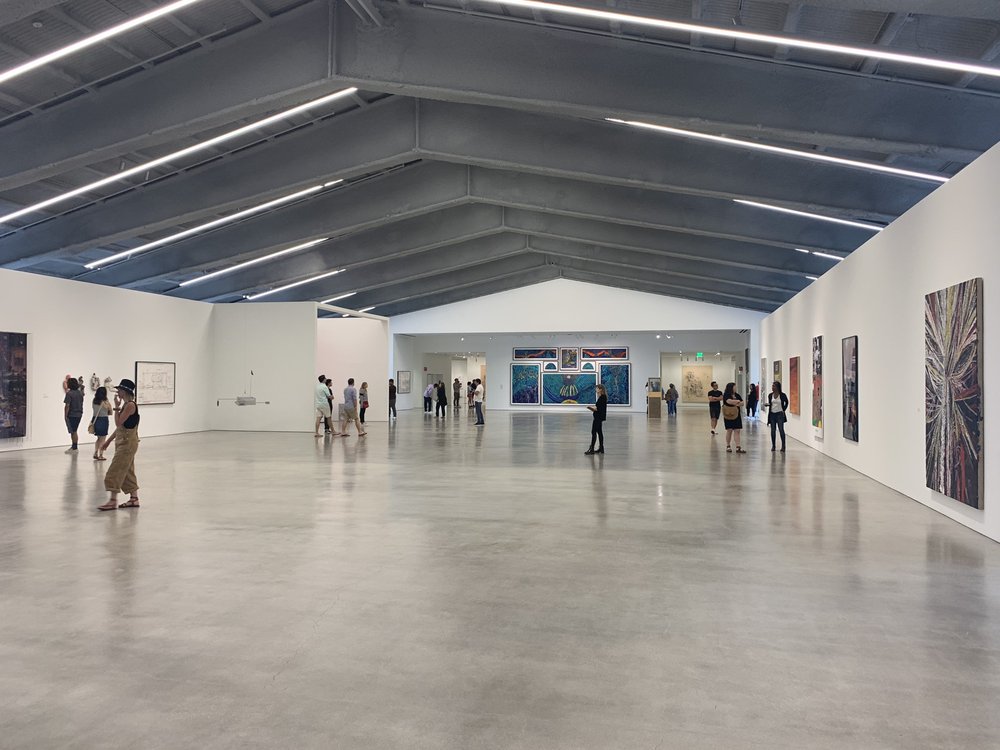 The statement reads: “The Marciano Art Foundation started as a vision to create a space of freedom, creativity and education for artists and the public. The Foundation’s only goal was to give back to Greater Los Angeles by fostering an appreciation of the arts accessible to everyone and free to the public. We are grateful to the public and the art community for their enthusiastic support of this ambitious project and all that we have accomplished during the past two and a half years. It was truly fulfilling to see thousands of visitors enjoy the exhibitions we had the good fortune of putting together with such inspiring artists. Maurice and Paul Marciano will continue to support and encourage artists and curators internationally in their creative endeavors.”

On Tuesday night, employees of the Marciano Art Foundation received a brief email with some surprising news. Effective Thursday, the email read, all 70 visitor-facing staff members would be laid off, and the museum would shutter indefinitely.

“Due to low attendance the past few weeks, Marciano Art Foundation will be closing the current exhibitions early on November 6 after a five month run. We have no present plans to reopen,” a museum representative emailed in response to a Los Angeles request for comment.

The museum’s now-former employees, however, assert that the reason for the mass layoffs has little to do with attendance numbers at the museum. Rather, they say, it appears to be direct retaliation for the announcement late last week that the visitor services associates had initiated the process of forming a union, in affiliation with the American Federation of State, County, and Municipal Employees.

“They had been experiencing low attendance, but that was something that was happening for months,” says Eli Petzold, a leader of the organizing committee that helped launch the M.A.F. union drive. “In spite of that, they had been planning Frieze Week, they were in the middle of this rehang, they just installed a whole new room of Alex Israel stuff, they were preparing for the future. They hadn’t formally announced the next Theater Gallery show, which would open in February, but they were actively collecting drawings for that. They were in the middle of stuff. There’s no way that this sudden turn of events could be just because of ‘low attendance.’”

“They were in the middle of stuff. There’s no way that this sudden turn of events could be just because of ‘low attendance.’”

The layoffs announced last night appear to impact only the job functions that would have been included in the union. Curators, for example, would not be part of the union, and were not included in the immediate layoff announcement, in spite of the museum’s apparent closure.

Workers at the museum were motivated to launch their union drive after months of requests to discuss changes from wages to working conditions were, according to Petzold, “stonewalled” by management. Staffers were paid minimum wage, stood for hours, and were subjected to irregular work schedules. Even small requests were denied by leadership.

“For example, it’s a huge building, and the only place staff could get water was in the basement. We were only given ten-minute breaks. If you were on the third floor and just needed water, you would need someone to cover you in order to run all the way down the stairs. There was a place where they could have put water for staff on the third floor, but they wouldn’t,” Petzold explains.

The work was specialized, creative, and required an understanding of art and the ability to communicate with visitors.

“We all enjoyed the work. It presented challenges and lead to all these amazing conversations,” Petzold says. “They relied on us to be the face of the museum. That’s a really interesting challenge, but that is not $14-an-hour work. It’s a job for people who are good communicators, good educators, able to process that type of information. We were all trained and qualified.”

The Marciano Art Foundation opened in 2017, offering the public an opportunity to view touring exhibitions as well as the extensive personal art collection of brothers Paul and Maurice Marciano, who built their considerable fortune as founders of the clothing company Guess. When it launched, Los Angeles Times art critic Christopher Knight described it as a “vanity art museum” and lacking in a deeply informed approach.

In time, however, the museum appeared to find its footing, installing a work by social media favorite Yayoi Kusama, and staging a blockbuster exhibition by Ai Weiwei, which brought a spike of traffic to the museum. But when the show closed, the crowds died back down.

“Maurice came into the Foundation one day and saw a small number of visitors, but a lot of us posted where we were meant to be. He didn’t like that. That visit lead to a bunch of shift cuts and them changing where we were posted around the galleries,” Petzold says.

“People quaked. Every time we knew that a Marciano was coming in, supervisors would scramble to make things look whatever way they thought he wanted it to look”

“People quaked. Every time we knew that a Marciano was coming in, supervisors would scramble to make things look whatever way they thought he wanted it to look,” Petzold recalls, describing a culture of fear around the founders and their ultimate control over the institution. “Things we were asking for could be quite basic, and people in management could be sympathetic, but they would pass them up [to Marciano] and be told, ‘No, that’s not going to happen.'”

Admission to the Marciano Art Foundation has always been free, so the museum does not depend upon ticket sales for revenue. However, the number of visitors scanned in at the museum each day is still important to the institution–and the Marciano brothers themselves–under the tax code. Free museums such as the Marciano or Broad are covered by the Free Museums Exemption, but maintaining that status can depend upon reporting information including visitor numbers.

Rumblings of union organizing began at the Marciano around January, after workers at the New Museum in New York went public with their own campaign. A renewed interest in labor organizing has taken hold in art museums over the last couple of years, in part due to the work of an organization known as Art + Museum Transparency.

The group began with the circulation of a Google spreadsheet where workers in the field could anonymously report their compensation, an idea borrowed from a similar project advocating for adjunct professors at universities in 2012. Art + Museum Transparency’s spreadsheet soon contained thousands of data points covering a diverse assortment of institutions and job functions. Across the data, trends emerged: low wages, inequity, and a sense that institutions that are intended for the good of the public were not doing well by their own employees.

“These institutions exploit their staffs and claim they are doing them a favor. It is disgusting and at a breaking point.”

“The entire field is built on depressed wages and uncomfortable working conditions, rife with improper contact between donors and staff and also physically unsafe working conditions,” a representative for Art + Museum Transparency said. “These institutions exploit their staffs and claim they are doing them a favor. It is disgusting and at a breaking point.”

While Art + Museum Transparency was not directly involved in the Marciano union campaign, the group has supported other recent museum union drives and was tracking developments. While the group says they believe the conditions and concerns that motivated the Marciano workers to organize are consistent with institutions where unions have effectively been established, a spokesperson notes that the Marciano’s small size, heavy reliance on part-time workers, and concentration of ultimate power in top management may have been factors in why things played out so differently here.

Now the former Marciano Art Foundation workers are examining their options. The National Labor Relations Act makes it illegal for any employer to interfere with labor organizing attempts. “We have a meeting with the union coming up,” Petzold says. “It was scheduled before, but it’s turned from our first membership meeting into a meeting where we’re going into a war room and figuring out exactly what our legal options are.”

Petzold does not know where he or his former coworkers will go next–”It’s not like there’s 70 jobs all open at some other museum in L.A.,” he notes–but he hopes to find an institution that treats workers internally with the values that it claims to uphold publicly.

“The Foundation really wanted to be on the front lines of social, cultural, political issues. This most recent show, the one they’re closing early by Donna Huanca, was all about centering women in this traditionally male space of the Masonic Temple. We were selling things in the bookstore that were funding local charities, really good causes,” he says. “All this effort, trying to look like they were ‘doing the right thing.’ It all seems so empty when you look at the full scope of who they are and how they were running things. It’s like they don’t understand that everything is intersectional.”

RELATED: A SoCal Grocery Workers Strike Has Likely Been Averted