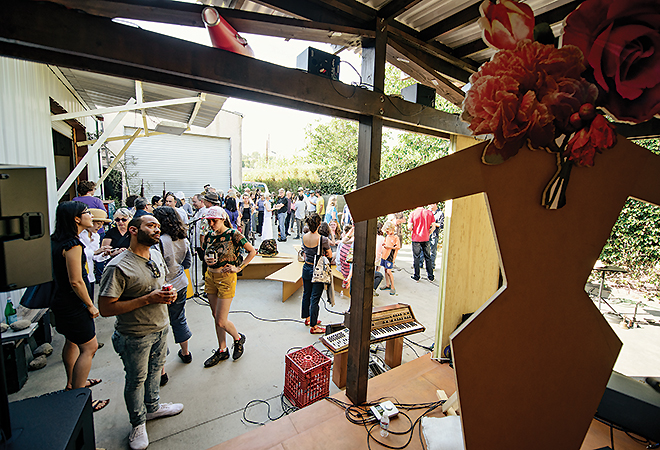 Finding the city’s namesake art museum takes initiative. Tucked away in Eagle Rock, the Los Angeles Museum of Art isn’t a believer in public signage, and it isn’t visible from the street. Not to be confused with the county museum of art—the place along the Miracle Mile with the famous thicket of lampposts and the big levitating rock—LAMOA (pronounced la-MOH-ah, because a respectable institution needs an acronym) hides behind the Filipino restaurant Fiesta Sa Barrio and is considerably smaller: just 9-by-12½ feet. In fact, when the structure’s removable walls are out of the way, its simple post-and-beam design recalls a Japanese roadside shrine, albeit one where you might find a sculptural installation, a 16mm movie projection, or an experimental sound performance.

LAMOA is the project of German-born artist Alice Könitz, and it’s among a wave of alternative—some might say edgy—micromuseums, galleries, and even-harder-to-define enterprises established around the city for and by artists. In Chinatown alone, a largely artist-run radio station named K-CHUNG operates a short distance from Human Resources, a performance art collective, and Actual Size, an artist-run gallery alongside a bric-a-brac bazaar. In nearby Highland Park, a former bodega hosts the Museum of Public Fiction, while the one-man operation known as Commonwealth & Council offers short-term residencies, studio and exhibition space, and workshops beside a K-town pub. Elephant, in Glassell Park, provides similar support out of a gray stucco rectangle that doubles as its founders’ art studios. The one-bedroom apartment space called Artist Curated Projects, based near the Paramount lot, goes one step further: Its cofounder lives there. What these ventures all have in common, aside from their DIY mind-set, is the goal of providing a venue, and perhaps a community, for artists to ply their craft in an outsize city.

If it’s a movement, you could trace its origins to Ferus Gallery. Cofounded in 1957 by artist Edward Kienholz and curator Walter Hopps in what is now West Hollywood, Ferus would be the first space on the West Coast to show Andy Warhol’s work. In the mid-’70s, a group of artists founded Los Angeles Contemporary Exhibitions downtown, featuring nascent stars like Chris Burden and Mike Kelley, before it moved to Hollywood. Back then, an artist could make a statement by staying in Los Angeles rather than joining the scene in New York because Manhattan was the art world.

But that’s changed. L.A. is a major art center now, and with so many painters, sculptors, photographers, and the like coming out of Southern California’s MFA programs (at UCLA, UCI, Art Center, CalArts, USC, Otis, et cetera), the region has far more talented artists producing work than places to show it. “A lot of these artist-run organizations spring out of those kinds of networks, which offer opportunities and contacts for artists to make work and keep moving forward, when commercial galleries and museums don’t,” says Michael Ned Holte, a Los Angeles art critic and cocurator of this year’s Made in L.A. biennial at the Hammer Museum, which includes LAMOA’s collection and three other artist organizations.

The demand for venues is partly what spurred Könitz to create LAMOA, which sits by her studio. A multimedia sculptor, Könitz would walk through the empty lot to her work space, pondering a use for it. The potential tugged at her. Eventually she pitched a project to the crowd-funding site Hatchfund. More than $5,000 in pledges and two months of construction later, LAMOA was born.

Its inaugural show was with L.A. artist Taft Green. That was in December 2012, when the endowment of the Museum of Contemporary Art had dipped to a sixth of what it is today and hopes for MOCA’s survival were dim. “I was interested in having a space where I actually could show people’s work,” says Könitz, specifically work that she’s not seeing shown anywhere else in L.A. Implicit in any artist-run operation is a jab at the art establishment—at the politics, the nepotism, the risk aversion. “As a curator,” she says with a slight accent, “I have the ability to just deal with what I like.”

Being an artist is a lonely business; there’s no lobby, no association, and no union to offer support. That’s why independent curator Chloë Flores and her construction contractor husband, Tim Lefevre, established GuestHaus Residency in 2011. Reputed to be the only self-run artist residency program of its kind in the city, it provides artists, curators, and art historians a place to focus and crash—gratis—as they work on short-term projects. GuestHaus  hosted Boston artist Jeannie Simms, along with a video screening and talk in conjunction with her exhibition at Commonwealth & Council in 2012. Paris-based curator and writer Martha Kirszenbaum came to work on a project taking place in both Paris and L.A.; she stayed three weeks, the maximum length for a residency, though it’s typical for a guest to spend only a day or two, cruising through town to attend a weekend workshop or give a lecture at a local art school.

The “haus” is essentially a 300-square-foot studio that Flores and Lefevre built high up in Mount Washington beside their home, a tiered, modernist number befitting a Dwell magazine spread. Lefevre had intended the studio as a place for visiting friends and relatives to stay, but after the couple’s home was completed in 2010, they came to realize that the guest house wasn’t being utilized. “I am not in a position to create more public space in Los Angeles,” says Flores, speaking almost in a hush, as if she doesn’t want to disturb all the depthless nature hugging the house. “But it’s interesting to me to create more ‘public’ opportunities in domestic spaces and open up the idea of how we use our homes, how we support the arts.” That includes allowing artists-in-residence to use the kitchen in her own home, since the studio doesn’t have one.

What the family receives in return are the conversations and ideas that come with having a constant stream of creative, erudite people flow through their lives. The overhead for running the program is low; the property, for instance, is solar powered. The biggest costs, says Flores, who has a master’s in public art studies from USC, are her time and labor. On top of her curatorial practice and a regular job as a hired hand helping artists make their work, she spends about 15 hours a week vetting residency applications, calling references, and setting up the schedule—probably the most time-consuming part, since she tries to fit in as many applicants as possible. What Flores wants is to be paid for running GuestHaus.

Operating a self-funded space for artists is by necessity part passion project, part endurance exercise, and having creative control often means surviving without any institutional support. That has been the challenge faced by a very different DIY endeavor in Chinatown. K-CHUNG isn’t a cute name for an artist-run gallery. It is indeed a radio station, but one that is inextricably tied to the art world. Two of the cofounders, Solomon Bothwell and Luke Fischbeck, are artists (Fischbeck is also a member of the local band Lucky Dragons). After being founded in 2011, K-CHUNG operated briefly out of the art space Public School on Chung King Road. Many of the station’s DJs are L.A. artists, but because there are musicians, writers, and other creative types on board as well, the label “artist-run” is shunned.

Bothwell, a lanky, bespectacled 28-year-old, started K-CHUNG (1630-AM on the dial), using a handheld antenna to deliver live broadcasts from house parties and art events around L.A. Then he found shelter above a pho restaurant on Broadway and secured a better transmitter, which is to say, one that can broadcast a few blocks; the bulk of the station’s growing audience listens to the online archive.

Three years later the number of shows has gone from 25 to about 70 to more than 130. With the help of a hundred or so part-time volunteers, K-CHUNG typically broadcasts four nights a week from 7 p.m. to midnight and all day Sunday. Anyone can pitch a show, online or verbally; if there’s a time slot and a station manager (essentially a mix of engineer and technical director) available for that slot, you’re in, but the shortage of volunteers has kept the waiting list long and the broadcast hours limited.

The vibe on a recent Wednesday night is laid-back college radio. Lilly Estenson, K-CHUNG’s former general manager and a recent Scripps College graduate, is in the middle of her hour-long set, broadcasting a panel discussion on feminism and women in art that she’d recorded and edited down. DJs enjoy the freedom to feature pretty much whatever they want, whether it’s a program dedicated to the plight of adjunct college instructors in L.A. or “Slam Dunx from the Free Throw Line,” in which DJ Lady C holds forth on pro basketball between and over complex remixes. And of course there’s music, everything from underground hip-hop to avant-garde noise. Last year the Hammer awarded the station a residency, and K-CHUNG returned to the museum this summer as part of the Made in L.A. show that’s also hosting LAMOA.

Success may be a good thing, but K-CHUNG almost came to an end after its first year, with Bothwell feeling tapped out from the work and the time he was committing. He handed down an ultimatum: Something would have to change, or he’d deep-six the whole thing. The response was to divide the labor and set up a fee system: DJs and volunteers would pitch in $10 each month for rent and ancillary costs.

Earlier this year the station started working with the Pasadena Arts Council to receive grants and tax-exempt funding. How to use the money will be determined by everyone at the station; letting consensus reign is one way K-CHUNG keeps the culture of experimentation and openness intact. “Solomon said he’s seen a lot of projects and spaces live and die by one person,” Estenson says. “He wants K-CHUNG to evolve and to have whoever has the time and energy to work on it to help it change. We are all for that.”

Könitz, the founder of LAMOA, is more ambivalent about the success of her own project. During her run at the Hammer, showing LAMOA-related works, Könitz also relocated the entire kiosk-size structure to Pasadena for a temporary residence at the Armory Center for the Arts. But changing and evolving may not be part of LAMOA’s future. “I haven’t made up my mind about how long LAMOA will be up for. I don’t think it will be forever,” Könitz says. When the time comes, there’ll be a cluster of other spaces ready to set up their easels to practice the art of living dangerously.