Home Pop Culture Magic Johnson’s on a Tear and Lakers Fans Might Want to Avert... 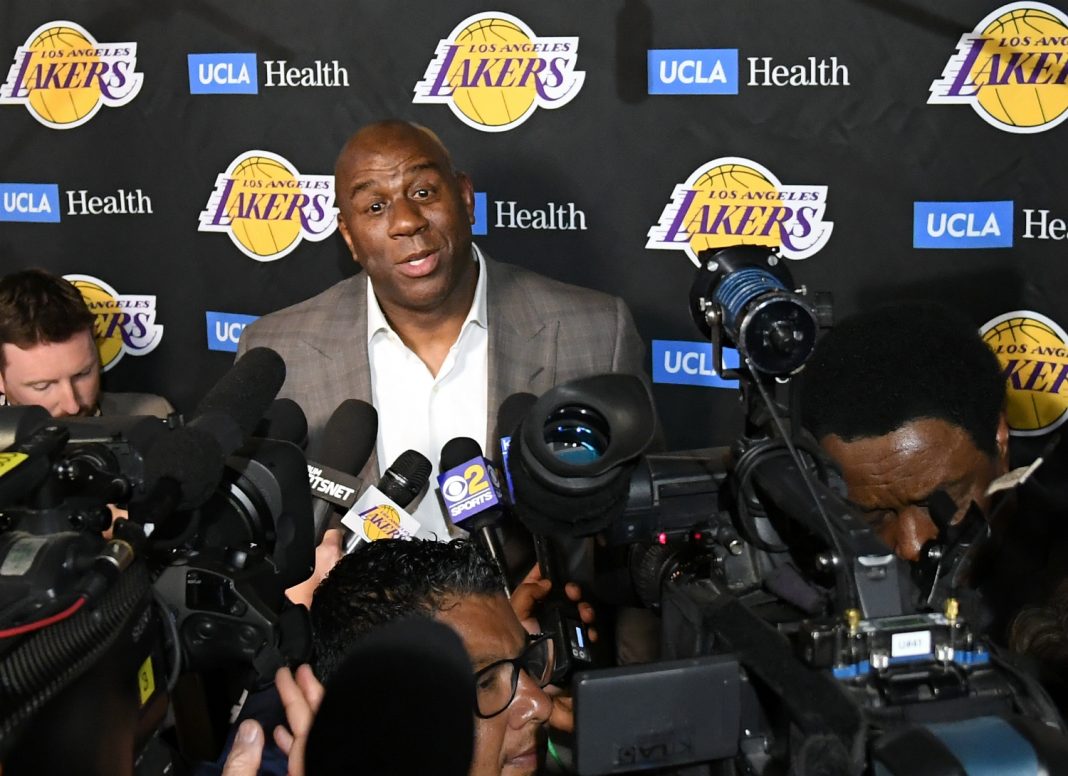 Set aside for the moment, if you can, the daily—strike that—hourly, instances of ugliness, backbiting, and head-scratching decisions being made within the Lakers organization. (Hiring Jason Kidd? I can’t even. Who can?)

Sidestep, if you can, the rabbit hole that leads to a Madhatter’s tea party of pettiness and power plays, family intrigues and machinations that seem to have put a pox on the House of Buss, the family dynasty that has controlled the Lakers since 1979.

In short, look away, for the time being, from the granular details of the seismic disaster that the franchise, once the gold (and purple) standard of the NBA, has become and ponder the deep pain, sorrow, and heartbreak of but one car in the ongoing train wreck: Magic Johnson—Lakers untouchable, Father of Showtime, he of the million-watt smile, cuddly delivery, and killer court instinct—resigned as president of the team and then touched a torch to the bridge on the way out.

Not only that, he paused to toss a can of gasoline during a Monday interview on ESPN’s First Take, a jaw-dropping airing of grievances in which he shredded Lakers general manager, Rob Pelinka, and took a couple of veiled swipes at a woman he has said is like a sister, team governor and controlling owner, Jeanie Buss.

Call in the smoke jumpers, for the fire continues to rage.

In the meantime, it’s hard not to feel the way we do when a beloved band breaks up for reasons neither we nor they can recall exactly. Or when a Michael Jordan leaves the Chicago Bulls—and to some extent, Chicago—with more championships begging to be claimed. When a couple we thought was so cute, so solid admits that, yes, they too are splitting.

More will come out in the weeks and months to come. And who knows? Maybe from these ashes, the franchise will rise like a…well, not Phoenix. Like a no-look alley-oop from Magic?No, not that either. Like I said, sad. At least there’s LeBron, who would never leave a city for which he professed love. Oh, wait.

RELATED: LeBron’s Move to L.A. Was All About His Next Phase in Hollywood