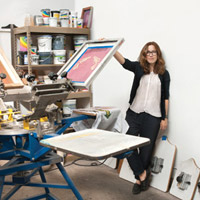 While Pacific Standard Time showcased art in Los Angeles from 1945 to 1980, Made in L.A. offers a portrait of the city’s arts scene as it’s happening now. Spread across three venues—the Hammer Museum in Westwood, Barnsdall Art Park in Los Feliz, and LAXART in Culver City—the exhibition, which runs June 2 through September 2, features 60 local artists: some emerging, some established though not > widely known, all poised for broader exposure. It also serves as an official arts biennial for a city not always appreciated for its creative offerings beyond film. One lucky artist will receive $100,000, no strings attached, with visitors voting on the winner. Among those competing is Kathryn Andrews, who has three sculptures in the show but has worked in various media, including prints, painting, and performance. “These kinds of exhibitions are important because they take this creative activity that’s often invisible,” she says, “and make it obvious and accessible.”

In addition to paintings, installations, sculptures, and tactile pieces, there will be dances, films, performances, and conceptual works. For one weekend the Venice Beach Biennial, a cheeky reference to that other arts festival, will embed artists on the Venice Boardwalk. The Wilmington arts collective Slanguage will take over LAXART for three months, hosting workshops and a one-day festival. The idea is not just to display finished works of art but to examine the process of being an artist. “It’s a very interesting time to be doing an exhibition like this,” says Cesar Garcia, a curator at LAXART. “I think it will bring people here and make L.A. a focus in the world of large-scale biennials.”