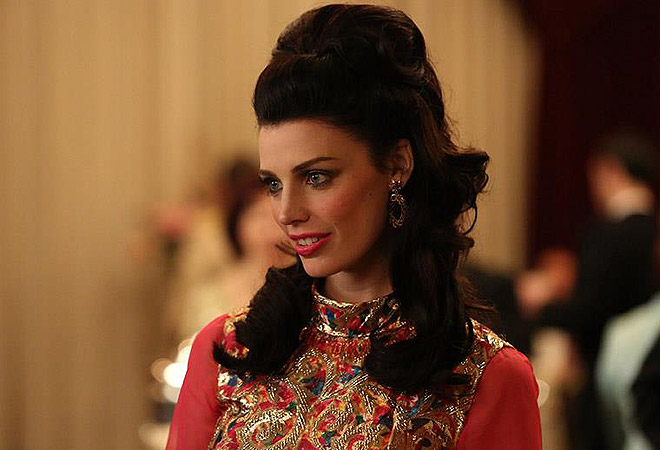 When punch-drunk-in-love Don Draper presented a ring to his secretary Megan Calvet, in the season four finale, the willowy brunette with the fetching smile was still an enigma. Was she a gold digger? A corporate opportunist? Another of Don’s disposable conquests? Among fans, the impulsive move left many asking: Will she even be here when the show returns?

They needn’t have worried. Jessica Paré’s gamine grace and her ability to handle both Don and his clients has earned her the admiration of fans—if not the undying fidelity of her husband. Here are our favorite Megan moments, from the receptionist’s desk to the fabulous Upper East Side apartment.

1. The Milkshake Mishap – Don hires Megan as an emergency nanny for a Disneyland trip and winds up with so much more. Remember Megan’s no-sweat reaction when Sally spills her milkshake? Imagine a typical Betty response (check out Sally’s terrified expression), and it’s easy to see why Don compares Megan to Maria Von Trapp. Watch his face, and you can see the exact moment this single dad finds his kids a stepmother.

3. Sexy Housework – Megan’s fury when Don doesn’t appreciate her trucking in all his coworkers to trample his new white carpet manifests itself in one of the show’s kinkiest scenes to date, and proves who’s in control (temporarily) of the Draper marriage. “You don’t get to have this,” she snarls at Don before succumbing to some spectacular make-up sex. Meow.

4. Love In An Elevator – After an awkward elevator encounter with Don’s former inamorata makes it clear he was cheating on Betty, Megan draws a line: He’s married to her now, and those playboy shenanigans won’t stand. For those who predicted a hasty end to Don’s rebound marriage, Megan’s assertiveness proves she’s not going to turn a blind eye to Don’s extracurricular activities—and she’s not going anywhere.

5. The Perfect Pitch – Tipped off in the ladies’ room that Heinz plans to fire SCDP after dinner, Megan whispers the news to Don and uses her married-couple telepathy to hand him the perfect set-up for their “Some things never change” tagline. She credits Don with the genius pitch, saving the account and ascending to advertising goddess status in Don’s eyes.

6. Outfoxing Betty – When Betty lashes out at Don’s “child bride” by telling Sally about her dad’s first wife, Don places a furious call to Betty before Megan’s cooler head prevails. She knows they’d just be falling into Betty’s trap. Following Megan’s lead, Sally sweetly lies to her mother and pudgy Betty throws a tantrum. Round one: Megan.

7. With Friends Like These – After a fellow actress pleads for a leg-up in a commercial SCDP is shooting, Megan appeals to Don – then snags the part for herself. Megan swears she’s perfect for the “European type” they want to cast, but the helping hand from Don ends up costing more than just a friendship.

8. Baby Blues – By season six, things look a bit rocky in the Draper marriage. Megan confesses to Sylvia, her neighbor (and Don’s secret paramour), that she’s relieved about her recent miscarriage—and that she still hasn’t told Don about the pregnancy. That bodes well for a happy union.

9. Megan Has An Affair (On Set) – In season six, Megan’s soap opera career is taking off, but when she has to do a love scene her husband doesn’t take it well. Paying a surprise visit to the set, Don compares Megan to a prostitute. The former spitfire pushes back, but she mostly cries and takes it. We can’t imagine what’s going to happen when she finds out he’s the one having a real affair.