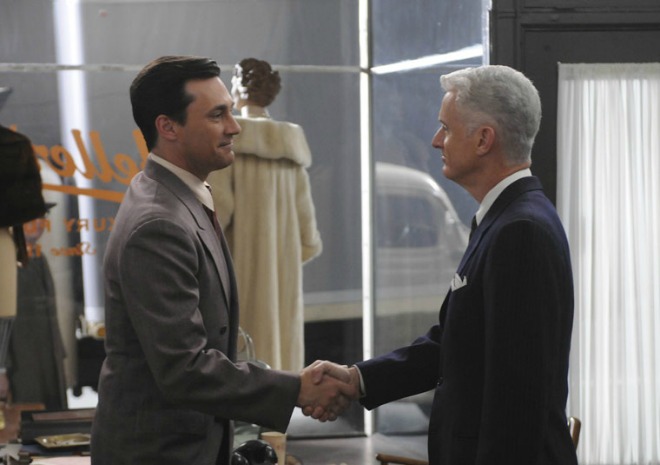 One of the worst years in American history is over. It’s time to move forward.

1969 lies around the corner in the Mad Men universe, its summer packed with historical markers: the Stonewall Riots in June (can we please, please bring Sal back for this one?), the Chappaquiddick incident in July, Woodstock and the Manson murders in August. Joan Didion wrote that many people believe the ’60s died on August 9, 1969, “ended at the exact moment when word of the murders on Cieolo Drive traveled like brushfire through the community, and in a sense this is true.” Matthew Weiner has debunked the Megan-Draper-as-Sharon-Tate theory, but with two partners staking a claim in California, the grisly slaying could well prove the historical climax of the season.

Matthew Weiner has always insisted he knows what the series’ final shot will be, but he claims not to know how he’ll get there. Andre and Maria Jacquemetton, the show’s executive producers, convinced him not to withhold material for season seven, and in his multitude of post-season interviews, he claims he hasn’t started thinking about it yet. Mr. Weiner, we know you don’t read recaps, but if any of your assistants peruse, here’s our combo wish and prediction checklist for season seven. Drum roll, please.

Peggy becomes Creative Director. The pantsuit shot in the finale set it up. With Don taking an indefinite leave of absence and Ted marooned in California, it’s time for a creative coup-d’état. Her personal life is a wreck, but we can’t quite believe Weiner will always be so cruel (at least, we hope not). With Stan discovering professional ambition (a deal breaker for any serious Olson suitor) and stymied from homesteading in California, perhaps the drafting table is laid for a partnership of equals. We’re still holding out for that bittersweet glimpse of her lost progeny on a Brooklyn playground.

Joan and Roger form a modern family. Bob Benson’s presence at Thanksgiving was Joan’s insurance policy against Roger’s wheedling charm. She grew up a long time ago, and Roger never will. We believed her when she called off their affair in season four, but with Roger back in Kevin’s life, maybe the silver fox will teach his son the real secret of advertising success: how to cup a client’s balls.

Megan heads to California. Anything could happen to the Draper marriage, but we really like the idea that Don may have torpedoed it himself without any help from Sally. Megan quit her show and her agent lined up a bunch of meetings—without Don or maternal warmth to tie her to New York, perhaps the flower child Don envisioned at the Hills party will materialize. Minus the pregnancy and Stepfordian aspirations, of course.

Sally finds romance with Glenn. Call this more a plea than a prediction. We’d hoped the comrades-in-arms would hook up this season, and Sally wasn’t the only one who wilted at Glenn’s aside (“She’s like my sister”). Ouch. But he did stop making out with a boarding school tart to jump to her defense, and he looked suitably dashing in that army jacket. Not a trace of creepster neighbor kid. Fingers crossed.

Teenage Dick hits the road. Thanks to season six’s plethora of flashbacks, we’ve pieced together most of Don’s childhood to learn how Dick got from a dirt-poor farm to a flophouse. But how did that solemn whore’s son ascend from a Pennsylvania brothel to a cheery used car salesman? And from there to glad-handing furrier, and then to king of Madison Avenue? Don’s Gatsbyesque climb deserves screen time.

Don gets clean and comes clean. Thirteen episodes allow for plenty of backsliding, but with Don’s AA-worthy confession to the Hershey execs, we believe season seven will follow his gradual, faltering recovery. The entire show has been built around the dissonance between who Don says he is and who he actually is—the Hershey conundrum—and how selling himself every day makes him a genius at advertising, and how he bridges that gap with sex and alcohol. He’s removed the alcohol, and now the whole facade is crumbling. For Don to really recover, he might need to get out of the advertising game. We can envision a season finale where Don returns to California—single, alone, unemployed, but finally at peace—and begins life anew, this time as Dick Whitman. Perhaps that final shot Weiner dreams about will be Don striding into a government office to clear up his record.