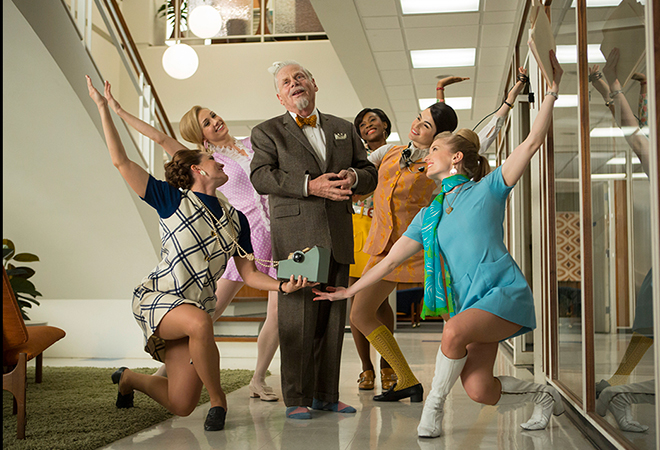 It may sound unseemly since the episode featured the deaths of Bertram Cooper and Don’s marriage, but casualties aside, not since “Shut the Door. Have a Seat.” have we seen a season finale so flush with optimism. Despite the ominous title, “Waterloo” was foregrounded against the successful Apollo 11 moon landing, an event that left Americans gee whizzing at our national ingenuity and filled with a sense of unbridled possibility. Despite their very terrestrial concerns, Mad Men’s characters found time to set aside petty conflicts so they could marvel at the majesty of space and human accomplishment.

All this positivity seems a bit out of step with a half-season that saw Don hit his professional rock bottom (and to a lesser extent his personal one) and sent one member of SC&P’s staff to the mental ward. At the risk of sounding like insensitive jerks, we’ll even hazard that the show’s sentimental send-off to Broadway veteran Robert Morse, a dapper rendition of “The Best Things in Life Are Free” complete with never-before-seen secretarial back-up dancers, verged on self-indulgent. The enthusiasm might all go downhill in the final half of the season—the end of the 1960s was a brutal comedown—but for now, let’s take the developments one at a time.

After seasons of cracking wise about his own decaying status, senior partner Bert Cooper really does bid farewell. His passing, timed to coincide with the successful touchdown of Apollo 11’s mission, reminded us of Miss Blankenship’s sudden death in season four. “She was born in a barn and died in a skyscraper,” Bert said then of the career secretary. “She was an astronaut.” Cooper dies at home on his couch watching the spacemen, having steered his agency through several difficult transitions. But before his departure he reserves a few choice words for Roger, who’s distraught over Jim Cutler’s plan to cut Don out of the agency for breach of contract (which, you’ll recall, expressly forbid bursting in on clients with unvetted spiels, i.e., the Commander cigarettes stunt). Bert explains that while he may wish his troublesome creative director gone, as a leader he must back up his team—and that includes Don. Roger has talent and skill and experience, but he’s no leader, Bert says serenely.

Don’s professional showdown comes down not to tussles with Lou about genius versus mediocrity, but to his colleagues and the balance of mercy and justice. Despite a long history of having each other’s backs, Joan wants Don gone because she’s fed up with the costly ramifications of his Tarzanian impulses. Pete wants Don to stay because he sees Don’s potential for brilliance at his best moments, and because he identifies with Don’s marriage woes. (“Marriage is a racket,” he fumes upon hearing of Don’s breakup with Megan.) Cutler wants Don gone because he wants to be king, and because he is “deeply unimpressed” with the unglamorous reality behind SC&P’s prize pony. Harry doesn’t get a say.

The pater familias’ death sets in motion Roger’s last-ditch effort (perhaps due to the stinging truth behind Bert’s words) to pry his inheritance from Jim Cutler’s grasping fingers and keep his best friend at the agency. Although SC&P was born in season three to forestall an imminent buyout by McCann, Roger returns to the rival monolith in a desperate deus ex machina maneuver. He out-hustles Jim, and since McCann wants the team that won Chevy, his effort rescues Don and prevents Ted from following through on his vow to quit the advertising game. Everyone is happy: Ted sticks around, preventing what was sure to be a dismal, Peggyless slide to an early grave; Joan and Pete get rich after all; and even Jim is pleased. “It’s a lot of money,” he says after adding his vote to those cast against him. Sterling: 1; Cutler: 0.

It turns out Megan and Don didn’t need a fondue pot to nudge their faltering marriage over the cliff; just the prospect of Don moving to California full-time is enough to force her to sober honesty. In a conversation that transitions rapidly from subtext to text, Don and Megan discuss Don’s imminent ousting from SC&P. (Don: “They want me to move on.” Megan: “Maybe you should. Aren’t you tired of fighting?” Don: “Yes.”) “I’ll be fine,” Megan tells Don after rejecting alimony, and she’s right. Unlike the first Mrs. Draper, Megan doesn’t need a man to justify her existence. Her turquoise bikini and sunny “hello” when Don calls tells the whole story: Megan has already forgotten him, and their bittersweet parting over the phone only seals the deal.

Megan isn’t the only one who needs a stiff drink for courage. Don’s encouragement to Peggy to deliver the Burger Chef pitch also becomes a peace offering of sorts. He’s right that with his possible departure from SC&P, the business would be better won by someone whom the clients will still see at the office. But it’s also a perfect way to heal old wounds. Burger Chef is potentially Clio-caliber work, and Don, who previously cut Peggy out of Glo-Coat and St. Joseph’s Aspirin, lets her take full credit for it. “That’s beautiful,” the Burger chief trembles after she delivers the pitch. It comes as no surprise when she wins the account.

It even appears—could the gods be so merciful?—that Peggy’s personal life may have taken a wobble forward too. The hunky repairman who leaves Peggy his number astutely notes that she has lots of books, and sounds impressed when she explains that she owns the building. He would certainly make a more adept co-landlord than Abe, who could barely wield a staple gun. And despite Peggy’s frequent complaints about Julio, the upstairs kid and TV moocher, Peggy’s tearful reassurance about his move to Newark echo her own absent child. Julio is the living embodiment of the alternative family she described in her Burger Chef pitch.

At the Francis residence, Sally is primed for a summer fling with the shirtless son of her mother’s college friend, primping her hair and lipstick en route to her lifeguard gig. But after parroting the older boy’s rantings against the moon landing to Don—how can politicians squander money on novelties with so many problems at home?—her father deflates her with the  admonition that she sounds too cynical, which is sort of like hearing from Nick Nolte that you party too hard. Instead of the dreamy army-jacket-Glenn lookalike, she swoops in on his sweet, nerdy younger brother who, like her, shrugs off the grown-ups and prefers to stake out his telescope. In an episode that frequently referenced Sally’s resemblance to Betty, the former eschews an age-appropriate crush to plant a confident kiss on a younger boy, hearkening back to Birdie’s lock-of-hair weirdness with Glenn in season one. (And then Sally crosses her arms and takes a puff on her cigarette… just like her mother.) But for a brief moment, let’s celebrate Sally’s preference for the earnestness of youth over the false jadedness of teens.

“No man has ever come back from leave, not even Napoleon,” Cooper explains to Roger. “He staged a coup, but he ended up back on that island.” Cutler’s campaign should have been Don’s Waterloo, but he beat the odds. Don is back in the fold, for as long as there is one. There’s still plenty of time in the season’s final half for our characters to give in to their weaker selves and derail their futures. But for now, it seems Matthew Weiner is subscribing to a decidedly sunny view of human possibility and redemption. We might get to the moon after all.